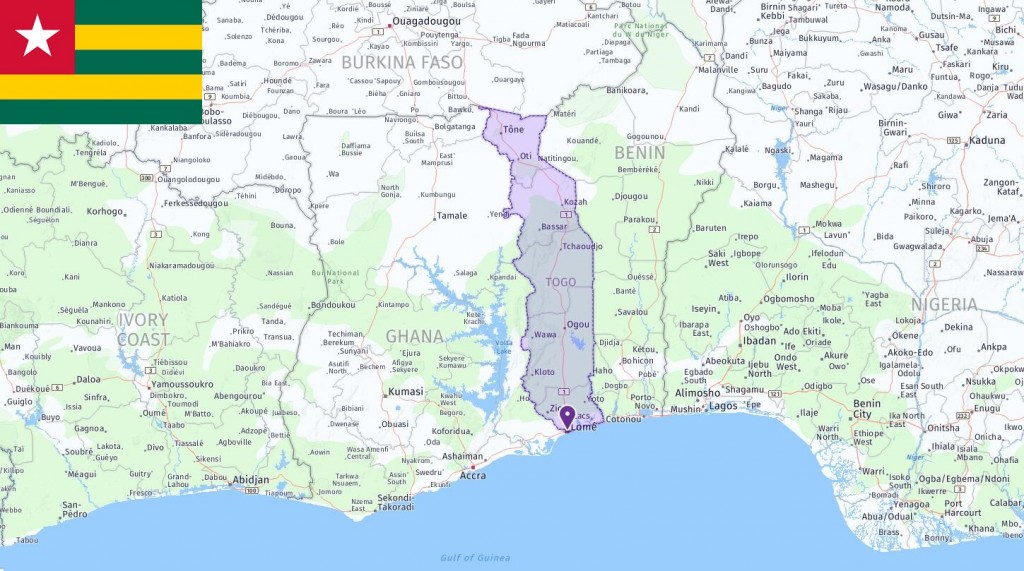 The most commonly used abbreviations about Togo are TG which stands for Togo and XOF which means West African CFA franc (Togo currency). In the following table, you can see all acronyms related to Togo, including abbreviations for airport, city, school, port, government, and etc. 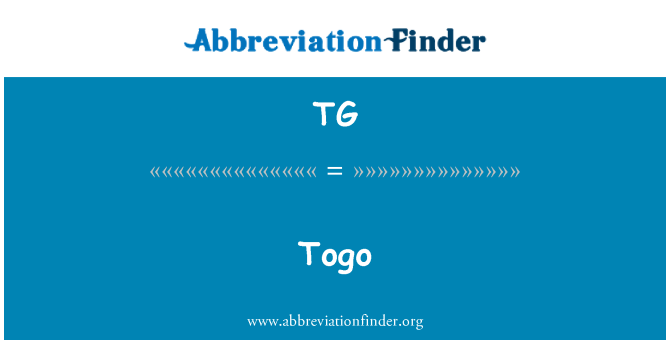 Togo is long and narrow, stretching from the coast and far into the African continent. This means that the country has six different geographical regions. The climate is dominated by the equatorial rain belt and moist onshore wind. Both rainfall and temperature are relatively similar throughout the year and are at 25-30 degrees. Savannah is the dominant vegetation. In the south, large trees grow, while the savanna becomes more steeped in the north. In the south and along the rivers, tropical rainforests grow, while there are mangrove forests at the coastal lagoons. Togo has almost 200 mammal species. Elephants, lions and cheetahs are found in the north, but are in danger of being eradicated. So does the hyena and chimpanzee. More than 625 bird species have been observed in Togo, among them 50 birds of prey.

Over two-thirds of Togo’s energy needs are covered by charcoal, and have major environmental impacts. In addition, pig farming is run. This leads to deforestation and soil erosion. The hygiene conditions are poor in many places, and there is a lack of clean water. Air pollution is increasing in cities, but the environmental situation has improved somewhat, because garbage management works better.

The land area that is Togo today has been inhabited since prehistoric times, and has been ruled by various tribes and civilizations. From the 16th century, Togo has been part of international trade along the coast. Originally, the trade was run by local tribes, but it was later taken over by Europeans.

At the end of the 19th century, Togo became a German colony, despite opposition from the inhabitants of the country. The Germans built railways, port facilities and plantations. Forced labor and hard taxes became a reality for citizens. The Germans were driven out of Togo during the First World War, and after the war, the country became a mandate area under France, on behalf of the League of Nations.

The country gained internal autonomy in 1956, and independence in 1960. In 1963, Gnassingbe Eyadéma took power by a coup. He made Togo a one-party state, and ruled the country uniquely. In the 1990s, political turmoil and international pressure led to a new constitution that introduced a multi-party system. No real steps toward democracy occurred until Gnassingbe Eyadéma’s death in 2005. Then his son, Faure Gnassingbe, took power. This was in violation of the Constitution, and the takeover of power led to violent clashes and sanctions from the international community.

Togo is governed today by the Constitution of 1992. The president is elected directly every five years and can be re-elected as many times as he/she wants. The President appoints the Prime Minister. The National Assembly, which is the Togolese legislative body, is also elected every five years. The elections held during Eyadéma Gnassingbe’s reign were permeated with electoral fraud. The first presidential election Faure Gnassingbe won was also contested, but later elections have been considered free and fair by international observers. Oppositions in the country have nevertheless protested against the election results.

Recent years have been characterized by political turmoil and major demonstrations, where protesters have been killed and arrested. The protesters’ most important requirement is for Faure Gnassingbe to step down, and for restrictions to be imposed in the Constitution on how long a president can sit in power. Togo is characterized by rivalry between the two peoples ewe (south of the country) and cabré (north of the country). Ethnic divides have played a somewhat minor role in politics in recent years.

Togo’s economy is characterized by colonial times and political turmoil in the country after the liberation. The cotton and phosphate industry that was built up during the colonial era remains the country’s most important export goods. Most of the population work in agriculture, which is still the most important part of the economy.

The Togolese economy has many problems. Transport problems and power failure problems hinder the development of the industry. The lack of democracy and political turmoil has led both aid organizations and foreign investors to stay away from Togo for a long time. These difficulties have also caused the black sector of the economy to be large, and Togo remains one of the least developed countries in the world.

Extensive economic reforms have been implemented since Faure Gnassingbe took power. The port of Lomé has become an important trading hub in the region. Several donors have resumed assistance to the country, and parts of the foreign debt have been deleted. In recent decades, agricultural productivity has increased because farmers have started to use fertilizers. In recent years, Togo’s economy has therefore grown.