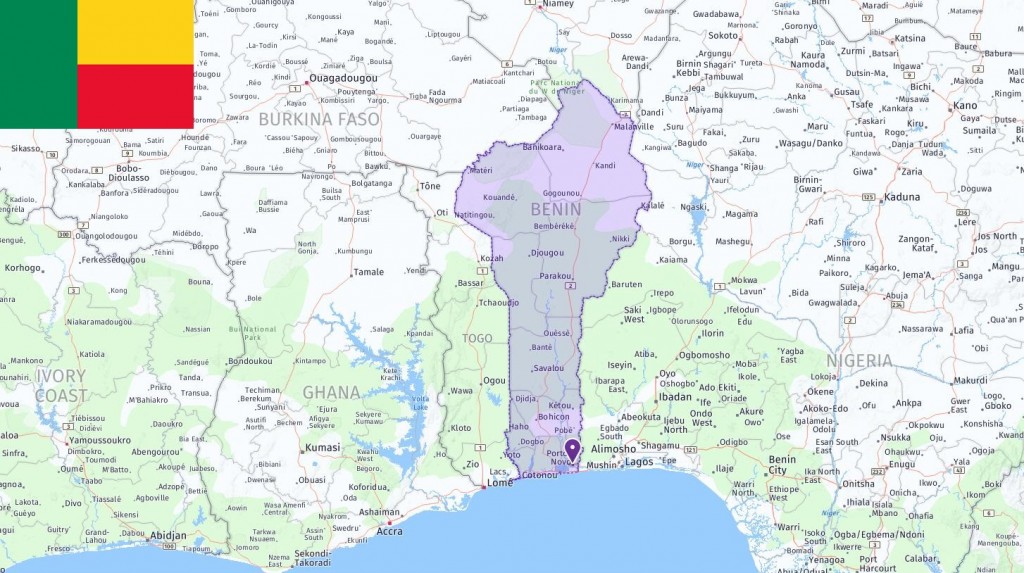 The most commonly used abbreviations about Benin are BN which stands for Benin and XOF which means West African CFA franc (Benin currency). In the following table, you can see all acronyms related to Benin, including abbreviations for airport, city, school, port, government, and etc. 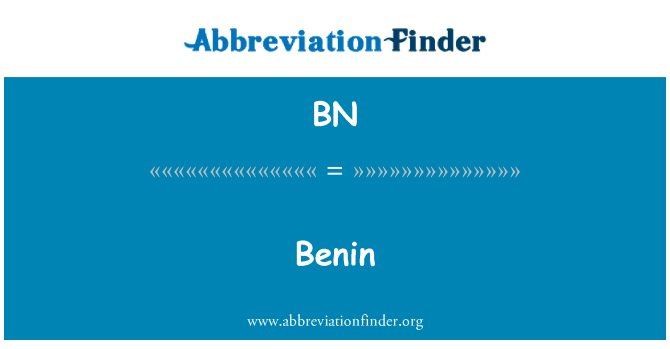 Benin is a small West African state located on the north coast of the Gulf of Guinea. Along Benin’s narrow coast there are sandbanks and many lagoons. The terrain consists of flat hills and a lot of fertile soil. The country’s highest point, Mont Sokbaro, is 658 meters above sea level.

The climate is hot and humid. There is tropical climate in the north, and drier to the south. The drought period lasts from December to March, and from March to July it rains heavily. From July to September it is dry again, while the rainy season is back from October to December. Benin has relatively little forest. Droughts and forest fires have destroyed 59 percent of the forest previously held by the country.

The country’s history is characterized by kingdoms, alternating colonial powers and an extensive slave trade. Benin’s coast is part of what was formerly known as the slave coast. Slaves were sold and sent across the Atlantic to work. The colonial powers of Portugal, France and the United Kingdom wanted to control the area, but in the 19th century Benin became a French colony.

After World War II, the country continued to be ruled by France as part of French West Africa. In 1960 the country became independent under the name Dahomey. The first decades after independence were troubled. Constant military coups made it difficult to push politics in the right direction. From 1972, the country was ruled by a dictator, Major Mathieu Kérékou. He declared the country a one-party Marxist-Leninist state. Kérékou remained in power from 1972 to 2006 and eventually got the nickname “Chameleon”. The reason is that Benin succeeded in going from being a militarily controlled one-party state to a democratic multi-party state under the same leader. This happened during a referendum in 1990, when the country was given a new constitution. Thus, Benin became a free democracy.

In the fall of 2010, Benin was hit by the worst flood in over forty years. More than a quarter of the country was under water, and 200,000 people were forced to flee their homes.

Benin is a republic where the president is elected for a term of five years and can be re-elected twice. The president heads the government and appoints the ministers themselves, who must be formally approved by legislative power. The National Assembly has 83 members and is elected for four years. The country has been praised for being one of Africa’s most stable and democratic societies since 1991, but the 2019 elections were not free and fair because opposition parties were not allowed to participate and the internet was turned off on Election Day.

Fundamental human rights such as freedom of expression and freedom of the press are respected, and the country’s ethnic groups and religious communities live peacefully side by side. Oppositional activity, trade unions and voluntary organizations are recognized in Benin’s 1990 constitution and do not experience oppression. But the country also has many challenges. Benin is one of the poorest countries in Africa and corruption is widespread, as well as health problems such as malaria and AIDS. Benin has also had border disputes with its northern neighbor Burkina Faso. Three out of four in Benin live for less than $ 2 a day and one in four does not have access to clean drinking water. The situation has gradually improved over the 2000s.

Despite economic growth in recent years, Benin is a poor country. The economy is mainly based on agriculture and trade. Trade with neighboring countries is important, especially trade with Nigeria. Agriculture represents about one-third of the value creation and the entire income base for around half of the population. The agricultural sector consists mainly of small farms, which grow food for self-storage and partly products for sale. Benin’s exports mainly consist of cotton and other agricultural products such as palm oil, coffee and cocoa. Benin is one of Africa’s largest cotton producers.

Benin has limited natural resources, but you can find limestone, gold and also some oil there. Corruption is widespread, and efforts to combat public corruption have been a banner issue for several presidents.