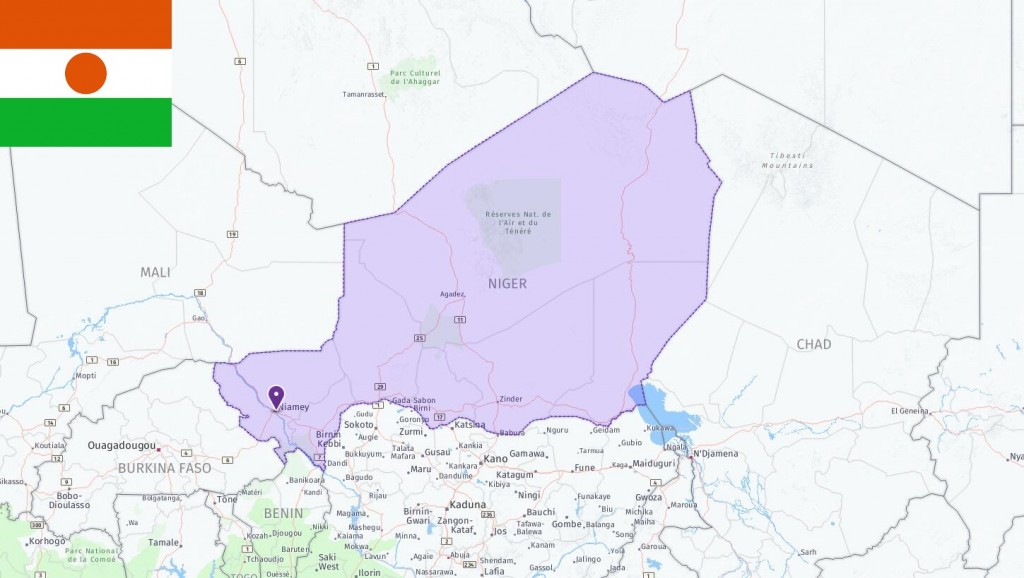 The most commonly used abbreviations about Niger are NE which stands for Niger and XOF which means West African CFA franc (Niger currency). In the following table, you can see all acronyms related to Niger, including abbreviations for airport, city, school, port, government, and etc. 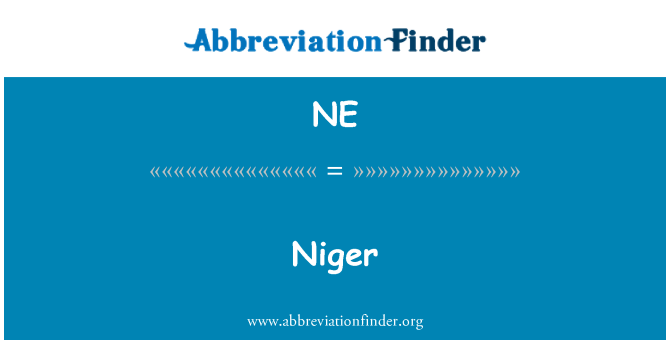 Niger is a warm and flat land without a coast. The Sahara Desert extends into the northern part of the country, and three-quarters of Niger is desert or semi-desert. The areas in the southwest are more fertile, and are adjacent to the Niger River.

The climate in the country is warm and dry and the country is hit by recurring drought. In the southwest there is some rain, but in the desert areas it is so hot that the rain evaporates before it hits the ground.

Water shortages are a major problem, and the amount of water in the Niger River has decreased due to population growth and climate change. On the border between Chad, Niger, Nigeria and Cameroon lies Lake Chad. The lake provides water to more than 20 million people in the surrounding areas. Due to overconsumption and drought, the Chad Sea also gradually decreases.

Niger has little energy supply, only 20 per cent have electricity. Firewood is the most common source of energy, and harvesting firewood leads to deforestation and soil erosion. The country has mining which creates environmental problems, and several areas and water have been destroyed by radioactivity as a result of the mining.

Northern Niger has been inhabited for 40,000 years. From around the year 600, the kingdoms of the Kanem and Songhai kingdoms arose, both kingdoms lasting beyond the 16th century.

France began its colonization of the area in the 1880s, and in 1904 they created the colony of French West Africa, which included today’s Niger. France’s conquests happened quickly and brutally, but the French showed no great interest in the country until uranium was found in 1959.

Niger became an autonomous republic within the French Commonwealth in 1958. When Niger became independent in 1960, Hamani Diori became the first president. The country never succeeded in establishing a stable democracy. For several years, independent Niger has been governed by military coup regimes, and the policy has been marked by strong contradictions and failed attempts at reconciliation. The last military coup took place in 2010.

Since 2010, the country has had two presidential elections, but various corruption cases and lack of press freedom mean that the country is only seen as a partially free country.

Following the military coup in 2010, a new constitution was passed and elections were made. Under the new constitution, Niger is a republic with a multi-party system. The president is head of state and commander-in-chief, but the executive is with the government. The president appoints the prime minister, who appoints the rest of the government. Legislative power resides with a people-elected general assembly. A quarter of all ministers and MPs must be women.

Nevertheless, the elected governments face major challenges. The state’s power is limited to cities, and large areas are lawless. Criminal gangs, drug smugglers and Muslim extremist groups move freely across borders. The problems are exacerbated by the state’s lack of resources and widespread corruption.

Niger is one of the least developed countries in the world. Three-quarters of all Nigerians live on less than $ 2 a day, and half the population is under 15.

Niger is from old divided into two, each with its own history and culture. In the north the Tuaregs live like nomads, in the south there is an agricultural culture. Disagreements and conflicts between different tribes and ethnic groups, about land, water and grazing areas, still characterize the country. The Tuareg Deserts have at times been in armed rebellion against the state to increase their political and social rights, but beyond the 2010 century, Islamist extremists such as the Boko Haram group have caused the greatest problems.

Niger’s economy is based on agriculture and uranium. Eighty percent of the population feed on agriculture. Uranium accounts for half of the country’s export revenue. Niger is one of the world’s largest producers of uranium. Besides uranium, oil, gold and vegetables are important commodities.

This means that economic development depends on prices in the world market and the weather. The country has a large black sector comprising 70 per cent of all economic activity. In addition, there is extensive smuggling of goods across the border to Nigeria.

Niger usually has deficits on both budgets and the trade balance. The country is highly dependent on aid and international loans. The most important donor is France, followed by the EU, the World Bank and the African Development Bank. Economic developments are hampered by political conflicts, the country’s isolated position, high transport costs, barren land, inhospitable climate and a lack of skilled labor.