Boston is an American city with a European feel. Here you are actually encouraged to stroll around the city center and experience the good and friendly atmosphere.

Boston is a very popular destination and more than 12 million tourists visit the city annually. Tourism is important for the region and the city is well equipped to give you value for money, with many interesting museums and attractions, and a story you will not find in any other city in the United States.

Boston is one of the oldest cities in the United States, and is located in the New England region where the first pilgrims from Europe settled.

Boston is often called the cradle of independence and the city had an important role in America’s early history. Here happened the famous Boston Tea Party, a trigger for the American War of Independence, and the Battle of Bunker Hill. And the city has more than culture and history. Not far from Boston is the famous and idyllic holiday peninsula of Cape Cod.

In other words, if you choose Boston, everything is organized for a holiday trip that meets the needs of most tourists.

Get to know Boston

Boston is the capital of the state of Massachusetts, which was one of the original 13 US states. Boston was founded by Puritan colonists as early as 1630, but excavations show that Indians have lived in the area for about 7,000 years.

The Puritans opened the continent’s first public school in 1635, and the following year they opened the first university. This was the world-famous Harvard University, which is still one of the world’s most prestigious universities.

Boston was North America’s largest city until the mid-18th century. In the 1770s, Bostonians rebelled against the ever-increasing taxes imposed by the British on their colonies, including through the famous Boston Tea Party, where colonists destroyed tons of tea by throwing cargo into the harbor basin. This was one of the triggering factors of the American War of Independence (1775-1783).

Several of the first battles of the war against the British occurred in and around Boston, and most famous is probably the Battle of Bunker Hill, which is just north of downtown. One of America’s foremost national heroes is Paul Revere, who rode from his home in central Boston one night to warn the rebels that the British were on their way. For many generations, every American schoolchild could frame poems and songs about Paul Revere.

After the end of the war, Boston became one of the richest and most important port cities in the United States, with export and import goods unloaded on and off. Immigration from Europe exploded in the 19th century, and Boston became a rallying point for Irish immigrants (including the now-powerful Kennedy family), which characterizes the city to this day. The biggest religion in the city is Catholicism.

Boston gained city status in 1822. Large parts of the city’s downtown areas and financial district burned down in 1872.

Boston has evolved into a political hub in both New England and the United States. Despite just under 700,000 residents, Boston is a compact city on an American scale. According to the US Census Bureau, only a few cities across the United States have a larger proportion of residents walking to and from work each day.

The city center can be said to be the boroughs closest to the harbor, with the Faneuil Hall Marketplace and the Government Center Square as recurring points for visitors. Here are the town hall, the two courthouses and several other administrative buildings.

Boston ‘s Chinatown is also part of downtown areas, and the district is mainly covered by Washington Street, Beach Street, Essex Street and Kneeland Street. This is one of the city’s most densely populated areas. Over 70% of the population is of Asian origin, which you can also see in the many restaurants and shops with Asian food and goods, with golden lions, incense scent and dragon carvings.

You are guaranteed to visit Downtown Crossing. This is an old town with pedestrian streets full of shops, market stalls and department stores. Downtown is the area where the city’s residents and visitors go to shop, eat, make friends or have a drink.

North of downtown is the North End, which is really Boston’s oldest neighborhood. In the North End, people have lived continuously since 1630. Today, this is mainly a residential area of ​​limited interest to foreign tourists, if you do not intend to visit the area’s authentic Italian restaurants and Irish pubs, both share a legacy of the city’s first immigrants.

American tourists, on the other hand, have a tremendous interest in visiting historic landmarks such as Paul Rever’s house [see photo first in article] and Old North Church of 1723 located in this district

In the Public Garden you have lagoons, monuments, statues and fountains, and you can take a tour of the city’s semi- legendary Swan boats, which have been around for over 100 years.

Beacon Hill is just north of Boston Common and has been named after the lighthouse that once stood here. Today it is one of the more exclusive residential areas in the United States with many celebrities, and here is the Massachusetts State House, the state’s powerhouse.

The main shopping streets of Beacon Hill are Cambridge Street and Charles Street. These are known for their forties antique shops, delicatessens and exclusive restaurants.

Back Bay and Dorchester

West of Beacon Hill is Back Bay, also one of America’s most exclusive locations. Here are many old brown stone Victorian mansions and some of New England’s tallest skyscraper buildings, such as the 241-foot-high 200 Calarendon Street, formerly known as the John Hancock Tower. The skyscraper’s new name matches the street address.

In Back Bay you will find two of the city’s leading shopping streets, Newbury Street and Parallel Boylston Street. The heart of the district is Copley Square, and here is the beautiful Trinity Church and Boston Public Library.

We will also mention the borough of Dorchester, which is south of downtown. Although now a residential neighborhood without the major attractions, it is known for America’s first and oldest public elementary school, the Mather School of 1639. It is located at 1 Parish Street, Dorchester.

Here lived the Kennedyk Clan, and you can visit the John F. Kennedy Library and Museum if you move east to Colombia Point. There are also the University of Massachusetts and Boston College High School, the Franklin Park Zoo and the legendary old pub Eire Pub, which both Kennedy, Reagan and Clinton have visited, but not at the same time. The address of this old original pub is 795 Adams Street.

The nightlife in Boston is very good and varied, perhaps not so strange considering that there are over 100 universities and colleges in Massachusetts. It is not without reason that Boston is called America’s Athens. In total, around a quarter of a million people study in Boston and neighboring Cambridge alone.

A lot of famous bands in the pop / rock genre have started in Boston, including The Cars, the Pixies, Aerosmith, Extreme, New Kids On The Block, Buffalo Tom and of course the Boston rock band.

Boston is located in the state of Massachusetts on the east coast of the United States and is the capital state. Boston is also the largest city in Massachusetts and a popular tourist destination. 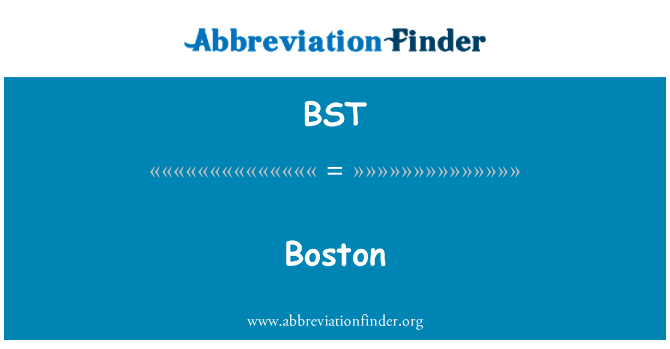 The most commonly used abbreviations about Boston is BST which stands for Boston. In the following table, you can see all acronyms related to Boston, including abbreviations for airport, city, school, port, government, and etc.