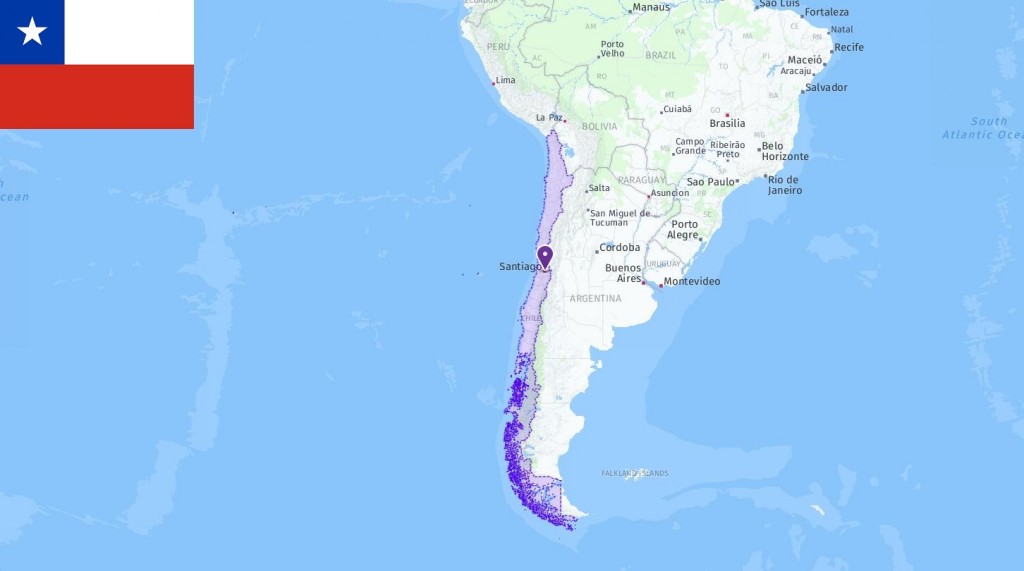 The most commonly used abbreviations about Chile are CL which stands for Chile and CLP which means Peso (Chile currency). In the following table, you can see all acronyms related to Chile, including abbreviations for airport, city, school, port, government, and etc. 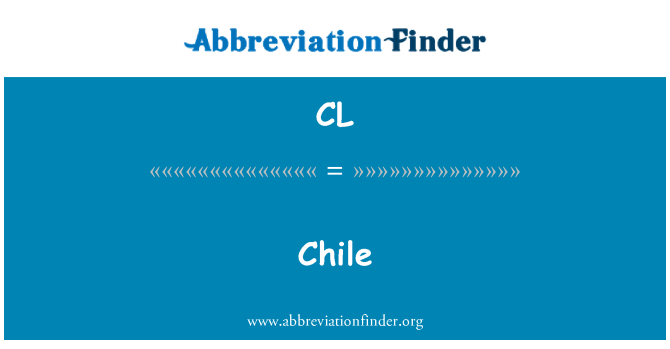 Chile is an elongated and narrow country in South America bordering the Pacific in the west, the Andes and Argentina in the east and Bolivia and Peru in the north. Chile is over 4200 kilometers long and has great climatic variations. To the north lies the driest area in the world – the Atacama Desert. The climate in the south of the country is cool and rainy, and the nature is similar to that found in the Scandinavian countries with spruce forests, fjords, lakes and the archipelago coast. The climate in the country is also influenced by the Humboldt stream, which makes the inland warmer than the coastal areas, and brings with it cold night fog to the steppe lands and deserts in the north.

Since the beginning of the 2000s, Chile has had great success in salmon farming. Unfortunately, the industry has had a negative impact on the environment. Emissions of chemicals and nutrients from the plants have become a major problem for seabed fauna and water quality.

With the Andes as the barricade, nature itself made sure to isolate indigenous peoples in Chile from the rest of the world for a long time. In 1540, Spaniards arrived and the country was subjugated to the Viceroy of Peru. The Spanish encountered resistance from the original inhabitants, but only in 1818 did Chile formally become independent from Spain. Independence was the beginning of a long democratic era that lasted until 1973 with the exception of two periods of anarchy in the 1830s and 1930s.

Salvador Allende, who started several economic and social reforms, sat with power from 1970 until a coup in 1973. The coup was led by General Augusto Pinochet, who, after 17 years of dictatorship and oppression of the people, was forced to hold democratic elections in 1989 The center-left coalition, which was in opposition to Pinochet, won the election and held power until 2010. During this period, there were several coalition presidents, including Michelle Bachelet (Chile’s first female president). When Sebastian Piñera’s right-wing government took power in 2010, he broke the center-left coalition’s 20-year reign. There were student demonstrations and discussions about changing the constitution made by Pinochet in 1980. In 2014, Bachelet returned to power. Bachelet’s second government reformed the education and tax system, but failed to create a new constitution.

Chile is a democratic republic with 15 regions and 346 municipalities. The President, mayors and Congress are elected every four years and cannot be re-elected. The president is the head of state and government and has the right to kick the country’s military leaders. The president elects the government ministers in his government, and legislative power is added to a national congress. Politics is dominated by two major party alliances; Center-Left Alliance Concertación and Center-Right Alliance Chile.

Investigations are still ongoing of people who violated human rights during the military dictatorship. Today, the country is criticized by several human rights organizations for its treatment of the indigenous people of the Mapuche people.

Chile’s economy is among the most stable and competitive in Latin America. Ever since the colonial era, Chile’s economy has largely relied on exports of agricultural and mining commodities. Copper is the most important export commodity, and Chile has been the world’s leading copper producer since the 1980s. In recent years, however, other commodities have taken over parts of the copper’s role and commodities such as fruit, wine, wood and fish are now important export goods. China, the United States, the EU, Peru, Argentina and Brazil are the country’s most important trading partners.

The former military regime led to Chile receiving a relatively large foreign debt. Debt fell sharply in line with the country’s economic growth during the 1990s and 2000s. The well-kept economy and financial sector reforms led Chile to be approved as a member of the OECD Economic Cooperation Organization in 2010, as the first of the South American countries. Despite a good economy, unemployment in the country is high, which can be explained, among other things, by the fact that the expansion of the mining sector did not create more jobs when it was also invested in advanced technological instruments.