Crete is the largest of the Greek islands and has been a tourist destination for northern Europeans for a lifetime. Most people travel from here with good memories and a desire for a quick return. We recommend that you take the time to discover more than Crete’s beaches, as this island is full of mystery and legends as well as having a magnificent scenery. Here is dramatic mountain scenery and varied plant life. Crete will be the birthplace of Zeus and the legends of Ikaros, the Minotaur and King Minos originate here, and a visit to the ruins of Knossos, where Minos ruled, is mandatory.

Crete is the southernmost of the Greek islands and has a mild climate all year round, although it may not tempt you to swim in the sea during the winter months. Snow on the mountain tops is not uncommon. Humidity can be high, depending on how close you are to the coast.

Crete welcomes a quarter of all tourists who visit Greece and most tourists stay on the northern coast of Crete. Although there may be quite a few tourists at times, the people of Crete have been good at preserving their distinctive character and are very hospitable. If you travel up the mountains or the south coast, you can still find areas and beaches that have almost no visitors.

Whether you want sun and bath, dancing and partying, hiking in the mountains or exploring Greek culture and history, you will find what you are looking for in Crete. Everything from families with children to adventurous young people and the elderly who seek peace and quiet have all the prerequisites for enjoying this beautiful Mediterranean pearl.

Get to know Crete

Crete is the southernmost and at the same time the largest of the Greek islands, and the fifth largest of all the Mediterranean islands. Crete has been inhabited for over 7,000 years, and was the home of the Minoans, the oldest European culture of its heyday between 2000 and 1400 BC. Around 65 BC, Crete became a Roman province, before the Byzantines incorporated the island into its kingdom around the year 395.

Eight hundred years later, it was the Venetians who took control before the Turks invaded Crete in 1669. It became a British protectorate in 1898, and only in 1913 did Crete finally become Greek. During World War II, there were hard battles here, when Germany wanted to use Crete as its Mediterranean base.

The people of Crete mostly engaged in farming, fishing, growing olives and sheep farming until the 1970s. Gradually, tourism has become more and more income generating and more and more of Crete’s inhabitants are switching to service professions. But Crete is still first of all the olive oil and agricultural products, with tourism being a good and important number two.

Crete has far more mountains than most people realize. Half of the island consists of hills and mountains, and there are over thirty mountain peaks higher than 2000 meters. The other half is mainly cultivated land, where olives, tomatoes and grapes are produced. The southern coast often rises steeply off the Libyan Sea, with village houses clinging to the hillsides. The north coast flats more into the sea. Most tourists are located along the north coast, especially between the capital Heraklion and Agios Nikolaos, and around Chania.

The differences are also great between the west and the east. The western part has lush and varied scenery. And this is where you will find the best beaches. Here is also the majestic Lefka Ori mountain range and the Samaria ravine. In the east there is much less vegetation. In the easternmost region of Lasithi it is almost empty for tourists.

On the east side of Crete’s northern coast is the Gulf of Mirabello and the small former fishing village of Agios Nikolaos, which has become one of the main tourist destinations in Crete. But it has nevertheless managed to preserve its pleasant and Greek character. Most people think this is an appealing and cozy little town, with its narrow alleyways around the old town square and surrounding bars and restaurants. Around Agios there are many bathers on the beaches.

A few miles south of Agios Nikolaos, on the southern coast of Crete, lies the capital of the Lasithi region. Ierapetra has about 11,000 inhabitants and a history that stretches back more than 3000 years. Both the Dorians, the Romans and the Venetians used it as an important port city, but apart from the fortress on the west side of the harbor it is little historical to see. Ierapetra is quiet and little touristy compared to Agios further north, and this is the only major city on the south coast.

From Agios Nikolaos to Heraklion

The route from Agios Nikolaos via Malia to Crete’s capital Heraklion is perhaps the most touristy, with beach hotels, taverns and bars in a row. Heraklion (also called Iraklion) is by far Crete’s largest city, with around 130000 inhabitants. Here is the island’s largest port, the main airport, and most of Crete’s heavy industry. The city has a 1200 year history, and the Venetian fortress from the 16th century is well worth a visit. The Archaeological Museum has the world’s best exhibition of the highly developed Minoan culture that had its stronghold in Knossos, a few kilometers south of Heraklion.

Five miles west of Heraklion lies the small village of Bali in beautiful surroundings, surrounded by several idyllic bays, hills and sandy beaches. In recent years, several hotels have been built here, and during the high season it can be crowded on the beaches.

The next stop west is Rethymno, which is Crete’s third largest city with about 25,000 inhabitants. This is one of the premier charter destinations, but in addition to a long sandy beach and countless restaurants along the promenade, it has a beautiful old town with a Venetian 16th century fortress and Turkish mosques. On the west side of the old town you can sit on restaurant terraces and watch the sun sink into the Mediterranean.

Two miles west of Rethymno lies the small and idyllic village of Georgioupolis, with its narrow streets of eucalyptus trees around a pleasant square. Here, there is a relaxed atmosphere and a mile-long beach which is ideal for families with children due to its shallow waters. Those who want partying and fun should rather continue three miles west to Crete’s second largest city of Chania.

Chania (also called Hania) [see photo at the top of the article] has around 50,000 inhabitants, and is perhaps the place on the island where you see the clearest traces of the Turks and Venetians who had control of Crete more than four hundred years ago. Here are narrow stone streets, old fortifications, city walls and a lighthouse at the entrance to the harbor which formally screams after being taken postcard pictures. The city’s archaeological museum is well worth a look, and around the harbor it is teeming with restaurants and bars.

About a mile west of Chania lies the small town of Platanias, which has been taken over by Nordic charter tourists in recent years. The beaches are good but very crowded. You almost have no impression of being in Greece, since you get fresh Norwegian newspapers, Swedish meatballs and waiters that are apparently pocket-known in Drammen. Great for those who want sun and beach, but maybe not the place for those who want to experience the real Greece.

Kissamos Bay and southwest of Crete

In the northwest corner of Crete, at the heart of the Bay of Kissamos, lies the small town of Kissamos-Kastelli with just over 3000 inhabitants. This is a quiet and quiet port town almost devoid of tourism, with mostly elderly residents without the need for nightclubs. This whole part of Crete is little visited, with fewer villages, roads and beaches without umbrellas and bars.

In the south-west corner of Crete lies the charming little town of Paleohora on a narrow peninsula. The city has around 2000 inhabitants, some hotels, bars and restaurants, but has not yet been negatively touristed. On a hill above the city lies the ruins of a Venetian fortress from the 13th century, with a great view over the Libyan Sea.

Half a mile east of Paleohora lies a secluded little gem of a city that we hardly want to share with you. Sougia has everything you need for accommodation, eateries and bars, but the place is never cramped and the biggest hotels here only have around 15 rooms! The beaches have some of the cleanest water you will find in Crete. On the other hand, it is quite difficult to get here, which is Sougia’s blessing and curse.

Further east on the southern coast of Crete lies the small port town of Hora Sfakion, which many tourists pass through on their way to or from the Samaria Gorge. During World War II, Hora Sfakion played an important role in the evacuation of Allied soldiers after the Battle of Crete. A few miles east are two nice beach towns. Plakias was originally a small fishing village that has eventually been discovered by tourists, and there are enough residences, eateries and night spots here to have it just as enjoyable for a week’s time. The active visitors can go for walks in the idyllic nature or dive and snorkel in the clear water. The slightly larger village of Agia Gallini normally has far more tourists, although the beach is not the whole world. But you have a good selection of places to stay, and several restaurants and nightclubs gathered in a small town center.

Crete belongs to Greece and is the country’s largest island with an area of ​​8303 square kilometers. The highest point in Crete is 2456 meters, which is almost identical to Galdhøpiggen (2469 meters) in Norway. The mountain with the highest point is called Ida. The “capital” of Crete is Heraklion where about a quarter of the population of Crete lives. 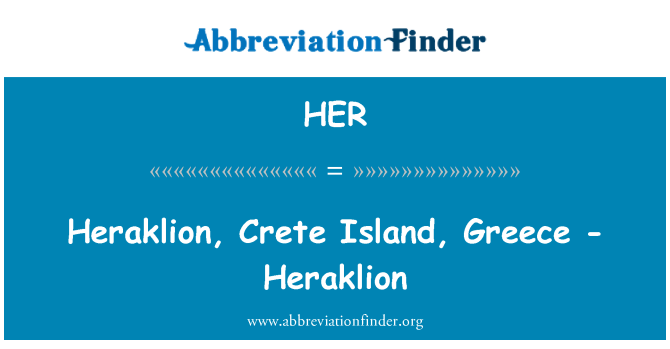 The most commonly used abbreviations about Crete is HER which stands for Crete. In the following table, you can see all acronyms related to Crete, including abbreviations for airport, city, school, port, government, and etc.