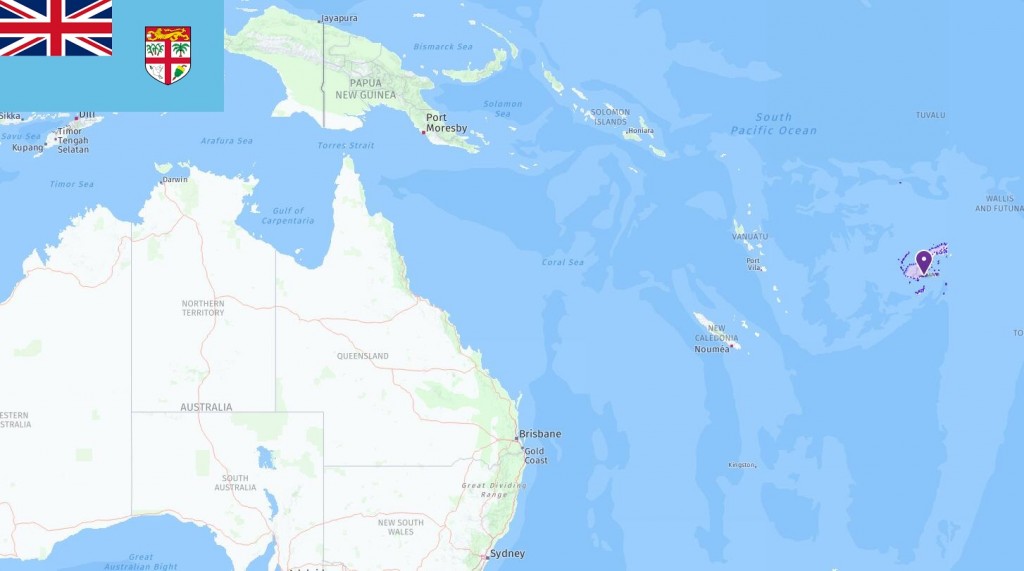 The most commonly used abbreviations about Fiji are FJ which stands for Fiji and FJD which means Fijian dollar (Fiji currency). In the following table, you can see all acronyms related to Fiji, including abbreviations for airport, city, school, port, government, and etc.

Fiji is an archipelago with over 300 islands, with just over 100 permanently inhabited. The country is the most populous of the island states of the Pacific. The largest islands are of volcanic origin, while many of the smaller ones are flat coral islands (atolls) raised from the sea. Fiji has a tropical sea climate with a lot of rain. The southeast trade wind moderates the humid heat and keeps the temperature stable.

Fiji is extremely vulnerable to climate change and is therefore strongly involved in the global fight against them. Many of the islands are a few meters above sea level and are in danger of disappearing as the sea level rises. Because the atolls are flat, a slight rise in the sea can cause large areas to disappear underwater. In addition, salt water penetrates into the soil and destroys fertile land and groundwater. Climate change is also causing more extreme weather, and Fiji has experienced more drought in recent years, as well as more hurricanes and cyclones. Higher sea temperatures threaten the coral reefs around the islands, for an increase of just one degree is enough for the corals to die. As a result, many fishermen lose their habitat and humans an important nutritional basis.

Fiji’s original population came from northern islands in Melanesia over 3,500 years ago, and is called itaukei. By the end of the 18th century, Europeans began to negotiate with the population, and almost emptied the islands of sandalwood, in exchange for firearms. Trade with the Europeans led to several tribal wars in the 19th century. These wars led the Bau Kingdom to grow until all of Fiji was united for a brief period from 1871-74. After that, the country was British colony until 1970.

Ethnic conflict between the Itaukei and Indians has influenced the politics of the country. The Indians came to the islands as plantation workers during the early colonial period. Since independence, the Alliance Party has ruled until the loss of the elections in 1987. Indians then gained a majority in parliament, but the regime was immediately overthrown by a military coup. After this, many Indians emigrated.

Since then, there have been three other military coups, most recently in 2006. After six years of military dictatorship, Fiji was forced to democratize the regime. Still, it was enacted that the military could not be punished for the human rights violations they committed. The first democratic election of eight years was held in 2014, and the party “Fiji first” won by a solid majority. The party also won in 2018.

Fiji is a democratic republic with president and prime minister, where the prime minister has real power. The country has had four different constitutions since 1970 and the last one was adopted in 2013.

Fiji’s policies are characterized by ethnic divides between native Itaukeis and Indians. The former is in power and is in the majority, and there is little likelihood of Indians getting political influence. The military has a lot of political power, and the leaders of the three major political parties have backgrounds from the military. In addition, corruption is a major problem in the police.

In relation to the size of the country, Fiji has a very high participation in UN peacekeeping operations. This has previously been criticized by Australia and New Zealand because of the military dictatorship in the country, and since 2007 the UN has not allowed Fiji to send more troops.

Fiji is one of the most well-developed communities among the small island states of the Pacific, but the political turmoil has caused poverty and unemployment to spread in all peoples groups and in all regions. Many have moved to the slums outside the major cities. Since Fiji became a democracy in 2014, several have come to work. The islands have a young population; almost a third are under the age of 15.

Sugar and tourism export are Fiji’s main industries. The tourism industry is approx. 30 per cent of GDP and employ most.

In 2017, nearly 850,000 tourists visited Fiji, which is as many as it lives there. The tourism industry experienced a sharp decline after the political turbulence in 2009, but since Fiji became democratic, visitor numbers have passed previous records, and are by far the most important sector.

Agriculture and fisheries contributed 15 per cent of GDP and employed about 40 per cent of the labor force.

Fiji also has natural resources, and minerals such as gold, silver and copper are important for the economy. In addition, bottled water is the second largest export commodity after sugar, but the state does not make as much money on the water because it is not taxed to a great extent.