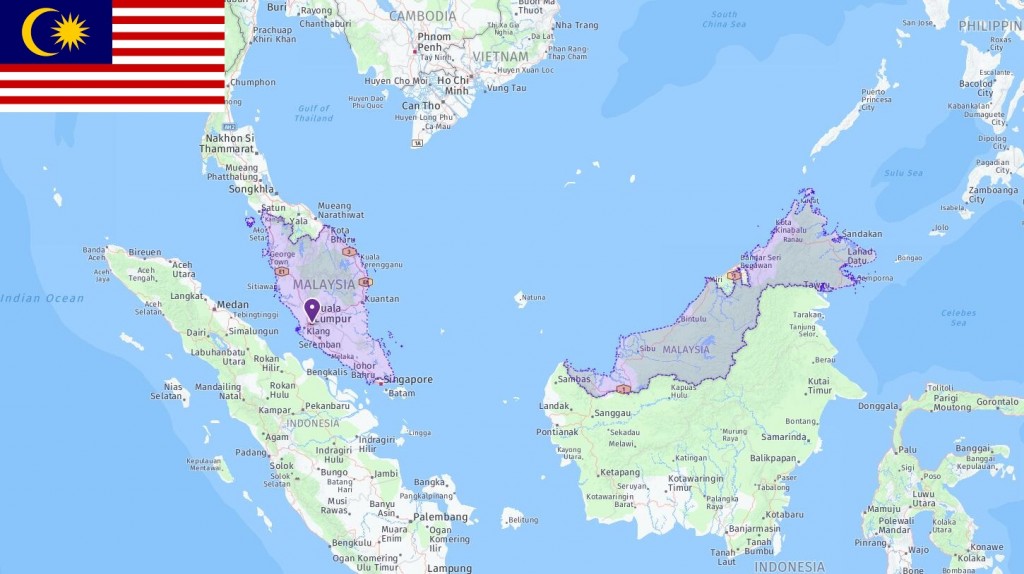 The most commonly used abbreviations about Malaysia are MY which stands for Malaysia and MYR which means Ringgit (Malaysia currency). In the following table, you can see all acronyms related to Malaysia, including abbreviations for airport, city, school, port, government, and etc. 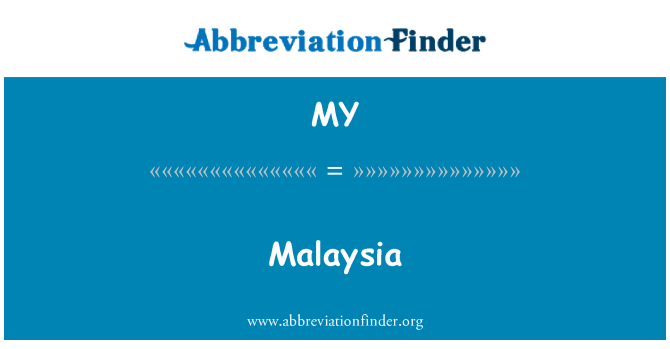 Malaysia is geographically divided into west and east. The western part of the country extends over the southern part of the Malay Peninsula. The eastern part is on the island of Borneo. On the Malay Peninsula, the landscape is characterized by mountain ranges with peaks up to 2,100 meters above sea level. The coast consists of lowland areas that extend inwards towards the mountains. The two borneo provinces consist of fertile lowlands in the northern coastal areas, which extend into hills and upland areas further inland. Farther south form high mountain ranges with peaks exceeding 4100 m. a natural border with the Indonesian parts of the island. Almost two-thirds of the country is covered by tropical rainforest. The climate is tropical, warm and humid all year round. There is most rainfall between September and November.

The biggest environmental challenges in Malaysia are related to shading. The country has a particularly large species diversity, which is threatened by harvesting and clearing of land. The forest and species diversity at Borneo is particularly affected by the establishment of large palm oil plantations. Another environmental problem is polluted drinking water, and air pollution in cities from unregulated emissions from cars and heavy industry.

The Malay Peninsula has been inhabited for more than 6,000 years, and has been divided into many different kingdoms and kingdoms. Around 100 BCE the Malay Peninsula came under Indian influence. In the 1300s, a sultanate (a kind of kingdom) emerged around the city of Malacca, which later controlled the entire peninsula. Through the Muslim Sultanate, Islam became the most widespread religion in the region.

In the 16th century, the Sultanate was conquered by Portuguese seafarers, before the Dutch and British occupied the area. Throughout the 19th century, Britain gradually gained more control over the Malay Peninsula. The British established rubber plantations, and imported Chinese workers as cheap labor. The Chinese minority gradually became dominant in the business world, while the local Malaysian population, and the large Indian minority, were pushed out of business and industrial areas. This became a source of ethnic conflict that still prevails today.

During the Second World War, the Peninsula of Malaya was occupied by Japan, leading to a growing independence movement. After the occupation, violent riots and guerrilla war broke out against the British colonial power. In 1957, Malaysia became independent, but major ethnic differences led to the country’s most Chinese-dominated province, Singapore, declaring independence from the rest of the country in 1965.

Malaysia is a complex country with many cultures, languages, religions and ethnicities. Ethnic Malays make up over 60 percent of the population, Chinese descendants make up about 20 percent, and Indian descendants make up about 5 percent. In the country’s eastern provinces on Borneo, there are over 90 different indigenous peoples. Targeted policies to promote the position of ethnic Malays in society have led to riots and accusations of systematic racism against the minorities. Malaysia has a well functioning health care system and education system. However, women’s position in society is poor, and women are underrepresented in both politics and the labor market.

Malaysia has a strong export-oriented economy. The country exports large quantities of rubber, crude oil, wood and palm oil. Good laws and an open market make the country attractive for foreign investment. The importance of agriculture to the country’s economy has decreased in line with the country’s economic growth. Since independence, the country has gone from being a commodity- producing developing country to becoming a middle-income country where industry and the service sector dominate the economy. Today, the oil company Petronas accounts for about 40 percent of the state’s revenue. Cars, electronics, rubber products and textiles are also produced. Since the 1980s, the tourism industry has also become a significant income for the country.

Malaysia is today among the most prosperous in the region. The percentage of poor people has dropped from around 50 per cent of the population in 1970 to below one per cent today. Prosperity is most visible in the industrialized areas west of the Malay Peninsula. In the eastern provinces of Borneo, and on the eastern side of the Malay Peninsula, industry and infrastructure are less developed. Malaysia is one of the most important members of the ASEAN regional cooperation organization, and has been one of the initiators of the “ASEAN Free Trade Area” which ensures free trade among the ten member countries.