Since package tourism started in the 1950s, Mallorca has been one of the foremost destinations for sun-hungry Northern Europeans. For many, the name Mallorca has become synonymous with charter tourism, sun and bath. It’s no wonder since Mallorca offers more than 80 beaches. It is claimed that most and best beaches are north and northeast of the island. But don’t forget the capital Palma, which is a gem of a big city!

Naturally, Mallorca has a number of coastal resort towns which are exclusively aimed at tourists whose priorities are to swim and sunbathe during the day, and eat, drink and, for that matter, party in the evenings. But be aware that Mallorca has a lot to offer tourists who want to experience nature, culture, golf and big city life on their holiday.

Although the youth has occupied many of the beach towns with techno music and neon lights, time has apparently stood still in the small villages you find on the island. Families with children also have their places in Mallorca, seaside resorts that are perfectly adapted for both parents and children.

The summer months are the best time to visit Mallorca for beach lions (and sloths), in terms of temperature and rainfall. On the other hand, there are also literally millions of other tourists here. And the price of accommodation is significantly higher, especially in August. But Mallorca is also great to visit in the spring and fall. In winter, temperatures can drop to 5 – 10C, and very rarely below the zero point.

Get to know Mallorca

Majorca is the largest island of the Balearic Islands, which is also the westernmost archipelago of the Mediterranean. Mallorca is a self-governed province of Spain and the island has a land area of ​​about 3640 square kilometers and a population of about 780,000 inhabitants.

Mallorca has been inhabited for over 5,000 years but only flourished when it became part of the Roman Empire in 123 BC. During this period both the capital Palma and Alcudia were founded, respectively under the name Palmaria, and Pollentia. Majorca became a Christian in the 500s when the Byzantine Empire annexed the island and the first churches were built at that time. Since then, Mallorca ended up under Arab rule that lasted until 1203.

A brief independent period followed by the Kingdom of Mallorca, before the island became part of Spanish kingdoms such as Aragon and Castile. Already in 1716 Mallorca gained the status of a self-governed province, which it still has to this day.

Palma is the capital of Majorca and is located very close to the airport southwest of the island. If you travel west you will quickly meet famous tourist places such as Palma Nova / Magaluf.

North of Majorca are the tourist favorites Port de Pollenca and Alcudia. On the east coast of Mallorca you will find several sun and beach resorts, including Cala Millor and Cala d’Or. Between these two coastal towns, but a little further into the island, you’ll find Manacor, Mallorca’s second largest city.

North of Mallorca (in and around Pollenca and Alcudia)

If you like spectacular scenery, this is the north coast of Mallorca to visit. Compulsory is the excursion to the Formentor peninsula, which is also Mallorca’s northernmost point. The north coast offers fantastic views and beautiful coastal scenery. Here you will also find some of the best beaches, not least in and around Pollenca and Alcudia.

Alcudia’s sandy beach is 11 km long and known for its cross-country skiing. Perhaps this is Mallorca’s most beautiful beach, and not least it is perfect for children. Here are plenty of opportunities for those who want to practice water sports. The beaches in and around Puerto Pollença often consist of round stones.

Alcudia (60 km from the airport)

On the north coast of Mallorca lies the small town of Alcudia, with about 16,000 inhabitants. Alcudia is located on the peninsula that separates the two great bays of Badia d’Upollenca and Badia d’Alcúdia from each other. In the Middle Ages, Alcudia was an important trading center, a position the city held until well into the 19th century. You can still see the remains of the ancient Roman amphitheater, and the old town is surrounded by over 700 year old city walls.

Take with you the giant Gothic church of Sant Jaume, and the nearby archaeological museum Museu Monographic, which exhibits Roman artefacts.

In the neighboring bay, eight kilometers east of Alcudia, lies the resort of Puerto de Pollenca, with a great beach facing the Mediterranean. This has almost been a British enclave in Mallorca for years, and the place has countless restaurants, bars and hotels. The buildings are relatively low, and especially the car-free area in front of the harbor in the center is pleasant. There is a long bike path from Alcudia to Puerto de Pollenca, which is very popular with cyclists for its fine nature and mild climate.

Puerto de Pollenca is shielded in the north by the scenic peninsula of Cap de Formentor. This is two miles long and is dominated by steep cliffs, where many bird species nest. This peninsula is definitely worth a day trip. At the far end is a lighthouse 260 meters above sea level, with fabulous views. You can also find it from the watchtower Talaja de Albercutx, which was built in the 16th century.

South of Mallorca (from Palma to Andratx)

The south side of Mallorca is naturally dominated by the beautiful city of Palma, which is the island’s capital. Palma is the city for culture, dining, shopping and nightlife. Cala Pi and Es Trenc are within walking distance for those seeking beach beaches.

The holiday colonies here are small. This part of the coast is therefore suitable for a quiet beach holiday without much hassle, but further west on the south coast you will find, among others, the holiday towns of Palma Nova and Magaluf, which are as much known for youthful partying as swimming beaches. You will also find beaches at Arenal and Can Pastilla.

One of the oldest resorts in Majorca is Magaluf [picture above is from Magaluf Beach], a few kilometers west of the capital Palma. Several decades of unrestrained attachment have given Magaluf a somewhat fringe reputation, but today Magaluf will hardly shock anyone. Magaluf may still appeal (significantly) more to youth and English stag parties, but out of high season there is a (fine) alternative for families. Admittedly, it’s not the place you travel to to be highly cultural, but if you want bars and nightclubs, sandy beaches and souvenir shops, swimming parks and resort hotels, then you’ve come right.

In recent years, Magaluf has virtually grown alongside Palma Nova, which is right next door. Palma Nova is considered to have one of the best beaches in the Bay of Palma, and is a much better choice than Magaluf for families with children and the slightly older who do not prioritize discos. A new boardwalk has been built, and the top of this is naturally dominated by dining and beach bars.

Steep cliffs that plunge into the sea and with exciting bays to explore feature the East Coast of Mallorca. Here you will find many tourist towns with beach hotels. This is the area for those who want to practice swimming. And the beaches are good from the bottom to the top of the east side of Mallorca. The area is a sure winner for families with children.

The east coast has small waves and many beaches. Some recommendations are the beaches of Cala d’Or, Porto Colom, Cala Millor and Cala Ratjada.

Cala Millor is the most famous and largest resort on the northeast coast of Majorca. The resort has been a holiday destination for many decades and offers a nearly two kilometer long and beautiful sandy beach with a promenade between the sea and the restaurants and bars. Cala Millor has traditionally been dominated by German tourists.

Most Scandinavians and British people live in nearby Cala Bona, a ten minute stroll north of Cala Millor. Cala Bona is perhaps a more beautiful and quiet town, but unfortunately does not have as nice a beach as Cala Millor. Just south of Cala Millor is the Safari Zoo Zoo, which can be visited by bus, car or a small tourist train.

South of Mallorca’s east coast is this small but popular resort. Originally this was a small fishing village, but now the Cala d’Or feeds primarily on tourism. The building style with low white houses gives the Cala d’Or a distinctive character compared to other cities in Mallorca.

In the marina are rows of beautiful yachts and cabin cruisers. In and around Cala d’Or you will find several small swimming beaches. In the summer months these can be reasonably well populated. Then it is a good advice to take a bus to Es Trenc where you will find larger beaches.

West of Majorca and inland

Serra de Tramuntana [see picture first in the article] is called the eye-catching mountain range where Mallorca’s highest mountain, Puig Mayor (1445 m) is located. There are many who rightly claim that beautiful landscapes do not exist in the Balearic Islands. This may not be the place to stay for those who are just looking for beaches, but if you like quaint little towns where you still find it genuinely real, this is the area of ​​Majorca to look for.

In the west of Mallorca there are not many beaches. But the beach at Soller and the bay at Sa Colobra can be alternatives. The small “seaside resort” Port de Soller with its horseshoe shaped beach and cozy marina with outdoor restaurants and small shops we can safely recommend.

If you are looking for peace and quiet you will find yourself inland or Es Pla as the residents call this inner part of Mallorca. The terrain is hilly and the landscape is characterized by beautiful olive groves and almond trees. 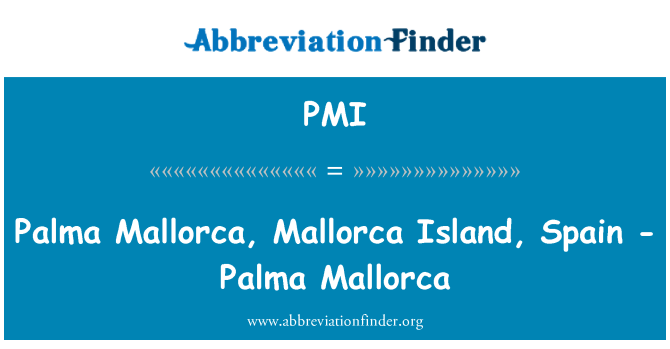 The most commonly used abbreviations about Mallorca is PMI which stands for Mallorca. In the following table, you can see all acronyms related to Mallorca, including abbreviations for airport, city, school, port, government, and etc.