Marseille is the oldest city in France, and has always been an exotic melting pot of different cultures. Marseille was the gateway between Southern Europe and North Africa, and the port is still important for the city’s existence.

Thousands of boats dip in the harbor, and fishermen sell crisp fresh produce at Marseille’s colorful fish market each morning. In the evening, the city is alive with numerous restaurants and bars, both in the Old Town and in the more fashionable districts in the south.

Although Marseille is the largest city in one of France’s most visited districts, Provence, it is oddly overlooked by tourists, who prefer to head to Nice, Cannes and Monaco. That Marseille is not particularly touristy, most of us just think it’s fine. But in return, it requires more of you as a visitor. Few people speak English, even in the tourist industry, except at the most exclusive hotels. Don’t expect to find menus in English, all subtitles at museums and sights are in French, and if you ask anyone about the road, be prepared to play the mime game for a while. In other words, if you don’t speak French, bring a guide book, a detailed city map and maybe a parlor.

But Marseille has three kilometers of beautiful beaches to offer, and a long and dramatic history that can fascinate anyone. Both singles, families and couples will have some brilliant days at any time of the year in France’s most diverse and unusual city – Marseille.

Get to know Marseille

Marseille is located on the Mediterranean coast of Provence in southern France, and was founded as a trading port 2600 years ago by Greeks from Phocaea. It was then renamed Massalia, and was later incorporated into the Roman Empire. Only in the 1480s, Marseille became part of France, but the population was constantly rebellious against the leaders of the capital. They enthusiastically supported the revolution and sent a large force to Paris in 1792 to fight the rebels. On arrival, they sang La Marseillaise, which is now France’s national anthem.

In 2007, Marseille has just over 800,000 inhabitants and is France’s second largest city. It is also the capital of the Provence-Alpes-Côte d’Azur region. Due to Marseille’s position as a port city, the ethnic French population has become a minority in its own city. The Italians make up as much as 37%, and every fourth inhabitant has roots in North Africa. Every eighth inhabitant comes from Armenia.

Marseille extends over a large area and is divided into fifteen district districts (districts), but most of the sights are in the four most central districts.

The natural point to orientate is the heart of the city, the old port, Vieux Port. Marseille is located on the coast to the west, and Vieux Port is a rectangular harbor that cuts inland, with thousands of fishing boats, cab cruisers and yachts moored to the many jetties. The harbor is about 500 meters long and 200 meters wide and is crossed by a ferry if you can’t walk around. The harbor promenades on both sides are flanked by eateries close in close, from cheap pizzerias to exclusive gourmet restaurants. The narrow neck leading into the Mediterranean is guarded by a fortress on each side: Fort Saint-Jean in the north and Bas Fort Saint-Nicolas in the south.

The streets of Marseille are constantly changing names, although they continue straight ahead, but you should note the street name La Canebière. This wide, lively avenue with tram line and several metro stations divides Marseille city center into two, from the beginning at the heart of the harbor and east to the Gothic cathedral Les Réformés. The western part is the shopping center, and several of the main shopping streets hit La Canebière here, such as Rue Paradis, the pedestrian street Rue Saint-Ferréol and Cours St.-Louis / Rue de Rome. Here is the Place du Général de Gaulle square with its old-fashioned carousel and fountain, and close by is the city’s opera and tourist information office. At the bottom of the harbor is also the fish market, where every morning the fishermen offer their sparkling fresh goods. Here is also the ferry terminal Gare Maritime.

If you continue east across La Canebière after changing its name to Boulevard de la Liberation, you will arrive at one of Marseille’s most beautiful buildings, the 160-year-old Palais de Longchamp, which has enormous sculptures, fountains and an associated parkland with museums, observatory and theater. Just north of La Canebière is the Gare Saint-Charles train station.

The area north of Vieux Port is Marseille’s oldest district, not to mention one of Europe’s oldest neighborhoods, Le Panier. But it is nowhere near as fashionable as old cities tend to be. 80% of the inhabitants are poor immigrants from North Africa, many of the farms are very dilapidated, and the garbage flows in the back streets. Here the laundry hangs to dry high above the streets as the music thunders out of the windows. But still, it’s a very pleasant area to stroll around, with its narrow cobblestone streets and low car traffic. Here you will find some of the city’s top tourist attractions, such as the Musee des Docks Romains and Cathédrale la Major.

In the view area outside the church of St. Laurent you have a great view towards Vieux Port, and when you look south to the other side of the harbor, you can not help noticing the city’s foremost symbol and tourist attraction, Notre-Dame de la Garde. 154 meters above sea level, this combined fortress / church overlooks Marseille, which since 200 years before Christ has been a pilgrimage destination and a lighthouse. The Roman-Byzantine-style church dates from the 1880s, and at the top is an 11-meter-high golden statue of the Virgin Mary with the Jesus child. From here you have a fantastic view of Marseille on all sides, and the place is magical at sunset.

Below Notre Dame, along the south side of Vieux Port, you will also find several interesting buildings. From the Pharaoh Palace at the far end, via the fortress of Saint-Nicholas and Marseille’s oldest church, Abbaye Saint-Victor, to the Opera at the bottom of the harbor’s southeast corner, the stretch is full of history. Join us in the cozy square of Place Thiars, which is now filled with hotels and restaurants.

Another street worth visiting is the several kilometer long Avenue du Prado, which continues south from the end of Rue de Rome at the Castellane traffic junction. This street turns abruptly westwards towards the beaches, and at this turn you will find Marseille’s large football stadium, called Stade Vélodrome. It seats over 60,000 spectators and was used for matches during the 1998 World Cup.

Avenue du Prado ends at Place David, which has a large copy of Michelangelo’s David statue. Below are Marseille’s beaches, and from the sandy beach of Plage du Prophète to the beautiful pebble beach of Anse de la Pointe Rouge, there are well-maintained hiking trails. Windsurfers have their paradise here, there are volleyball courts, restaurants and helpful guards. Here is also the large Borély Park, where you will find Marseille’s racetrack, a golf course, a 17th century manor house and a small lake with swans where you can rent a rowing boat. 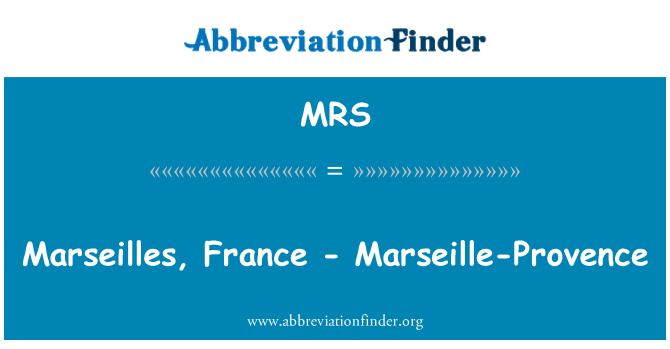 The most commonly used abbreviations about Marseille is MRS which stands for Marseille. In the following table, you can see all acronyms related to Marseille, including abbreviations for airport, city, school, port, government, and etc.