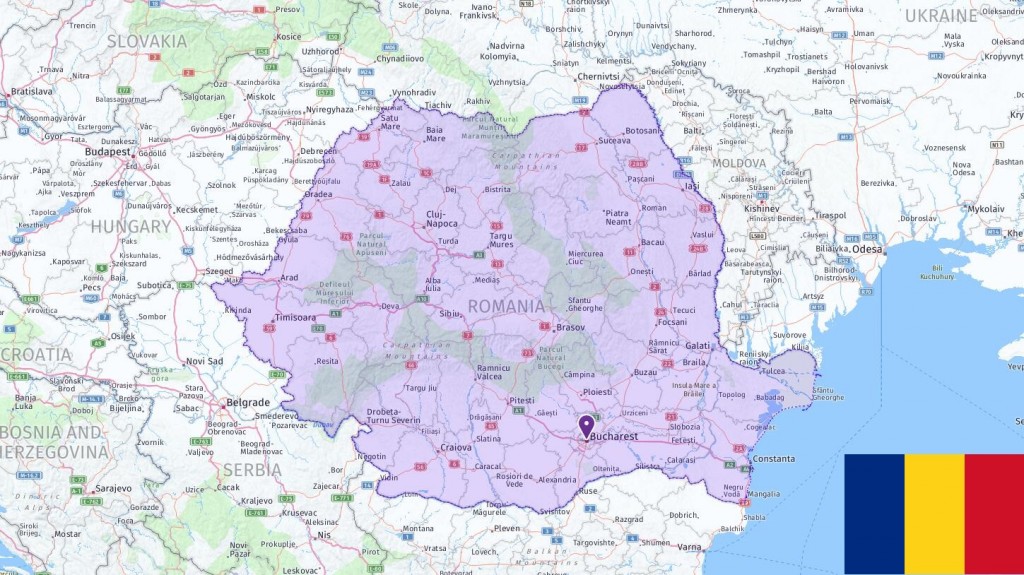 The most commonly used abbreviations about Romania are RO which stands for Romania and RON which means Romanian Leu (Romania currency). In the following table, you can see all acronyms related to Romania, including abbreviations for airport, city, school, port, government, and etc. 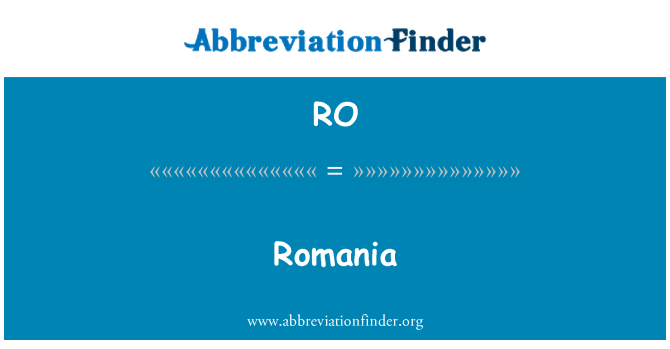 In the middle of Romania is the large Carpathian mountain range, with 14 peaks over 2000 meters. The high mountains extend into lower hills further south, and to the west and southeast are elongated plains. Almost half of the land area is pristine ecosystems, making Romania one of Europe’s best-preserved species diversity. The country has large protected forest areas that have been re-planted after being cut down during the communist era. In the southeast, it is typical Mediterranean climate, with mild winters and summers. Further north there is a domestic climate with icy winters and very hot summers. The climate also varies in part between the landscape areas due to different elevations above sea level.

Romania was heavily contaminated during the communist era, when primitive heavy industry destroyed large lands. Much of the earth is destroyed by acid rain. Radioactive waste following the accident at the Chernobyl nuclear plant in neighboring Ukraine in 1986 has also damaged large areas. In recent decades, environmental protection efforts have accelerated in the country, and increasingly large areas are being made into nature reserves. In addition, emissions control has improved since the country joined the EU in 2007.

Today’s Romania was incorporated as a province in the Roman Empire around the year 200 AD. The Roman Empire’s long decline began in the 300s, and Romania was plundered by various nomadic peoples. The area lay under a number of neighboring countries for hundreds of years, and lacked a central power, until the two principalities of Vallakia and Moldavia were founded in the 1300s. In the 15th century, the territories were incorporated into the Ottoman Empire, which ruled until the late 1700s. Then the Ottomans withdrew from the country after pressure from Austria-Hungary and Russia. The Russians annexed the country as a protectorate, but lost control after the Crimean War (1853-1856).

In 1881, Romania declared itself an independent kingdom under King Carol. The country wanted to be neutral during World War I and World War II, but was forced on the Allies’ side in World War I, and on Germany’s side in World War II. After World War II, the Communists came to power and abolished the monarchy. In the period 1965-1989 Romania was ruled by dictator Nicolae Ceaucescu. He was deposed in a bloody revolution in 1989.

Romania was granted a new constitution and became a republic after the revolution in 1989. The country is jointly governed by the president and the prime minister. The president has a lot of power. He/she appoints the prime minister and can dissolve parliament. Since the revolution, a rich diversity of political parties has emerged, without this having led to the formation of whistles or clear political divides. Extensive reforms were undertaken in the early 2000s to qualify for membership of the European Union (EU). Many critics believe that these reforms were abandoned when the country joined in 2007.

In recent years there have been many political conflicts. There have been major demonstrations against the economic austerity, which got even worse after the financial crisis in 2009. There has also been a power struggle between the president and the prime minister. Corruption has been an important issue in recent years. The government has tried to change the laws to make it more difficult to be convicted of corruption, which has faced strong criticism from the EU and massive demonstrations.

Several human rights organizations criticize Romania for treating minorities in the country. The Roma are particularly vulnerable, many lack identity papers and therefore do not have access to welfare services. Romania also has problems with discrimination and violence against women, many homeless children and human trafficking.

Romania has good conditions for economic growth, because it has fertile soil, good access to energy and several different industries. Yet the country remains one of Europe’s poorest. The transition from the mismanaged economy during the dictatorship to market economics was tough. Inflation and failed reforms characterized much of the 1990s. A reform agreement with the Monetary Fund (IMF) led to major cuts in pensions and that one in four public employees lost their jobs. However, the reforms and increased privatization made Romania more attractive to foreign investment, and several foreign banks established themselves in the country.

Romania was hit hard by the financial crisis in 2009 and had to raise foreign crisis loans. The conditions for the loans were that Romania had to gain control of the budget deficits and led to unpopular austerity. The already poor economic situation caused the country to be severely hit by the euro crisis in the early 2010s. From 2013, the economy began to grow again due to increased exports. Romanian purchasing power has increased, and today the country has one of the fastest growing economies in the EU. Corruption and economic crime, however, hamper economic development, as do poor infrastructure and a low level of education.