Sofia, together with several independent suburbs, forms the urban region of Sofia City (1,349 km 2) and is also the administrative seat of the Sofia area (7 064 km 2), the economically strongest region in Bulgaria. The city is the seat of the Bulgarian Orthodox Patriarch and the Catholic Exarch, as well as the Bulgarian Academy of Sciences (founded in 1869). It has a university (since 1909; founded as a college in 1888), technical university (founded in 1945), private New Bulgarian University, medical university, numerous other universities (including for music, sports, economics, architecture and construction, visual arts, theater, Forestry, chemistry, mining and geology), several scientific institutes, astronomical observatory, national library, museum, etc. Museums, National Gallery, Philharmonic, State Opera and others Theatre; zoological and botanical garden; Goethe Institute.

The city, which is surrounded by a ring road, is also an important national and international hub in the rail and road network. The international airport is located in the east of the city and is the largest in the country. A subway has been relieving inner-city traffic since 1998; several cable cars lead into the Vitosha. Spa baths were built at four thermal springs in the urban area; There are other health resorts in the vicinity.

The oldest preserved buildings include – in addition to the remains of the Roman city wall (2nd – 5th centuries, including the east gate) – the St. George’s Rotunda (4th, 6th and 10th centuries, frescoes from the 10th, 12th, 13th and 14th centuries). Century) and the Sophienkirche (according to recent research probably not before the middle of the 9th century, badly destroyed by earthquakes in the 19th century, later renewed several times); both churches were mosques in Ottoman times. The Bulgarian Orthodox Church (10th-13th centuries) in the suburb of Bojana has been a UNESCO World Heritage Site since 1979.

After the Second World War, the city center was redesigned and large residential areas were created in the peripheral zones. The new buildings include the Bojana government residence, the Palace of Culture (1978–81), the main train station (1979) and the »Witoscha« hotel (1979, by K. Kurokawa). In the 1990s, there was strong growth on the periphery (suburbanization), with new, primarily upscale housing developments emerging here (especially at the foot of the Vitosha Mountains).

Since the 4th millennium BC Constantly populated place in the 8th / 7th centuries. Century BC Belonged to the Thracian Empire, fell in 29 BC. As Serdica (after the Thracian Serds) to Rome and became capital of the province of Dacia mediterranea under Aurelian. In 342 a council took place here, at which it was tried in vain to reach an agreement with the Arians. Between 441 and 447 the Huns ravaged the city; it was rebuilt under Emperor Justinian I, conquered by the Bulgarian Khan Krumin 809, Slavicized and moved to Sredez renamed. As a border fortress from 1018–1185 under Byzantine rule, the city developed into one of the most important in Bulgaria. It took its name from the Church of St. Sophia (Bulgarian Sweta Sofija), the main church in the city. From 1382–1878 Sofia belonged to the Ottoman Empire and has been the capital of Bulgaria ever since. 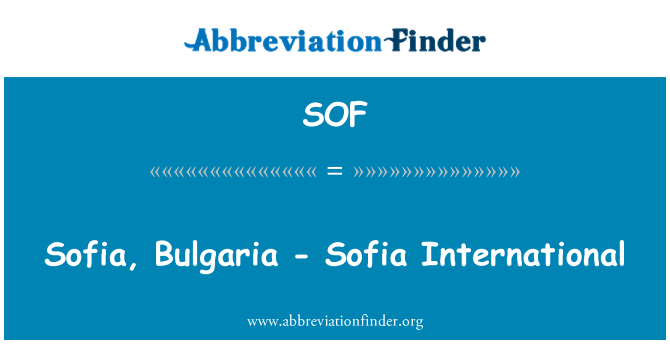