The most commonly used abbreviations about Syria are SY which stands for Syria and SYP which means Syrian pound (Syria currency). In the following table, you can see all acronyms related to Syria, including abbreviations for airport, city, school, port, government, and etc. 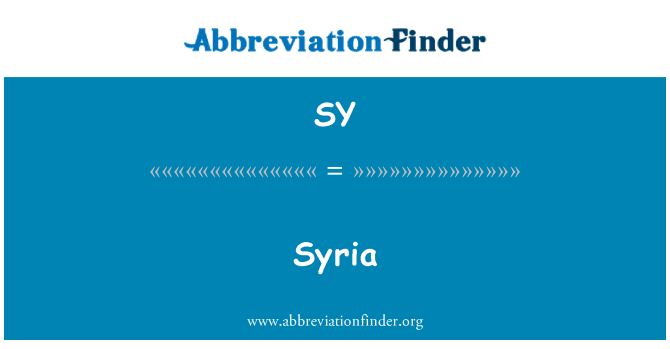 Large parts of Syria are mountains and plains, with desert in the east and the lush Mediterranean coast in the west. In the middle of the country is the plain and mountain landscape, between the humid coastal climate and the semi-arid desert areas.

Due to low rainfall in the plains, the authorities have initiated a major irrigation project to improve the quality and increase the proportion of agricultural land. Sewage discharges and pollution from the oil and industrial sector, and in recent times also war and conflict, have led to scarcity of clean water. Lack of rainfall has also caused problems such as deforestation, overgrazing, soil erosion and desertification.

In ancient times, Syria was a major year for trade between Egypt, Asia Minor and Babylonia, as well as for migrations and war trains. The territory was part of the Turkish-controlled Ottoman Empire from 1516 until the end of the First World War. In 1920 Syria became the French protectorate (a type of colony) and first gained its independence in 1946. During the Six Day War in 1967, Syria lost the Golan Heights to neighboring Israel. Syria failed to take back the territories in 1973, and relations between the countries have since been tense. This constant state of war has legitimized Syria’s strict dictatorship.

Between independence and 1963, the country experienced 16 military coups and eight years of parliamentary rule before the pan-Arab, socialist Baath party took power in a bloodless coup. Hafez al-Assad eventually took all control and made the one-party state a one-man regime. When Hafez al-Assad died in 2000, his son Bashar al-Assad took over the presidency.

In 1976, Syria became involved in the Lebanese civil war. Only in 2005 did Syria withdraw its troops from the country following pressure from the international community and the Lebanese opposition.

Although Syria is formally a parliamentary republic, the regime is in fact a very repressive dictatorship, with close ties to the military and the security police. The power is mainly concentrated with the president. During Bashar al-Assad, Syria, right up to the Arab Spring, has been the Middle East’s most repressive military dictatorship. Opposition in the country is suppressed and the press is under state control.

In March 2011, the Arab Spring reached Syria, and fierce demonstrations against President Bashar al-Assad’s dictatorship ignited. The president rescinded the state of emergency that had existed since 1963 and promised political reforms, but this was not enough; the rebels demanded Assad’s departure. At the same time, the regime struck down hard on the uprising, and the situation developed into a civil war.

The Assad regime has a large weapons arsenal and had one of the world’s strongest military forces in 2011. Still, the regime lost control of large parts of the country, and since 2011 the country has been in a brutal civil war. Several thousand different rebel groups competed for land. The Islamic State (IS) terrorist group controlled large parts of Syria and neighboring Iraq for a few years, but lost almost all of its territory in 2017. Human rights organizations and the UN have investigated and condemned both the Assad regime and rebel forces’ use of torture, weapons of mass destruction and violence against the people of war. However, the UN Security Council has been paralyzed as various international interests and parties have been strong.

Syria’s economy and trade are mainly based on agriculture, industry and oil. Oil is the country’s most important source of income. In the past, Syria mainly imported raw materials from other countries, but in recent times, due to the government’s increased efforts in the agricultural sector, Syria produces and exports its own agricultural products such as cotton, fruits and vegetables. At the same time, agriculture has been threatened by drought and neglect, so in 2009 the state had to import wheat for the first time in 20 years.

Before the civil war, in 2009, 30% of Syria’s population was considered poor and unemployment was 25%.

Large parts of Syria’s business activities, including oil production, are owned and controlled by the state. In 1991, Hafez al-Assad sought to liberalize the economy without privatizing state-owned firms. Only Arab countries invested in Syria, while the West was critical of both the economy and the politics of the country. His son Bashar went much further with economic reforms in the 21st century; The result was that the same power elite ended up as private owners of companies, instead of state owners.

The civil war has resulted in enormous financial losses, partly due to international sanctions, refugee flows out of the country, and the violent devastation caused by bombs.