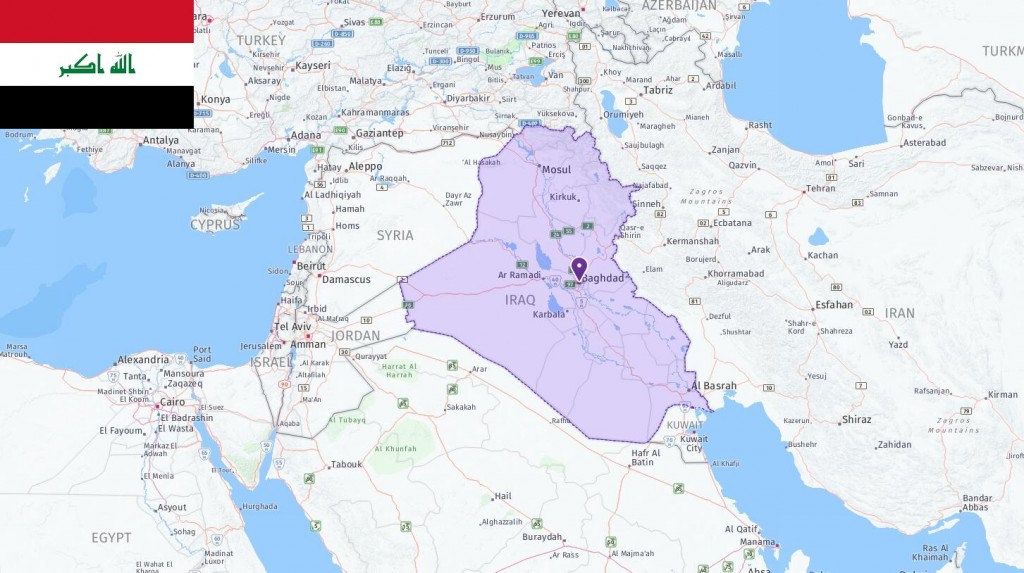 The most commonly used abbreviations about Iraq are IQ which stands for Iraq and IQD which means Iraqi dinar (Iraq currency). In the following table, you can see all acronyms related to Iraq, including abbreviations for airport, city, school, port, government, and etc. 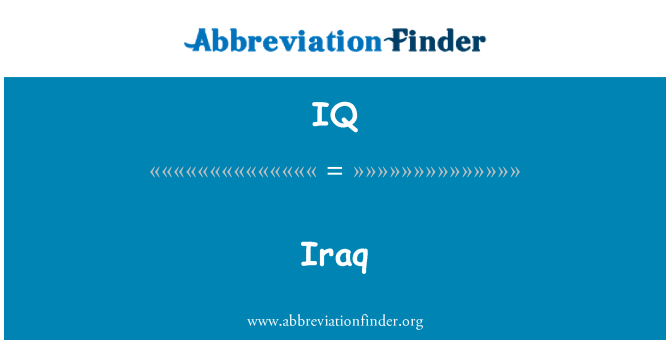 Through Iraq, which is slightly larger than Norway, the large rivers Euphrates and Tigris flow. The area was formerly called Mesopotamia – the land between the rivers. The river plains are fertile and most of the Iraqi population lives in this area. In the northeast, on the border with Turkey and Iran, lies the mountainous part of the country, called the Zagros Mountains. This is where Iraq’s oil is. More than half of the country’s southeastern areas are desert. Iraq has a short coastline, just two miles long, in the Persian Gulf.

The climate is dry. Drought in the summer and little rain in the winter is typical. In the mountainous regions northeast of the country there may be snow in winter, but otherwise the average temperature is 35 degrees in the middle of summer.

Lack of water is a huge problem in Iraq. The authorities have tried to solve this by demining areas, but it has resulted in drying out of marsh areas and smaller rivers. The damage of this has caused a shortage of drinking water, extinction of animal species, salting of the soil, erosion and deterioration.

From over 5,000 years before our time, Iraq has been the core of history’s first civilizations and a number of empires, such as Sumer, Babylonia and Assyria. In 1258 the country was occupied and destroyed by the Mongols, and from 1534 it was subject to the Ottoman Empire. Iraq as a state was first formed when Britain took control of the area after the First World War. The country was created through a merger of three provinces from the Ottoman Empire – Basra, Baghdad and Mosul. Iraq first became independent in 1932.

Until the Arab Nationalist Baath Party took power in 1968, the country went through a turbulent period with several coups. In 1979, Saddam Hussein took over the leadership of the Baath Party, became the country’s dictator, and led the country to war with Iran in the period 1980-1988. In 1990, Iraq attempted to annex Kuwait, but was chased back by a US-led military operation. As a result, the Kurdish minority in northern Iraq gained considerable autonomy, after suffering extreme repression in the previous years.

In 2003, the Saddam Hussein regime was overthrown as a result of a US-led invasion of the country. This led to a rebellion against the US occupation forces and the new regime. Sunni Muslims were marginalized by the new Shiite-dominated regime, which contributed to the flourishing of Sunni Islamist extremism and the establishment of the Islamic State (IS) in 2014.

In early 2005, the first free elections of 50 years were held in Iraq. The Shiite and Kurdish parties won the majority of votes. The Sunni Muslims who formerly sat with all the power lost much of their political influence. Despite the new government being deployed, the country has been characterized by war and terror.

Before the war against Iran in 1980, Iraq had one of the best welfare systems in the Middle East. The Iraqi invasion of Kuwait led to international sanctions against the country, which hit the population hard. Because of war and unrest since 2003, living conditions are difficult today. Corruption is widespread, and there is a lack of basic services such as water and electricity.

Iraq is one of the most populous of the Arab states, and more ethnically and culturally composed than other countries in the region. The Kurds make up up to a quarter of the population and have autonomy in northern Iraq. The Arabs are divided between Sunnis and Shias, where the Shias constitute a majority of ca. 60-65 percent.

In recent years there has been an increase in the number of people fleeing Iraq. Of the more than 5.8 million Iraqis who have fled their homes since 2014, more than two million are still on the run, according to the Refugee Council (2018).

Iraq is resourceful with the world’s second-largest oil and gas deposits – and is therefore of great strategic importance.

Iraq was traditionally an agricultural community, but today it is dependent on food imports. Since the 1950s, the country’s economy has been largely dominated by the oil sector, which has traditionally accounted for 95 per cent of export earnings. However, all the years of war and economic sanctions have drastically reduced Iraq’s economic activities. Direct attacks on, and destruction of, oil pipelines and infrastructure have put the country far back. Iraq has also incurred a large foreign debt and is dependent on assistance.