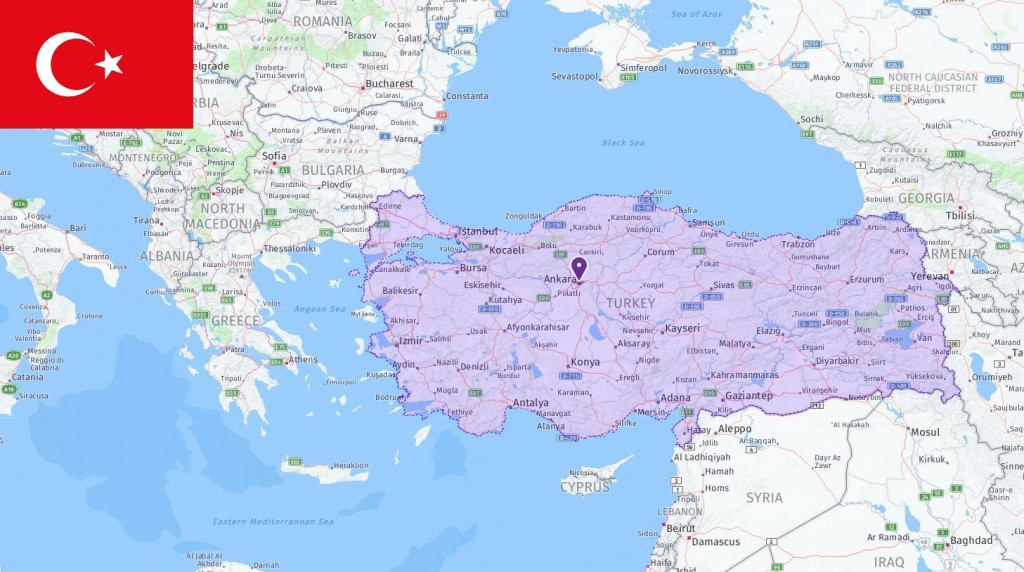 The most commonly used abbreviations about Turkey are TR which stands for Turkey and TRY which means Turkish lira (Turkey currency). In the following table, you can see all acronyms related to Turkey, including abbreviations for airport, city, school, port, government, and etc. 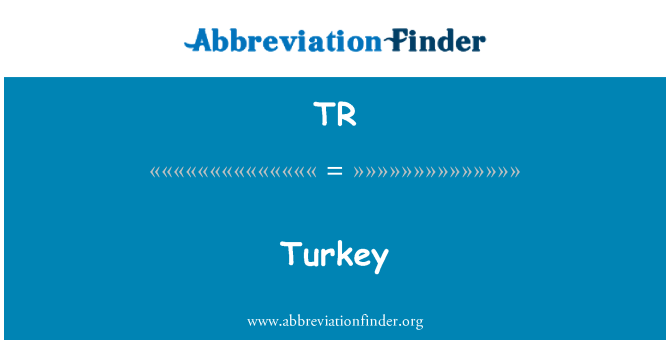 In the south and north, Turkey has an elongated coast towards the Mediterranean and the Black Sea, which are popular destinations for tourists from all over Europe. In the east, steep mountain ranges form natural borders against neighboring Iraq and Iran. Mountain areas also dominate most of the inland, where the average height is 1000 meters above sea level. In the western parts of the country, the landscape consists of low lying plains which are ideal for farming.

Turkey lies between several tectonic plates. This has led to frequent earthquakes, often with disastrous consequences. The climate is very varied, with temperate Mediterranean climate in the southwest and cold domestic climate in the mountainous areas in the northeast. Turkey faces major environmental problems. Soil erosion has damaged more than half of the arable land in the country, and urban air pollution has increased dramatically in recent years. Poor government control has also led many companies to release toxic chemicals freely in the rivers.

Today’s Turkey is the last rest of the Ottoman Empire, which in the years 1300-1550 was one of the world’s most powerful empires. The Empire was founded after the Mongols expelled most of the Muslims of today’s Iran and Iraq into Turkey, where they gathered under Osman I.. In the 19th century, the empire entered a long decline, losing more and more areas. After participating in the losing side of World War I (1914-1918), the empire collapsed.

In 1924, the remains were converted to the Turkish Republic, founded by Mustafa Kemal, who was called Atatürk: “the father of the Turks”. All traces of a religious state were removed, and the distinction was enshrined in the new constitution. Atatürk died in 1938, but the party he founded remained in power until 1950. Then the Democratic Party (DP) came to power. The next three decades were marked by political turmoil, and the military intervened and ousted the governments in 1960, 1971 and 1980, for various reasons. From 1984-1999 there was full war between the Turkish military and the guerrilla army of the Kurdish people, PKK. The PKK wants to disassociate from Turkey and form an independent, Kurdish state.

Turkey has become less democratic over several years. Increasing dissatisfaction with President Erdogan’s authoritarian rule led parts of the Turkish military to conduct a coup d’état in July 2016. The coup attempt was quickly defeated, opening an opportunity for Erdogan to declare his state of emergency and arrest those he perceived as enemies: soldiers, journalists and political competitors. After that, the country was no longer democratic.

Turkey is a socially divided country, with huge differences in educational and income levels between the urban population in the west and the smaller villages in the east. The Kurdish minority in the east make up almost 20 percent of the population, and have been discriminated against for decades.

Turkey has become a party to the conflict in Syria. In this context, the fight against the PKK and the Kurds has intensified. Over two million Syrians have fled to Turkey, which has long worked to join the EU. As a result of the influx of refugees into Europe, the EU and Turkey have signed an agreement. It means, among other things, that Turkey should limit the number of refugees moving on from Turkey to Europe, against the resumption of talks on Turkish EU membership.

A fundamental part of Atatürk’s ideology, the founder of modern Turkey, was that the state should control most of the economy. During the 1980s, partial privatization of the state-owned companies began, but the state is still an important economic player in the country. Privatization was not followed by proper regulation, which has led to widespread corruption in the country, and some estimates suggest that the black economy may account for as much as 50 percent of the country’s gross domestic product (GDP).

In recent years, mass production of cars and electronics has taken over ever larger parts of the economy, while agriculture has declined. However, the country is still one of the world’s largest agricultural producers and is self-sufficient in food. Turkey has enjoyed stable economic growth throughout the 2000s, with the exception of the downturn that followed the international financial crisis in 2009.