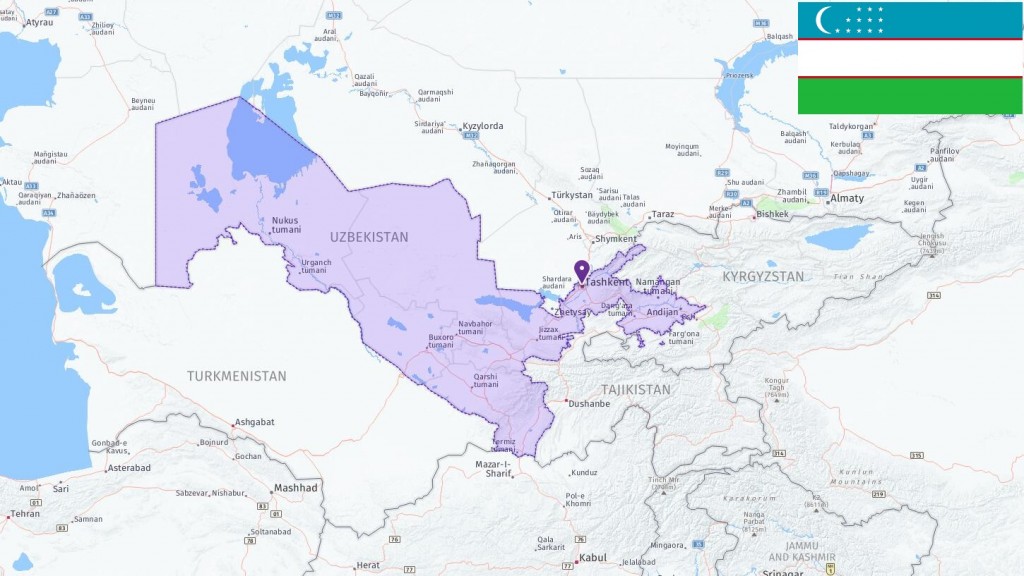 The most commonly used abbreviations about Uzbekistan are UZ which stands for Uzbekistan and UZS which means Uzbek som (Uzbekistan currency). In the following table, you can see all acronyms related to Uzbekistan, including abbreviations for airport, city, school, port, government, and etc. 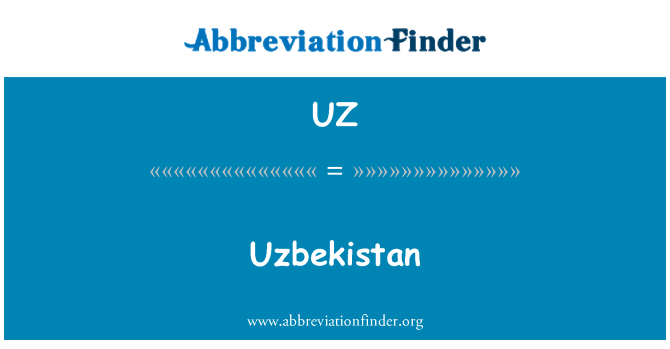 Around four-fifths of Uzbekistan consists of a flat and dry lowland area. To the south, the landscape is characterized by desert, and to the west lies a golden plateau. To the east, the landscape is characterized by more hilly terrain, and lush nature. Towards the border with Kyrgyzstan and Tajikistan in the east, the landscape is dominated by the mountain range Tian Shan, with the country’s highest peak Khazret Sultan at 4643 m asl. Several large rivers flow from the highlands in the southeast through the country to the northwest. In the north, on the border with Kazakhstan, lies the Aral Sea. The climate is continental and dry with long hot summers and short cold winters. Most of the rainfall comes in winter and spring.

Uzbekistan has several major environmental problems. The country’s large rivers have been drained of water for use in large irrigation systems in agriculture. The bottling of the rivers has almost dried up the Aral Sea. Until the 1990s, the sea was the world’s fourth largest lake, while today it is in danger of disappearing completely. Extensive use of fertilizers in agriculture has also led to contamination of groundwater, rivers and lakes. Emissions from heavy industry have further led to pollution of the air and the earth.

The area that today makes up Uzbekistan was populated by nomadic peoples of prehistoric times. The first known kingdom in the area was the Saka Dynasty, which ruled the whole of Central Asia around 800 BCE. The regionhas a long history of being controlled, occupied and conquered by a variety of realms and people. In 329 BCE. the area was conquered by Alexander the Great and introduced into the Hellenistic world. Throughout the 100s, the area was important for the passage of people and goods on the trade route between Europe and China, also known as the Silk Road. From the 6th century, the Arabs took control of the whole of Central Asia, bringing Islam to the region. Genghis Khan occupied the area in the 13th century, before Turkish conquerors established a powerful empire in present-day Uzbekistan in the 13th century. Throughout the 19th century, the entire Central Asian region came under Russian control.

As a result of the Russian revolutions in 1917, conflict broke out between Uzbek nationalists and the Russian Bolsheviks. The nationalist movement was brutally defeated, and in 1924 the Soviet sub-republic of Uzbekistan was created. When the Soviet Union collapsed in 1991, Uzbekistan for the first time became an independent state.

Uzbekistan is a republic where the president has a lot of power. The president is the country’s head of state, the commander-in-chief of the military and represents the executive. The president is elected for five years at a time, but the elections are not democratic. The legislative power lies formally with Parliament, which in practice is responsible to the President. The country’s prime minister and government are also elected by the president. The authoritarian policies in the country have contributed to stability, but are strongly criticized internationally for serious violations of human rights. Thousands are imprisoned for criticism of the regime, and the regime is accused of religious, political and ethnic persecution of the population.

Since independence in 1991, several of the country’s borders are still unclear. On several occasions, border disputes have led to unrest among Central Asian countries. In rural areas, poor sanitation and waste management lead to the rapid spread of diseases. The health system and infrastructure are also poorly developed in the countryside. In cities, more than 50 percent of the population lives in slums. Old norms and traditions mean that women and sexual minorities have weak positions in society. In the labor market, women very rarely hold high positions. Homosexuality between but can be punishable by up to three years in prison.

Uzbekistan’s economic foundations and business are inherited from the Soviet Union. State corporations dominate the economy, and state planning and market interference is common. During the Soviet era, the country’s economic base was based on government subsidized cotton production. When the Soviet Union collapsed and the subsidies ended, the country’s economy collapsed. Cotton is still an important industry in the country, but water shortages and old irrigation facilities make the industry unsustainable. The industry is often criticized internationally for engaging in forced labor and child labor. In addition to cotton, jute, wheat, fruits and vegetables are grown. However, the state controls what is grown and at what price the goods are to be sold. Since the 1990s, exports of natural gas and oil have become significant industries for the country. Uzbekistan is also among the world’s largest producers of gold and uranium.

Despite major mineral deposits and other natural resources, Uzbekistan is struggling with widespread poverty. Over 60 percent of the population lives in absolute poverty, and the country’s economy is entirely dependent on international aid. The country is also ranked as one of the world’s most corrupt, making it difficult to attract foreign investment.