Valencia is a beautiful old town located on the Spanish Mediterranean coast. Although Valencia is the third largest city in Spain, it has for years been overlooked by tourists who have instead chosen the capital Madrid, big brother Barcelona in the north or the Costa del Sol coast in the south.

But now this is changing, and Spanish visitors have discovered Valencia’s wide range of attractions.

The annual Fallas festival in March is the big event and attracts more and more visitors to Valencia.

The first impression of residential blocks and suburban industry may not be the whole world, but the city’s Centro Historico, that is, the Old Town, is grand. In addition, you are close to some of Spain’s most beautiful beaches. A few miles south of Valencia you have a short distance to the Costa Blanca coast. Or you can take a boat to holiday islands like Ibiza or Mallorca.

Valencia has a typical Mediterranean climate with mild winters and very hot dry summers, and the city can easily be visited year-round.

Maybe Valencia will take over the throne as our favorite destination in Spain?

Get to know Valencia

Valencia was founded by the Romans around 135 BC and has since been occupied by both Moors, Aragonese and Englishmen, in addition to being an independent kingdom. Today, Valencia has grown to become the third largest city in Spain with around 800,000 inhabitants (official figures in 2007). Valencia is also the capital of the Spanish region of the same name.

Valencia is based around the Turia River, and although Valencia is a coastal town, the nearest beach is a good distance from the city center. The beaches, on the other hand, are incredibly beautiful.

One of the best pretext for visiting Valencia is the annual Fallas Festival, a five-day street party with free concerts and dance performances, bullfights, fireworks, costume shows and markets. Everything is centered around hundreds of huge, decorative and often satirical characters, which are placed on streets and squares throughout the city.

At the end of the festival they go up in flames to great cheers for the spectators. Most of the over two million visitors to Valencia during the festival are Spaniards, but this Spanish secret is now becoming known to foreigners as well. The Fallas Festival takes place in mid-March each year.

The Valencia region is bilingual, and much of the signage and information is in both Spanish and Valentinian. The big difference, though, is not, and there are few language problems between the two language groups, which can be compared to Bokmål and New Norwegian. A letter difference here and a different ending there, but if you understand a little Spanish, you will also understand a little Valentinian. ( Platja instead of playa / beach, avinguda instead of avenida / gate and ciutat instead of ciudad / city.)

Valencia’s people are among Spain’s friendliest, and they like to talk, in sign language if necessary, and go a long way to help a tourist in need. Usually only the young people speak English.

Originally the river Turia ran through the center of Valencia. The river is now led away from the original river course. The old river course is now a long park area, Jardines del Turia, where several of the city’s main attractions are located.

Most tourists will settle in and around Valencia city center. The oldest district, Barrio del Carmen is located in the northern center. Barrio del Carmen is halfway circled by Jardines del Turia. The district is bounded on the northeast and southeast by the two old towers that guarded the old city gates; Torres Serranos and Torres Quart. The rest of the city walls are long gone, but you can enter the Serrano tower where the flag of Valencia always flies from the pole at the top.

Barrio del Carmen is Valencia’s premier nightlife area, well helped by the many students from Valencia’s four universities. Here it is teeming with cervezerias, eateries, bars and clubs that keep going until the sun rises. If you do not intend to attend, you may want to find another district to spend the night in.

Just south of the Serrano tower and at the back of Valencia’s magnificent cathedral is the Plaza de la Virgen. This was once the forum of ancient Roman Valencia. From here, the street Calle Caballeros goes west to the Quart Tower, marking the southern border of Barrio del Carmen. In the middle of the Plaza de la Virgen lies a beautiful fountain which symbolizes the Turia river, and on the west side of the square lies the administrative building of the Valencian region. Valencia, by the way, has much more autonomy than other Spanish regions.

Valencia’s cathedral, begun in the 13th century, houses the cup that is recognized by the Vatican as the very Holy Grail that Jesus drank of in his last meal. In front of the cathedral lies the large square Plaza de la Reina (Queen’s Square), with stalls selling pottery. There are also several outdoor restaurants, but the square is otherwise marred by a car park and bus stop, where sightseeing buses also stop.

A few hundred meters south of Plaza de la Reina, the even larger Plaza del Ayuntamiento square lies in front of Valencia’s neoclassical town hall. Also, take the opportunity to pop into the post office with the nicest expedition hall you’ve ever seen. The post office is located opposite the town hall on the other side of the square.

A few hundred meters further south, Valencia’s northern railway station (Estación del Norte) is right next to the huge Plaza del Toros, the city’s bullfighting arena. Right next to this one again you will find the Bullring Museum (Museo Taurino) situated in a passage.

Valencia is Spain’s third largest city and capital of the region of the same name (Valencia). The city is also the 3rd largest port city in Spain. The name Valencia has been named after the Emperor Valens. 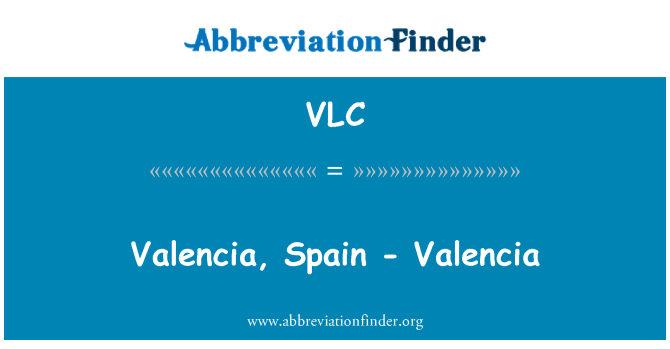 The most commonly used abbreviations about Valencia is VLC which stands for Valencia. In the following table, you can see all acronyms related to Valencia, including abbreviations for airport, city, school, port, government, and etc.