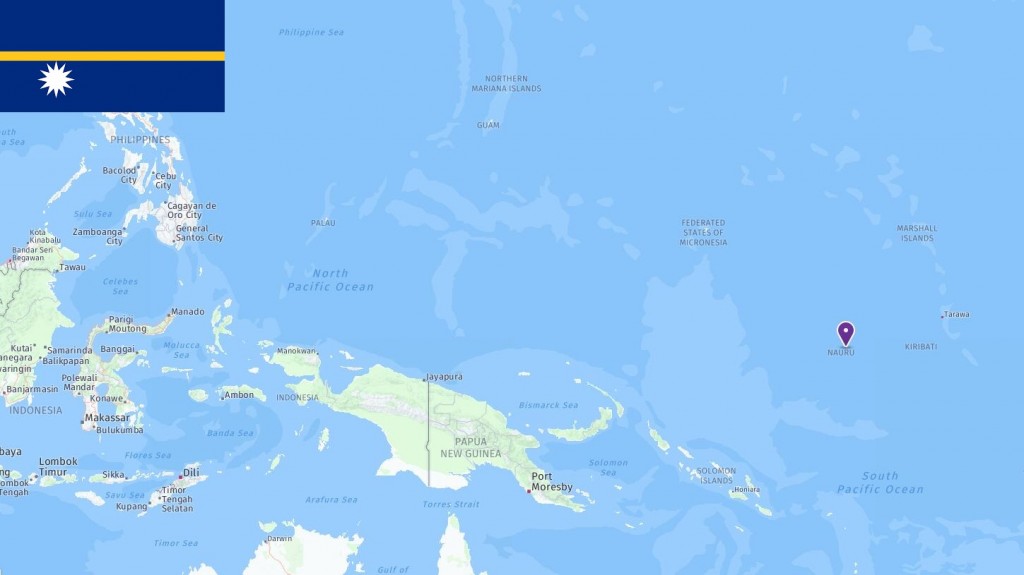 The most commonly used abbreviations about Nauru are NR which stands for Nauru and AUD which means Australian dollar (Nauru currency). In the following table, you can see all acronyms related to Nauru, including abbreviations for airport, city, school, port, government, and etc. 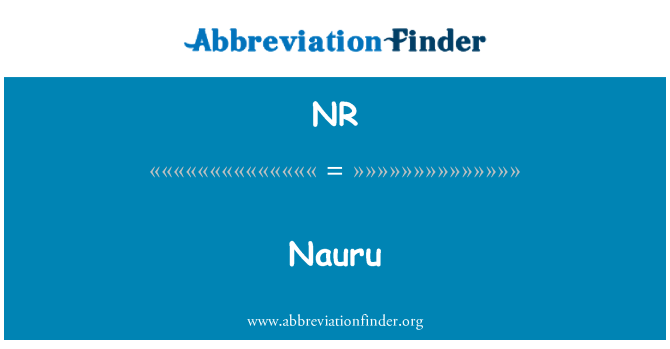 Nauru is a coral island in the Pacific just south of the equator. The island consists of an altitude plateau of around 60 meters above sea level. bordered by a fertile low lying belt along the coast. Nauru was originally a coral atoll with a large lagoon in the middle. After thousands of years, predominantly bird eczema (bird poop) has filled in the lagoon, making it today look like a mountain in the middle of the island. The lowlands that surround the altitude plateau are relatively fertile with forests and tropical plants. The climate on the island is tropical humid and warm all year round. From November to February, monsoon winds from the west often blow, bringing with them most of the annual rainfall. During this period, large tropical cyclones may occur.

After over a hundred years of mining on the altitude plateau, the nature of four-fifths of the island has been destroyed. The altitude plateau today is almost completely bare for trees and plants. In the long run, it is feared that sea level rise and climate change will cause floods and devastation in the lowlands where most of the population lives. The country also has very limited freshwater bodies. If the rainfall is absent, the land can run out of drinking water.

Nauru was populated by Polynesian and Micronesian seamen at least 3,000 years ago. When the island was discovered by Europeans in 1778, the population was divided into 12 different chief clans. As the Europeans brought alcohol and firearms, civil war broke out between the various clans. In the ten years the war lasted (1878-1888), about 500 of the island’s 1400 inhabitants died. In 1888 the island was annexed by Germany, which started the extraction of phosphate from the altitude plateau. During the First World War, the island was occupied by Australia, and until the Second World War, Australia, New Zealand and the United Kingdom shared responsibility for the island. After being occupied by Japan during World War II, the island was again administered by Australia from 1947. In 1968, the island gained independence under the name Nauru.

In the 1970s, Nauru became one of the world’s most prosperous countries due to the extraction and export of phosphate. However, many years of poor financial management and almost empty phosphate mines led to a deep economic crisis in the 1990s. To prevent the country from going bankrupt, Nauru agreed to several financial agreements with Australia in the early 2000s.

Since the economic downturn in the 1990s, when phosphate deposits came to an end, Nauru policy has been unstable. The most important political issue has been the uncertainty surrounding the country’s ability to manage in the future. Without the income from the mining industry, the country has few other industries to develop. In order to avoid total economic collapse, Nauru signed an agreement with Australia in 2001. Nauru then agreed that refugees on their way to Australia could stay on the island, against Australia paying several million dollars in aid. The agreement, which is still in force today, has been heavily criticized by the UN and Amnesty for violating the human rights of asylum seekers. In particular, Nauru (and Australia sending its asylum seekers there) has been criticized for failing to safeguard the legal security, health services, living conditions and quality of life of the asylum seekers.

Since the worst crisis years of the 1990s, Naurus’ economy has recovered somewhat. The country has made several major economic changes, and has worked closely with other countries and the International Monetary Fund to make the economy sustainable. After new investigations of the altitude plateau, other types of phosphate were discovered that could be exported. New export earnings, Australian aid and sales of fishing licenses to other countries have led to economic growth in recent years. The country is still burdened by large foreign debt, but the new economic policy offers hope for the future.

Only one of Nauru’s total area of ​​21 square kilometers is suitable for agriculture, and the island has no fresh water sources. The country must therefore import almost all food and drinking water from abroad. This has created a large trade deficit (they import more than they export). Despite the country’s major financial problems, the citizens pay almost no tax. In addition, the population has free health care, old age pension, child allowance and unemployment benefits.