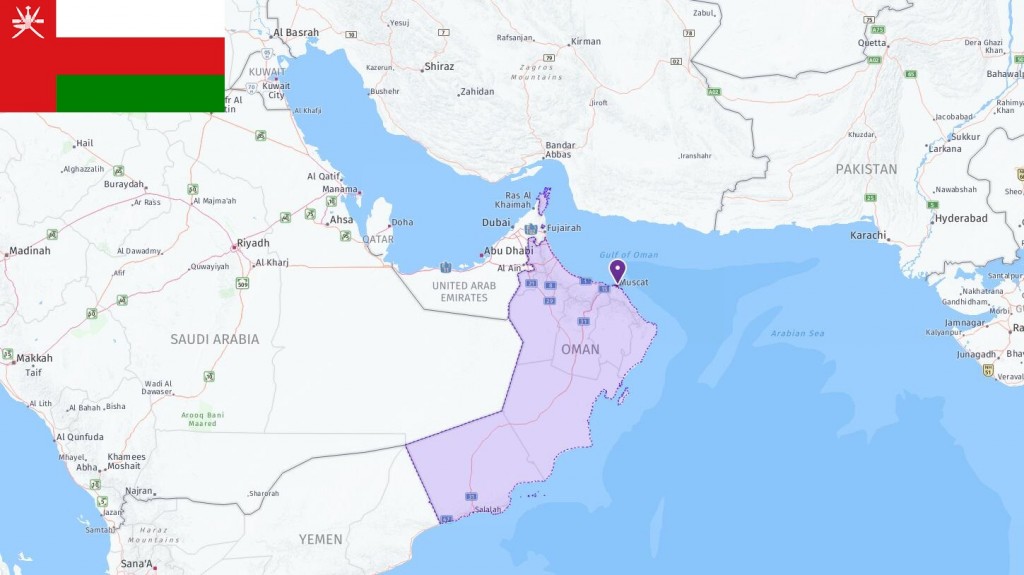 The most commonly used abbreviations about Oman are OM which stands for Oman and OMR which means Rial (Oman currency). In the following table, you can see all acronyms related to Oman, including abbreviations for airport, city, school, port, government, and etc. 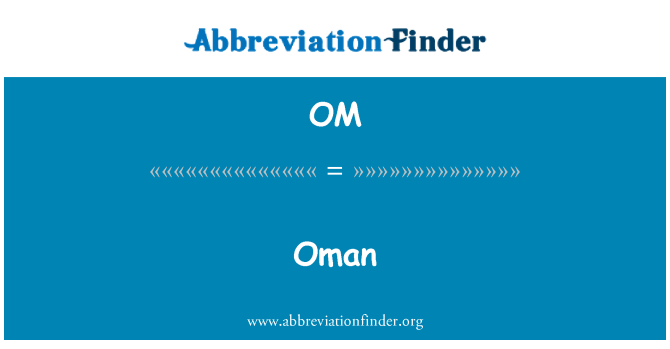 Oman is a barren desert land with a fertile coastal strip in the northeast and southwest. The coastal landscape alternates between plains and steep mountains that plunge into the sea. Along the coast to the north lies the al-Hajar mountain range with the country’s highest mountain Jabal ash-Sham at 3035 m. The only forest area is a mountain range in the south. Oman also controls two small separate enclaves totally enclosed by the United Arab Emirates. The climate is subtropical with warm dry summers and mild winters with some rainfall. On the coast, summers are very hot and humid. The majority of the country’s precipitation falls along the coast and in the southern mountainous region.

The biggest environmental challenge in Oman is the lack of fresh water. 97 percent of all fresh water in the country is used for agriculture. The water comes mainly from reservoirs under the desert or desalinated seawater. Due to a high mineral content in the water, the soil has increased its salt content and has thus become less fertile. Another environmental problem is oil spills and pollution of the coastal areas from shipping traffic through the Strait of Hormuz.

Oman became a Muslim state as early as the mid-600s with an imam as the supreme religious and political leader. In the 15th century, the country developed into an important trading nation with trade relations with India and China. After protracted conflicts with European maritime nations, the foundations of today’s ruling dynasty came to power in 1749. The new dynasty moved the capital to the coast, which the inland people did not accept. The country was divided into an imam-controlled inland state and a sultan-controlled coastal state.

The coastal state grew rapidly through trade in African slaves, military power and friendship agreements with the United Kingdom. At the beginning of the 19th century, the Omani Empire stretched across the northwestern Indian Ocean. When the slave trade was banned in the mid-1800s, the economic foundation of the empire disappeared, and a protracted war between the inland state and the weakened coastal state began. The war lasted until the 1930s when the Sultan (who ruled the coast) took control of all of Oman today.

In 1965, civil war broke out when the Dhofar area south of Oman demanded independence with support from China, the Soviet Union and South Yemen. The war lasted until 1975, when the uprising was fought with military aid from Britain, Jordan and Iraq.

After the civil war in the 1970s, the sitting sultan was thrown. The new sultan started a modernization process and opened the closed and conservative country to the outside world. Today, Oman is a sultanate (a kind of monarchy), where all power is gathered by the sultan and the government designated by the sultan. The country does not have democracy, and its citizens have no real opportunity to influence politics. There are no political parties. There is a lower house (chosen by the people) and an upper house (chosen by the sultan) with advisory roles for the sultan. If the Sultan dies, the successor will be chosen by the Said family within three days. If this does not happen, the Defense Council shall appoint the successor the Sultan himself would have. Oman is the only country in the world where ibadi Islam is state religion. Ibadism is a conservative direction, which differs from both Sunni and Shia Islam.

The country has a well-developed welfare system with pensions, child support and toll-free health and sick care. Despite the modernization process, politics and society are influenced by old traditions. According to the law, women are to receive equal pay as men, but discrimination in working life and in society is still widespread.

Oman has seen great economic growth since the 1970s thanks to the discovery of oil and the modernization of society. Today, the economy is based on the extraction and export of oil and gas. This industry accounts for around half of the country’s gross domestic product, and over 70 percent of total export revenue. Oil and gas revenues have been largely used to develop infrastructure, industry and other industries that can balance the economy when the oil and gas deposits are used up. In particular, the industry has grown strongly since the 1990s. Cement and building products, petroleum refining, aluminum and copper are the most important industries.

The country has also focused on developing agriculture, animal husbandry and fishing. In recent years, it has become an important political issue to make the country less dependent on food imports. Although only 0.1 per cent of the area is arable land, the agricultural industry has grown strongly. Tourism is another industry in growth, with more focus on the time to come. In order to attract more foreign investment, special economic zones have been established where foreign companies can receive up to 30 years of tax exemption.