Sydney has in two hundred years evolved from being a miserable British penal colony to an international metropolis and one of the most popular destinations in the southern hemisphere. Sydney is not the capital of Australia, but the capital of the Australian state of New South Wales, has a warm and sunny year-round climate and a host of attractions to offer its visitors.

And not least, the town’s inhabitants are exceptionally jovial and talkative. Especially after the 2000 Summer Olympics, Sydney has experienced a tourist boom, and Sydney’s facilities have also improved significantly.

Sydney is a fascinating mix of old and new. On one side you have modern glass and steel skyscrapers, and the world-famous Opera House, and on the other side The Rocks district, where historic buildings lie along narrow cobblestone streets.

Sydney’s nightlife has legendary proportions, and during the daytime you have one of the world’s best and most famous beaches, Bondi Beach, half an hour away from downtown. In short, Sydney is a city where young people, couples, singles and retirees will be able to have a fabulous holiday.

Get to know Sydney

Sydney is Australia’s largest city and is located on the south east coast, about the same latitude as Cape Town and Buenos Aires. Although people have lived in the area for about 40,000 years, Sydney’s modern history does not begin until 1770, when Captain James Cook sailed into Botany Bay with the ship Endeavor. He called the country New South Wales and claimed it for England, which at this time was looking for a place to deport its troublemakers.

18 years later, in 1788, Captain Arthur Phillip arrived with the first ship loaded with a thousand convicted prisoners and founded a penal colony at Sydney Cove on Port Jackson. The colony was named after Lord Sydney politician Thomas Townsend, who had given Captain Phillip the task. The colony was constantly at odds with the local Aborigines, and many of these died of diseases the British carried. The colony grew rapidly and in 1842 was declared Australia’s first city.

In 1851 gold was found 20 miles west of Sydney, leading to massive immigration. Over the next twenty years, the population more than quadrupled. In 1870, there were around 200,000 inhabitants in Sydney. Today, Sydney has grown into a large city with over 4.2 million inhabitants and is the economic center of Australia. Sydney is also the country’s premier tourist attraction, first and foremost world renowned for the two landmarks of the Opera House and Harbor Bridge.

Sydney Harbor divides Sydney into two, and the portions are connected by the Harbor Bridge and the Underwater Harbor Tunnel. Sydney Harbor is actually called Port Jackson and is the world’s largest natural harbor. Most of the attractions can be found in the city center, also called the Central Business District or CBD, located south of the harbor. The central area of ​​the CBD is the quays of Circular Quay, where boats go to the rest of the region. From Circular Quay you can see the Harbor Bridge stretching from the historic The Rocks district north of Sydney to the famous Opera House majestic at the extreme end of Bennelong Point in the east.

The CBD extends down to Sydney’s main train station, and the east side is dominated by large green spaces such as the Royal Botanic Gardens, The Domain, Cook + Phillip Park and Hyde Park. The main thoroughfare is George Street, which extends from Chinatown in the south, at the train station, to The Rocks in the north. The main shopping area is around Pitt Street, which runs parallel to George Street.

West of the CBD lies Sydney’s other major theme park, Darling Harbor. This is a popular area for tourists, with attractions such as the Sydney Aquarium, the Powerhouse Museum, the Sydney Convention and Exhibition Center, Paddy’s Market and the Australian National Maritime Museum. This is also Sydney’s premier nightlife area.

To the east of the CBD lies the Darlinghurst district, which is best known for its Sydney Gay and Lesbian Mardi Gras and its Australian Museum. Northeast of Darlinghurst lies the densely populated Kings Cross district, which has gained a fringe reputation as Sydney’s Red Light District. Between Kings Cross, Darlinghurst and The Domain Park lies the district with the festive name Woolloomooloo. This was originally an area for the poorer working classes, but has become one of Sydney’s more upscale neighborhoods in recent years after celebrities like Russell Crowe settled here.

A few miles southeast of downtown are the beach suburbs of Bondi Beach and Coogee Beach. The former, which is otherwise pronounced Bondai, with print on the last syllable, is one of the world’s most famous beaches and attracts tens of thousands of sun worshipers, surfers and sand volleyball players daily. Every Sunday the popular Bondi Beach Markets are organized. Coogee Beach is a densely populated suburb with a great beach, but surfing is not allowed here. Families often enjoy it better here than on the slightly more hectic Bondi Beach.

Crossing the Harbor Bridge to northern Sydney, you will first reach the North Sydney and Kirribilli boroughs, where you will find attractions such as the Luna Park Amusement Park, Prime Minister Kirribilli House and the Governor’s Residence Admiralty House. Just east of Kirribilli is the large Taronga Zoo and Sydney Harbor National Park.

SYDNEY – Australia’s largest city and capital in the state of New South Wales. 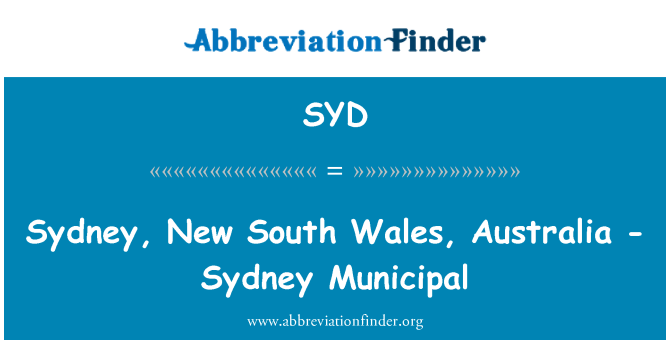 The most commonly used abbreviations about Sydney is SYD which stands for Sydney. In the following table, you can see all acronyms related to Sydney, including abbreviations for airport, city, school, port, government, and etc.