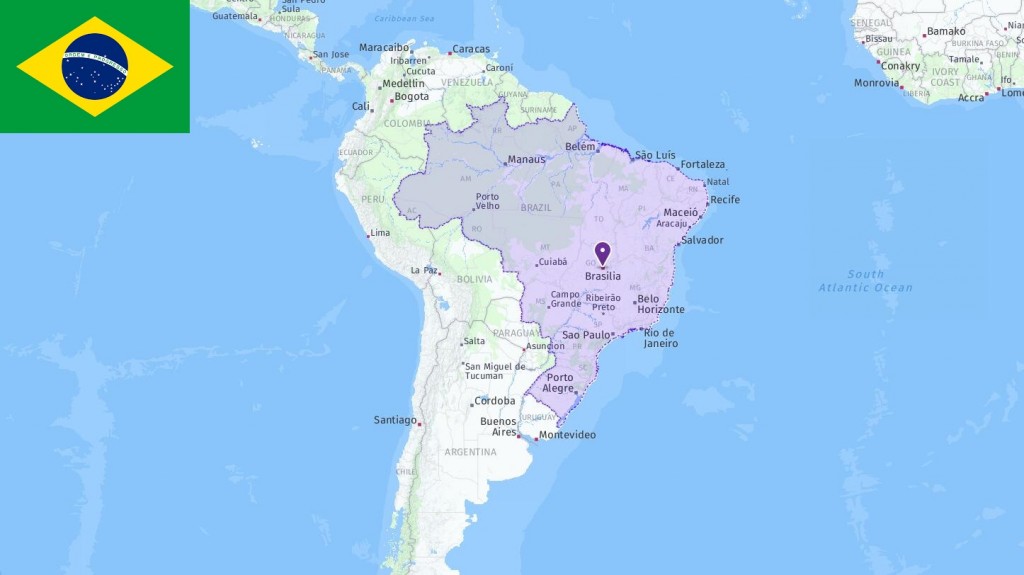 The most commonly used abbreviations about Brazil are BR which stands for Brazil and BRL which means Real (Brazil currency). In the following table, you can see all acronyms related to Brazil, including abbreviations for airport, city, school, port, government, and etc. 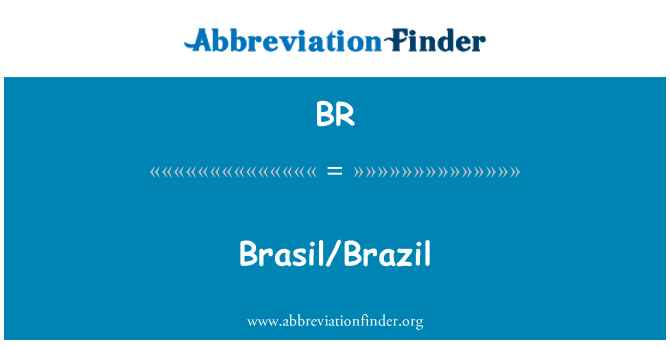 Brazil is the fifth largest country in the world after Russia, Canada, China and the United States. The country has a very varied landscape. In the northern part lies the world’s largest rainforest area, the Amazon. There is also the Amazon River, which by volume accounts for one third of all river water on Earth. In the tropical rainforest there are 40,000 plant species. The southern part of the country is covered by mountains and savannah areas with forest. Brazil also has a long coastline. The majority of the population live at or near the coast, especially in the southeast around the cities of São Paulo, Rio de Janeiro, Belo Horizonte, Curitiba and Porto Alegre. The climate is tropical and it often rains year-round. The difference between winter and summer is small.

Deforestation and harvesting of the rainforest is the biggest environmental problem in Brazil. In the tropical rainforest, the soil layer is thin and the forest vulnerable. Already in 2005, one fifth of the forest had been cut down. In 2020, deforestation is reported to have caused one fifth of the Amazon to emit more carbon dioxide than it absorbs. Mining, cattle farming, agriculture and urban growth are the main causes of deforestation. Loss of rainforest leads to a reduction in the country’s rich plant and animal life, while also threatening the livelihoods of the local indigenous people. Air and water pollution also pose major environmental problems, especially in and around the big cities.

People have lived in Brazil for more than 11,000 years. Indigenous peoples farmed in some parts of the country, while in other parts they lived as hunters and sanctuaries. Portuguese were the first Europeans to arrive in the area in the year 1500 AD. When the Portuguese arrived, between three and five million people lived in the area. Large parts of the indigenous population died as a result of the diseases the Portuguese brought with them. The Portuguese established sugar and coffee plantations in the country, and provided cheap labor by using the indigenous people as slaves. In addition, the colonial power carried many millions of African slaves to the country.

In 1822, Brazil became independent from Portugal. Until 1889 the country was an empire, where coffee, made by slaves, was the most important industry. As the last country in the world, Brazil abolished slavery in 1888.

After a military rebellion in 1889, the empire was replaced by a republic. The country has since gone through major political upheavals. From 1930 to 1945, and from 1964 to 1985, Brazil was a military dictatorship. After the dictatorship was overthrown for the last time, Brazil has developed a democratic regime. Major economic inequalities and corruption have characterized the country’s recent politics.

The president is the country’s head of state and government, and is elected every four years. The president can be re-elected once, and must then forgo at least one term to run for re-election.

Since 2003, when the equitable distribution of the country’s resources and economy was put on the agenda, millions of Brazilians have been lifted out of poverty. However, the economic differences between the poor and the rich continue to be a major problem, and Brazil is the country in South America with the greatest economic inequality. Over 20 per cent of the population lives in slums (favelas) around the cities. In several of these areas, the police and the state have lost all control, and organized criminal gangs have taken power.

The distribution of land in Brazil is also very skewed. A small part of the population owns a large proportion of the land, and there are therefore millions of landless land workers. Ever since colonial times, district politics has been an inflamed theme in Brazil. Corruption has long been a part of Brazil’s political culture. In recent years, the country has been hit by a number of major corruption scandals, which have involved both politicians and business leaders.

Brazil’s financial management is a mixture of capitalism and state control. In 2014, the country struggled with economic downturns, but in 2017 Brazil’s economy again had a small surplus. Despite large foreign debt, corruption, and a lack of educated manpower, Brazil is South America’s largest and most important economy. The country’s economy is among the world’s 10 largest economies.

Agriculture accounts for a large proportion of the country’s export revenue. Brazil is a major producer of soybeans, coffee and bananas. In addition, the country is the world’s largest exporter of chicken and beef. Other important agricultural products are sugar cane, tobacco, cocoa beans, wheat, corn and rice. Brazil is also the most important industrial state in South America. Among other things, the country produces cars, aircraft, various machines, electrical products, rubber products, clothing and textiles. The tourism industry, and the extraction of minerals and gemstones are other important industries.

Several economic and government programs have been introduced to reduce the large differences between poor and rich. Among other things, the minimum wage has been increased. These measures have had an effect, but are also putting pressure on the economy, leading to increased inflation and increasing budget deficits for the state.