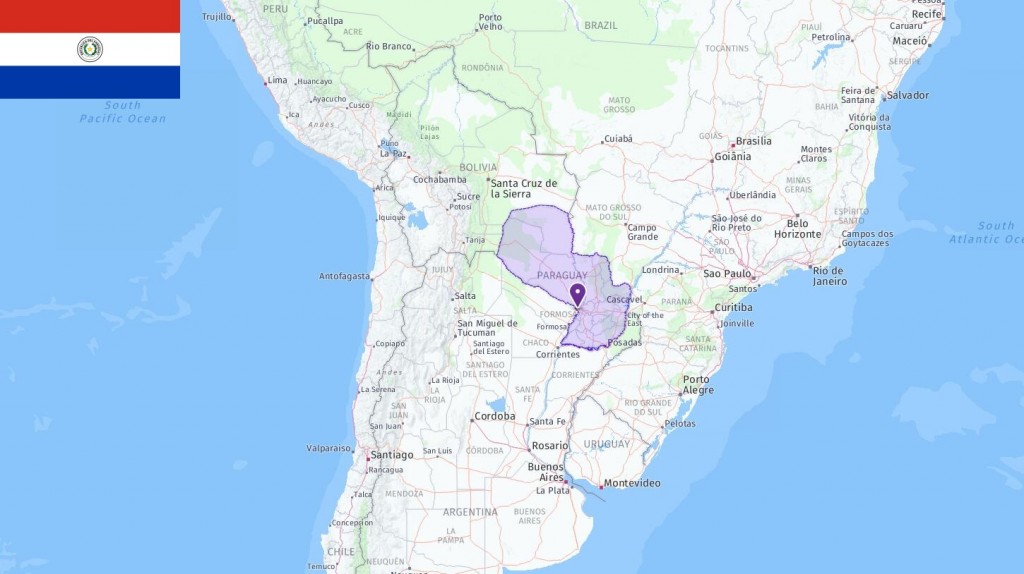 The most commonly used abbreviations about Paraguay are PY which stands for Paraguay and PYG which means Guaraní (Paraguay currency). In the following table, you can see all acronyms related to Paraguay, including abbreviations for airport, city, school, port, government, and etc. 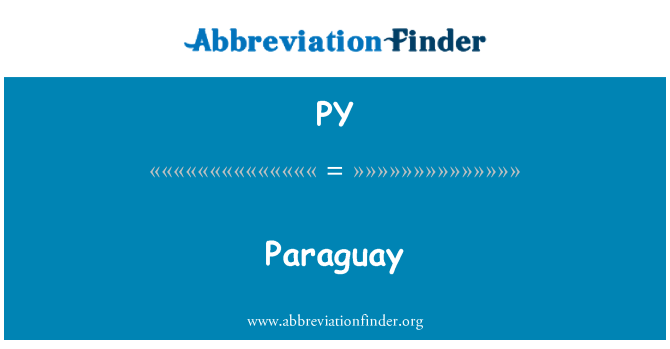 Paraguay is an inland state in the middle of the South American continent. Most of the country consists of lowland and forest. The Paraguay River flows from north to south and divides the country into two. The areas west of the river are part of the Chaco Plains landscape while to the east of the river are large forests and rolling countryside. Along the river there is a wide swamp area that is flooded every year. The climate is subtropical, with hot summers and mild winters.

Deforestation and water pollution are a serious environmental problem in Paraguay. Toxic waste from industry and agriculture causes pollution of wetlands and rivers in the country. Lack of garbage handling around the cities has also led to drinking water and air quality being a major health risk. This goes especially hard for the poorest sections of the population who are unable to move away from the polluted areas.

Paraguay was populated for over 1,000 years before Europeans arrived. The Guarani people who lived in the area had a relatively developed community, but never lived in any unified state. When the Spaniards arrived in 1537, they founded the Asuncion. The city (which is still the country’s capital) became the center of the Spanish expansion further in the area. As a result of Spain’s defeat in the Napoleonic wars in 1811, Paraguay exploited the political turmoil and declared itself independent. Paraguay therefore became the first free country in South America.

The 19th century was characterized by coups and conflicts with neighboring countries. In a war against Brazil and Argentina, large parts of Paraguay were occupied and destroyed. Over half of the population died. Throughout the 1900s, citizens were politically divided between conservatives and liberals. A military coup in 1954 began a long period of dictatorship. Then all political opposition became illegal, leading to imprisonment and torture. Around one third of the population fled abroad during this period. The dictatorship lasted until 1989, when a US-backed coup d’état initiated a democratization process. Paraguay had its first free and democratic elections in 1993. Since then, democracy has been unstable, but the last elections have been free and fair.

Paraguay is a republic where the president is the head of state and the head of government. The president is elected for five years and cannot stand for re-election. The president elects his own government and has veto power over decisions made by parliament. Despite Paraguay being a democracy today, the country is struggling with the legacy of being a dictatorship. Both politics and the judiciary are characterized by widespread corruption.

Paraguayan society is struggling with great social and economic differences. Drug trafficking, crime and poverty are widespread societal problems. In particular, there is a big difference in the quality of life in the countryside, in the slums and in the cities. In the countryside and in the slums around the cities, health services are poorly developed, child mortality is high and malnutrition among young people is widespread. Poorly developed water and toilet systems in rural and slum areas lead to the spread of diseases and waterborne viruses.

Paraguay is a conservative society. In 1961, the country was the last in South America to allow women’s suffrage. Still, women’s position in society is not equal to that of men. Abortion is prohibited unless there is a danger to women’s lives, and social and sexual abuse of women is a major problem.

Despite many natural resources, Paraguay is one of South America’s poorest countries, the economy is largely agriculture-based. Meat, corn, grain and soy are the most important agricultural products. Soy is the most important export commodity, accounting for about 40 percent of export revenue. Export of energy from the country’s large hydropower plants is also an important source of revenue for the state. Due to the country’s history of unstable politics and mistrust of the state, Paraguay has a large unofficial black economy (a hidden and illegal economy that is not taxed). Some estimates show that this accounts for more than 60 per cent of the country’s total economy. Corruption and the military’s involvement in the illegal economy have made it difficult to prevent the country from becoming a smuggler’s paradise, and they are a transport hub for drugs.