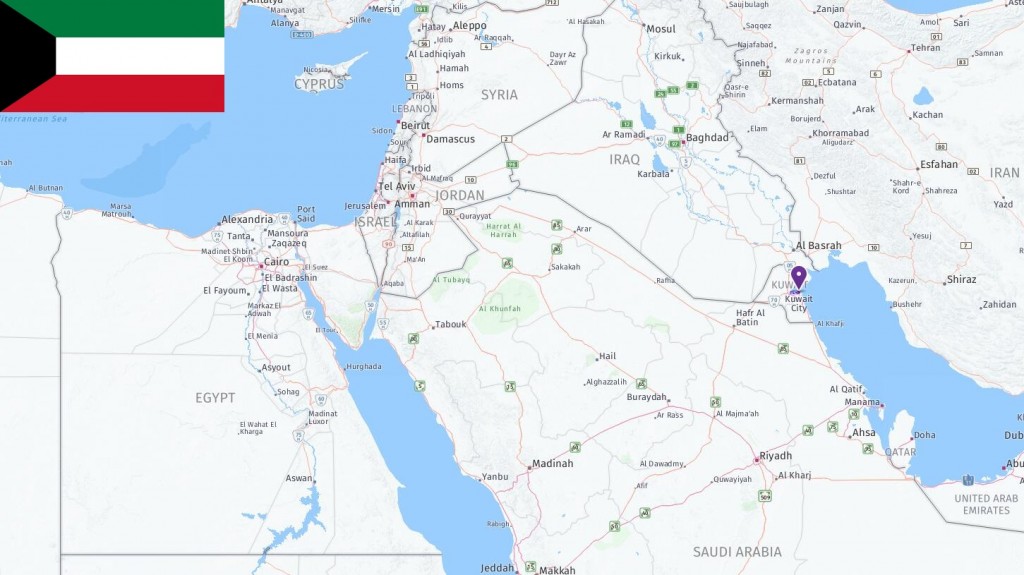 The most commonly used abbreviations about Kuwait are KW which stands for Kuwait and KWD which means Kuwaiti dinar (Kuwait currency). In the following table, you can see all acronyms related to Kuwait, including abbreviations for airport, city, school, port, government, and etc. 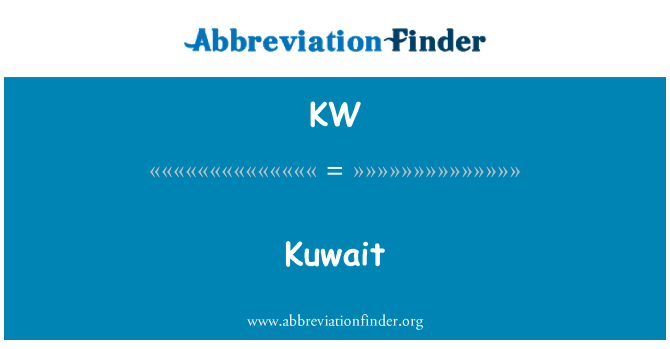 Kuwait is located in one of the driest areas in the world. The country consists of a rolling hills with low hills. The low ridges have a special meaning; gravity allows crude oil to flow from the higher oil fields at Burghan to the coastal export ports. The country’s highest point, the Mutli Ridge, is 306 meters above sea level. Kuwait has nine islands that belong to the country. Of these, only the island of Faylakah has a permanent settlement. The Gulf of Kuwait, which is part of the Gulf of Persia, cuts into the country. The bay forms a large and well protected harbor area. On the mainland there are neither rivers nor lakes.

Kuwait has a subtropical desert climate with very hot and dry summers and cool winters. The temperature in summer often rises to 50 ° C, while in winter it can drop to 0 ° C. There is almost no vegetation, and wildlife is limited to insects and reptiles. It is often a sandstorm. Fresh water shortages are a major problem in Kuwait, but one of the world’s largest and most modern desalination plants provides much of the country’s water supply. Kuwait also has air pollution problems.

People have lived in Kuwait for at least 4,000 years. Modern Kuwait is usually dated to the 17th or 18th centuries, when Arabic-speaking tribes immigrated from other parts of the Arabian Peninsula. The present Al-Sabah dynasty was established in 1756. At that time, the country was a trading center in the region, and the population lived by trade and fishing.

To avoid being incorporated into the Ottoman Empire, the country signed a protection agreement with the United Kingdom in 1889. During World War I, Kuwait became a British protectorate. The country became independent from the United Kingdom in 1961. In the 1970s-1980s, Kuwait was the most developed country in the region. The oil recovery, which had started as early as the 1930s, over time had given Kuwaiti work and the opportunity to build up a large welfare system.

Kuwait’s history is characterized by a tense relationship with neighboring countries. Iraq claimed Kuwait several times during the 20th century. In 1990, the Gulf War broke out when Iraq invaded Kuwait. The invasion was condemned by the international community, and US-led forces with UN mandates liberated the country the following year.

Kuwait is a monarchy with the emir as head of state. The country has a people-elected parliament, but the emir has great power. The Emir appoints the prime minister, who elects the rest of the government. The prime minister is traditionally a member of the royal family. Political parties are prohibited, but in parliament there are governmental and opposition groups. This has created political instability. The Emir has repeatedly dissolved parliament and new elections have been held. After the Arab Spring, the opposition has demanded that the country move in a democratic direction. The position of women has been particularly strengthened after women were given the right to vote in 2005.

Kuwait has a more open political system and a freer press than most neighboring countries. At the same time, it is forbidden to criticize the emir, the constitution, the judiciary and Islam. In addition, opposition politicians have been deprived of citizenship and imprisoned. The judiciary is governed by the emir and the death penalty and torture occur.

Kuwait is one of the most urbanized countries in the world, and almost all residents live in Kuwait City. Only one third of those living in the country are Kuwaiti nationals. The rest are guest workers from Asia and other Arab countries, with few or no rights and social benefits.

Kuwait is a country with a high standard of living and a well-developed welfare system for the population that are not foreign workers. The majority of Kuwait’s people work in the huge public sector. The sector has far more employees than necessary. This means that four-fifths of the public budget goes to wages and subsidies, but also to low unemployment in the country.

The oil industry dominates the Kuwaiti economy, accounting for over 90 percent of the state’s revenue. This was a problem during a period of falling oil prices. At the same time, the country had to finance the large public sector. In recent years, privatization has taken place, except in the oil and gas, and health and education sectors. A plan for economic development has also been presented, in which it will invest in industries other than oil and gas.

Kuwait has an open economy, with low tariff walls and free flow of goods, capital and labor. The country’s most important export commodity is oil. At the same time, the country imports almost everything else. The United States has long been Kuwait’s most important trading partner, but the country is increasingly cooperating with Asian countries, such as South Korea, Japan, China and India.

The UN Association is offering a role-playing game for the 2019-20 school year in which students will try to resolve a conflict in the Security Council (Iran and the nuclear issue). Kuwait is a member of the Security Council, and the sections that follow are information related to this game.

Kuwait’s recent political history is partly characterized by Iraq’s invasion of the country in 1990. They have a strained relationship with the countries that supported Iraq during the invasion – including Yemen. Saudi Arabia, on the other hand, was among the Arab countries that helped Kuwait in 1990. In addition, Saudi Arabia contributed to the United States and the West joining the conflict on Kuwait’s side.

After the Gulf War in 1990-91, Kuwait has been concerned with acquiring allies around the world – and especially among the major countries of the UN Security Council. The country has therefore entered into defense agreements with both the United States, France, the United Kingdom and Russia. In addition, Kuwait has a pretty good relationship with China. Relations with Iran are also relatively good.

Like most other countries in the Security Council, Kuwait is concerned that the nuclear deal with Iran will be destroyed as a result of the US withdrawal. Kuwait is also afraid of the consequences of an armed conflict between the United States and Iran, and that the conflict may affect shipping and oil transport through the Persian Gulf. Much of Kuwait’s oil exports are on ships passing through the Strait of Hormuz. If this sea area is closed as a result of war, it will have immediate consequences for the economy of the country. Kuwait must try to balance its close relationship with the United States and the need for free movement in the oceans, with a strong defense of Iran’s right to have a nuclear program for peaceful purposes.

In a meeting on nuclear disarmament in the Security Council 02.04. In 2019, Kuwait condemned any use of weapons of mass destruction (whether nuclear, chemical or bacteriological), and called such use for clear violations of international law. The country also reiterated its unreserved support for the Nuclear Non-Proliferation Treaty, stressing that confidence in this agreement is thin because it has not yet implemented the 1995 decision to create a nuclear weapons-free zone in the Middle East. This was in its time a very basic condition for extending the Non-Proliferation Agreement indefinitely.

Kuwait stressed in its speech that the entire Arab world is still waiting for the resolution of a nuclear weapons-free zone in the Middle East to be implemented. The responsibility for this to happen lies in particular with the countries that in 1995 made the motion for a resolution to create the zone – USA, UK and Russia. Kuwait also emphasized the need for Israel to accede to the Nuclear Non-Proliferation Agreement as soon as possible, thus accepting regular inspections by the Atomic Energy Agency (IAEA) of its entire nuclear program.

In 2014, Kuwait was one of the Arab countries that, on the initiative of Egypt, signed a separate plea for the UN that all countries in the Middle East, plus the five permanent members of the Security Council, should write a letter to the UN Secretary-General. The letter was to reiterate support for the 1995 resolution to make the Middle East a nuclear-free zone. This call, and other initiatives by Arab countries that the UN should immediately hold the conference to create the nuclear-free zone in the Middle East, have so far not provided the necessary clarification to proceed with the matter. Kuwait is one of several countries disappointed by the lack of progress in the matter.