Milan is the gateway between Italy and central Europe and is the center of power for design, fashion and the successful financial industry. The city of Milan is a modern metropolis and in many ways different from other Italian cities. Here are elegant quarters and avenues where you will find the best and most fashionable shops in the world. But here are also busy city streets with noisy cars, trams and buses.

Milan is large and diverse and can often feel a little impersonal. But the city has its bohemian quarter where you will find narrow charming streets, small piazza and cozy restaurants so typical of Italy.

The Milanese themselves are passionate about style and appearance, and are well aware of their financial success. And they are proud of their football team. Surely there are no cities in the world that have two better football teams than Milan in Inter and AC Milan ? In addition, Milan offers two of the world’s greatest sights, namely Leonardo da Vincis The Last Supper and the wonderful Il Duomo, which we often call the Milan Cathedral.

It is not a long flight to Milan and the temperature is comfortable all year round, although it is naturally best to visit the city in the period April to October. Milan has something for everyone, you just have to know where to go.

Get to know Milan

Milan is believed to be of Celtic origin dated as early as about 600 BC. Around 222 BC, the city became subordinate to the Romans and Milan eventually became the most important city after Rome. Throughout history, Milan has been the scene of many different wars and had many famous rulers, including Napoleon.

As late as World War II, Milan was back in focus. Mussolini’s fascist movement had its beginnings here and it was in Milan Mussolini was killed in 1945 at the same time as the city was bombed. After the war, Milan has experienced rapid economic growth and the province of Milan is at the top of Europe in terms of living standards per capita. The city has about 1.3 million inhabitants and appears as a modern and different Italian metropolis.

The station area in Milan

The station area is located northeast of Milan. Trains and buses from the three surrounding airports arrive at Milan’s central train station. This is one of Italy’s most important and largest railway stations. Here, as in most railway stations in Europe, there are many simple but good hotels. The area is a communications hub and trams bring you quickly and cheaply down to the center of Milan.

The Brera area is our personal favorite area in Milan, with its narrow charming alley and pleasant nightlife. Brera is located north of the center of Milan, but south of the station area. Brera has traditionally been a bohemian area and hangout for artists, but is now trendy and popular for both visitors and the city’s own residents.

The name Brera itself means something like meadow or field. In many ways, Brera represents what you expect in Italian cities, with picturesque buildings, narrow streets opened by piazza with local restaurants and bars. You will find several attractions in Brera, not least the Pinacoteca Nazionale di Brera which is an art gallery with a wide collection of works by, among others, Raphael and Mantegna. Teatro Strehler and the church Carmine are examples of other buildings you should bring with you when you are in Brera.

Montenapo and Giardini district of Milan

East of Brera you will find the Montenapo area. The area is Milan’s fashionable fashion district, not least because of Armani, Dolce & Gabbana, Ferré, Krizia, Missoni, Valentino, Versace and Zegna outlets. The Montenapo area comes from a state mortgage store that opened here during the Napoleonic era.

Via Monte Napoleone with its narrow side streets is considered Milan’s most elegant area and is clearly one of the most sophisticated in the world. In addition to window shopping (if you don’t have a lot of money) it is here you go to see the young, beautiful and successful in the Italian fashion industry. At times it can get fussy and too much traffic, and strong forces in Milan want to make the area car-free.

Montenapo is one of the most important areas for museums throughout Italy. Among many other things you will find the Museo Poldi Pezzoli, with its exceptional collection of paintings, antique clocks, weapons and much more, and not least Museo Bagatti Valsecchi, which has an amazing mix of Renaissance and 18th century masterpieces.

Most arrive in the Montenapo area and its museums from Piazza San Babila or Piazza Cavour on Via Manzoni Street.

Just north of Monte Napoleone you will find the most central of Milan’s city parks, Giardini Pubblici. It was designed by Giuseppe Piermarini in the 18th century, at the same time as the opera La Scala. The park has later been both enlarged and extensively decorated.

The area is a perfect place for children and for walks in green surroundings. The area also houses the Hoepli Planetarium and the Museo di Storia Naturale (Natural History Museum).

On the other side of Via Palestro Street on the south side of Giardini Pubblici Park you will find Villa Reale with its beautiful gardens. Remember that children are only allowed to accompany adults in Villa Reale. If you are interested in art, it is good to know that the Galleria d’Arte Moderna (Museum of Modern Art) and PAC (Padiglione d’Arte Contemporanea) (contemporary art museum) are located here.

Triennale and Castello area of ​​Milan

West of the Brera area you will find the Triennale where the huge Parco Sempione park is located. This area is full of sights, not least the Palazzo dell’Arte, the building where the Triennale Exhibition is always held.

Triennale is Italy’s most important exhibition of modern and industrial art. Here you really get an overview of upcoming trends.

East of Sempione Park at Piazza Castello you will find Castello Sforza. This castle or palace if you will, is something very special. The palace was built by the Visconti and Sforza families, who were rulers of northern Italy at the end of the Middle Ages. The castle was restored in the early 1900s to house libraries, galleries and museums. The art is from the late Middle Ages to the Renaissance period. The most important work is Rondanini Pietà by Michelangelo.

North of Castello Sforza lies Civic Arena or just Arena. The arena was built in the early 1800s for festivals and celebrations modeled by the Roman amphitheatres. It is today primarily used as a sports arena, and the arena is definitely worth a look.

Milan is the second largest city in Italy in terms of population (after Rome) and is the capital of the Lombardy region. Milan is an excellent hub for traveling north of Italy. There are a number of great Italian metropolitan cities within easy reach of Milan. 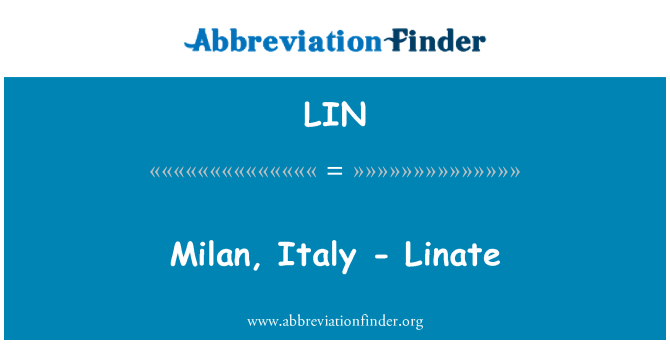 The most commonly used abbreviations about Milan is LIN which stands for Milan. In the following table, you can see all acronyms related to Milan, including abbreviations for airport, city, school, port, government, and etc.