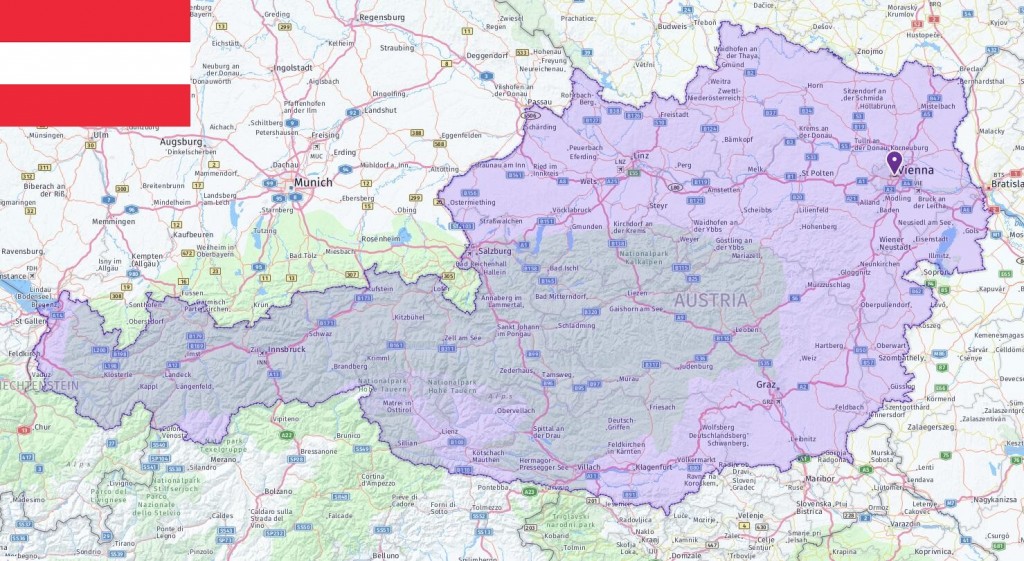 The most commonly used abbreviations about Austria are AT which stands for Austria and EUR which means Euro (Austria currency). In the following table, you can see all acronyms related to Austria, including abbreviations for airport, city, school, port, government, and etc. 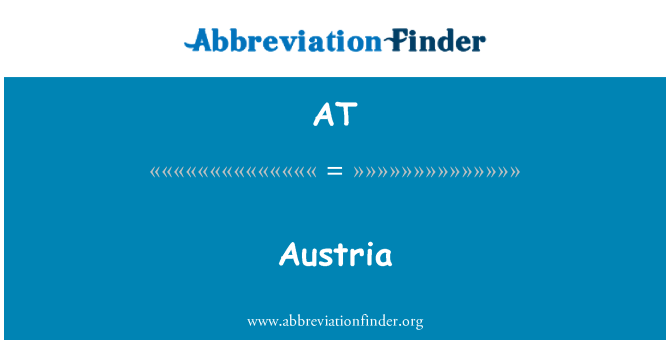 Austria is a mainland state in Central Europe. The landscape can be divided into three parts. The Alps mountain range characterizes the country’s western and central areas. To the north lies the Bohemian massif, which consists of hills and forest landscapes. In the east, the landscape is characterized by lowlands and steppes. The Danube, Europe’s second longest river, flows from west to east farthest northeast of the country. The river is used for hydropower and is an important waterway for trade. The climate varies according to the landscape. In the Alps there is a lot of rainfall, which in winter falls like snow. The temperature varies widely depending on the height. In the north and east the climate is continental, with hot summers and cold winters. Here there is relatively little rainfall. In the south, the climate is characterized by proximity to the Mediterranean. Here, summers are warmer than the rest of the country, and winters are milder.

The biggest environmental challenges in Austria are man-made. Emissions from industry, agricultural pesticides, and increasing road traffic have led to acid rain. The country has long worked to reduce emissions, but as of today, the acid rainfall has destroyed 25 percent of the country’s forest areas. Pollution of the country’s major rivers is another major problem.

Austria has been inhabited by various groups of people for thousands of years. From the year 15 BCE the area became part of the Roman Empire. In 962, Austria was established as a border state in the German-Roman Empire. The state became a barrier against the powerful Turkish people of the east. In 1276, the Habsburg family came to power in the country. The Habsburg family became one of the most powerful dynasties in Europe, and in 1526 the Habsburg family, the Bohemian (Western Czech) and the Hungarian kingdoms were united through marriage. After many years as Europe’s most powerful kingdom, several major wars led Austria to lose large territories. In 1867, Hungary and Austria were united in a double monarchy in which both countries should be equal. When the Austrian-Hungarian throne heir was shot down in an attack in 1914, this triggered the first world war.

During both world wars Austria was on the German side. As a result of the loss in World War I, Austria lost power over Hungary. Following the loss in World War II, Austria was divided into four occupation zones controlled by the United States, Britain, France and the Soviet Union. The occupation lasted until 1955, when Austria promised to be foreign policy neutral in the future. Austria joined the EU in 1995.

Austria is a federal republic consisting of nine states. Each state has its own parliament and government and is led by a head of state. Austria’s head of state is a president who is elected every six years, but who mainly has a ceremonial role. The country’s executive power lies with a federal chancellor, who is the head of government. Parliament consists of two chambers: the National Council and the Federal Council. National Council representatives are elected directly for five years at a time. The Federal Council consists of representatives from the state parliaments. The voting age in the country is 16 years.

Immigration and the handling of refugees has become the most important political issue in Austria. The country has long had a strong ultra-conservative anti-immigration and anti-EU party. As the refugee flow to Europe increased in 2015, the party gained a lot of support. Since then, the fear of high immigration has spread to other parties in the country. Today, Austria has one of the strictest rules on immigration in Europe, and politics is characterized by conservative attitudes. Austria has a well-developed welfare system with sickness, old-age and unemployment insurance. The standard of living is very high and unemployment is low. Women are equal men in the country’s laws. Sexual minorities have good rights, and since 2013 same-sex couples have the right to adopt.

Austria has a well-developed market economy and an educated population. The country’s economy is largely privatized, and there are no state-owned companies. The population has previously had to pay a lot of tax, but this has changed since the year 2000. Exports play an important role in the country’s economy. So does the service sector – especially tourism. The country is one of the largest tourist destinations in Europe, with almost 20 million visitors a year. The economy is closely linked to the EU, and especially Germany, which is the country’s main trading partner. Austria has benefited greatly from the fact that many Eastern European countries joined the EU in the 2000s. Austrian companies have moved factories to, and bought shares in, several Eastern European EU countries.

Nearly 43 per cent of Austria’s land is agricultural land. Grain, sugar beets, potatoes, corn and grapes are grown in the lower lying areas. Austria is one of Europe’s largest producers of organic farming. Despite a well-developed industry, extensive agricultural production and large exports, the country has a trade deficit (they import more than they export). However, tourism makes up for the trade deficit, and the state’s economy has enjoyed good continuous growth for decades.