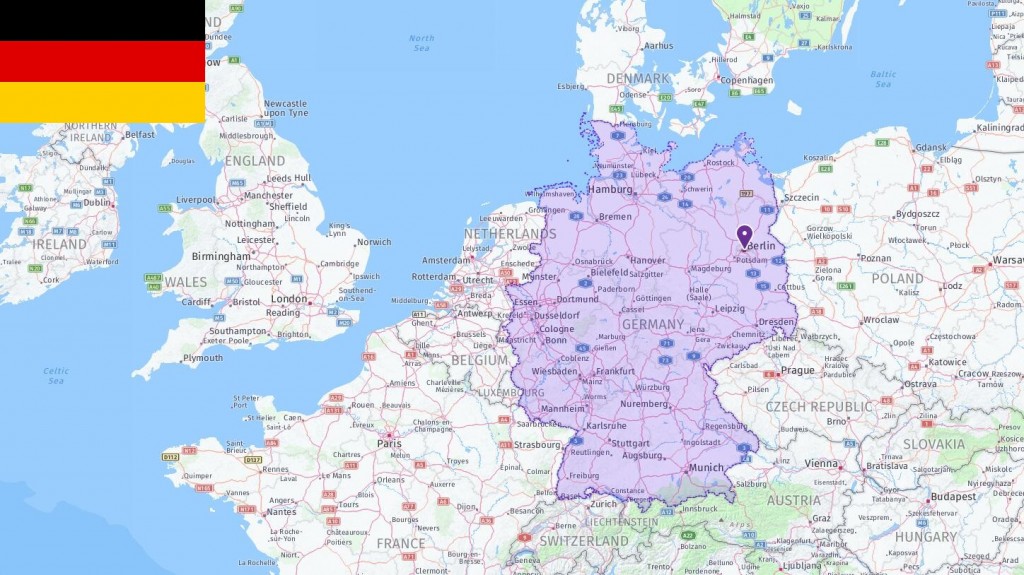 The most commonly used abbreviations about Germany are DE which stands for Germany and EUR which means Euro (Germany currency). In the following table, you can see all acronyms related to Germany, including abbreviations for airport, city, school, port, government, and etc. 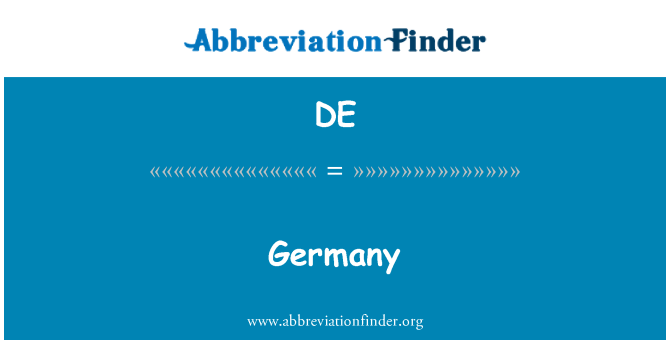 Germany consists of three different landscape areas: the northern German lowlands, with the coastal areas towards the North Sea and the Baltic Sea, the mountain areas in the middle of the country and the high mountain landscape in the south, which make up the northernmost parts of the Alps. The variations in the landscape mean that the country has a varied climate. In the north there is a temperate coastal climate, with hot summers and mild winters. Further south, there is a typical central European inland climate, with greater variations between seasons.

Many rivers flow through Germany, and the largest rivers are the Danube, the Rhine and the Elbe. The rivers have been important for the country’s central role in European trade. Large parts of the country are heavily polluted due to emissions from the heavy industry, which has led to acid rain and poor soil. Particular areas in former East Germany are struggling with pollution after many years of poor environmental regulation. By pursuing an offensive climate policy, Germany has managed to reduce greenhouse gas emissions since the 1990s.

In the centuries BCE. lived Germans and Celts in today’s Germany, but between the years 50 BCE. – 400 possibly the Romans also conquered areas. Several peoples fought for land in the next centuries, before Otto I became German-Roman emperor in 962. This was the beginning of the German-Roman Empire, a collection of smaller units with more or less autonomy. The kingdom existed until the Napoleonic wars of the early 19th century.

After repeated attempts to form unions between kingdoms in the 19th century, the German Empire was established in 1871, with Wilhelm I as emperor. The empire encompassed much of today’s Poland, and eventually also several colonies in Africa. After Germany took part in the losing side during World War I, the German empire collapsed. The empire was replaced by the Weimar Republic, which had to surrender large tracts of land and pay huge sums of war compensation during the war. The harsh conditions contributed to the rise of Nazism under the leadership of Adolf Hitler, in the early 1930s. In 1939, Germany started World War II by invading Poland. After losing World War II, Germany and Berlin were divided into four zones, and from 1949 divided into West Germany and East Germany. Germany was reunited as one country in 1990.

Since 1990, the West German Constitution of 1949 has been applicable to the entire country. The country is a federal republic and consists of 16 states with extensive self-government. The country’s formal head is the president, but in reality most of the power lies with the federal chancellor, who heads the government. The policy is dominated by the Christian Democratic CDU and the Social Democratic SPD, which has formed several coalition governments since Germany’s reunification.

The country is a stable democracy and has a well-developed welfare state. Immigration and refugee policy are important domestic policy issues in Germany. The country has received almost a million refugees since 2015, and opposition to this has led to the high immigration and anti-Islamist party Alternative für Deutschland (AfD).

Germany was a founding member of the European Union (EU), and today plays a key role in regional and international cooperation. In recent years, Germany has contributed to international military operations, for the first time since World War II.

Germany is the world’s fourth largest economy, after the US, China and Japan. The size is primarily due to a very well-developed export industry, which produces everything from fine electronics and computer equipment to cars and industrial machines. The country is not rich in natural resources and must therefore import both energy and most of the raw materials into industry.

After the reunification in 1990, the country entered a period of strong economic decline. This was due to the enormous cost of the transition to modern market economics in former East Germany. From being one of the Western European economies with the biggest problems in the 1990s and early 2000s, Germany has had higher economic growth since 2010 than most of the other eurozone countries. Germany also has low unemployment. However, social and economic development is lower in the states of the former East Germany than in the states that previously belonged to West Germany. Unemployment is also far greater in the eastern part of the country. The coming wave of old age, and large government spending on pensions, could also be a future challenge for the German economy.

The UN Association is offering a role-playing game for the 2019-20 school year in which students will try to resolve a conflict in the Security Council (Iran and the nuclear issue). Germany is a member of the Security Council, and the sections that follow are information related to this game.

As the reunited Germany has played an increasingly important role in Europe and the world, the expectations of the United States and others have been that the country should take on ever greater responsibility for global peace and security. However, this is disputed because. Germany’s historical role in the world wars of the 20th century. In 1994, the German Constitutional Court ruled that Germany could participate in international peace operations as long as they have a mandate from the UN Security Council. Germany is currently the fourth largest contributor to UN peacekeeping operations, and second largest donor to UN development assistance.

Germany has a close relationship with France because of the central role these two countries play in the EU. The relationship with Russia has traditionally been relatively good, but has cooled somewhat after Russia’s annexation of the Crimean peninsula in 2014. Germany otherwise has good trade relations with China. Germany is an important member of NATO and has both US military bases and tactical nuclear weapons deployed on its territory.

Germany is one of the three major EU countries that negotiated the nuclear deal with Iran in 2015. The country is a strong supporter of the agreement surviving despite the withdrawal of the United States and Iran has begun to enrich more uranium than the agreement allows. Germany, together with France and the United Kingdom, is one of the key countries in deciding what the EU should think about the conflict as it develops.

For Germany, it is important that the nuclear agreement survives because it expresses a cooperation between the world’s great powers that in the long term can both dampen the contradictions in the Middle East and contribute to strengthening the control mechanisms in the Non-Proliferation Treaty. The country is therefore very confident that the inspections carried out by the Atomic Energy Agency (IAEA) in Iran are working as intended. Germany is a warm defender of the Non-Proliferation Agreement, and makes significant contributions to the control work carried out by the IAEA. Thanks to the IAEA, hundreds of contracts for inspections and inspections have been made, thousands of nuclear site visits have been made, and one million documents have been reviewed covering various countries’ civil nuclear programs. None of this would be possible without an IAEA organization.

Germany is one of the countries working to stack on its feet an alternative trade mechanism (INSTEX) so that Iran can continue to trade with Europe without companies in those countries being affected by US sanctions. INSTEX currently has arrangements to enable food and medicines to be traded with Iran in euros instead of dollars, but few companies have used them so far. Iran, for its part, is positive to INSTEX, but believes that the mechanism must also include oil trade to meet its economic needs. Unless INSTEX is expanded, Iran threatens to gradually increase its enrichment of uranium beyond what the 2015 nuclear agreement allows.

A goodwill for Iran under the nuclear agreement does not mean that Germany and the other EU countries support Iran in all other areas. In recent years, the EU has expressed great concern about Iran’s role in regional conflicts in the Middle East (such as Syria, Yemen and Iraq), and wants Iran to impose voluntary restrictions on its military missile and missile program. In 2019, the EU has also imposed sanctions on individuals and organizations in Iran that they believe are behind attempts to kill Iranian dissidents living in Europe. Iran has refused to negotiate its missile program, and has also criticized EU countries for providing protection to what they call terrorist groups trying to control the Iranian regime. They deny any deal with plans and actions to kill dissidents on European soil.

When it comes to the recent turmoil in the Strait of Hormuz, Germany has asked both the US and Iran to show restraint. Germany, along with several other EU countries, participates in the Combined Maritime Forces naval force, which patrols the Persian Gulf to prevent various types of crime at sea (narcotics, terrorism, piracy). The United States has suggested that the force could act as an escort for merchant ships to sail through the area, but this fears Germany could cause the force to be involuntarily drawn into the fierce confrontation that the United States wants with Iran. Germany has therefore refused to participate in the naval force to escort merchant ships through Hormuz.

Germany is also in favor of the creation of a nuclear weapons-free zone in the Middle East. However, the country has some understanding that all countries in the region must agree on this before the zone is created.

As mentioned, Germany is one of the NATO countries that has US tactical nuclear weapons deployed on its territory as part of NATO’s security umbrella for Europe. There has been a great deal of political debate about the future of these weapons, but for now, Germany is agreeing on what they consider to be one of the main foundations for security and burden sharing within the NATO alliance.