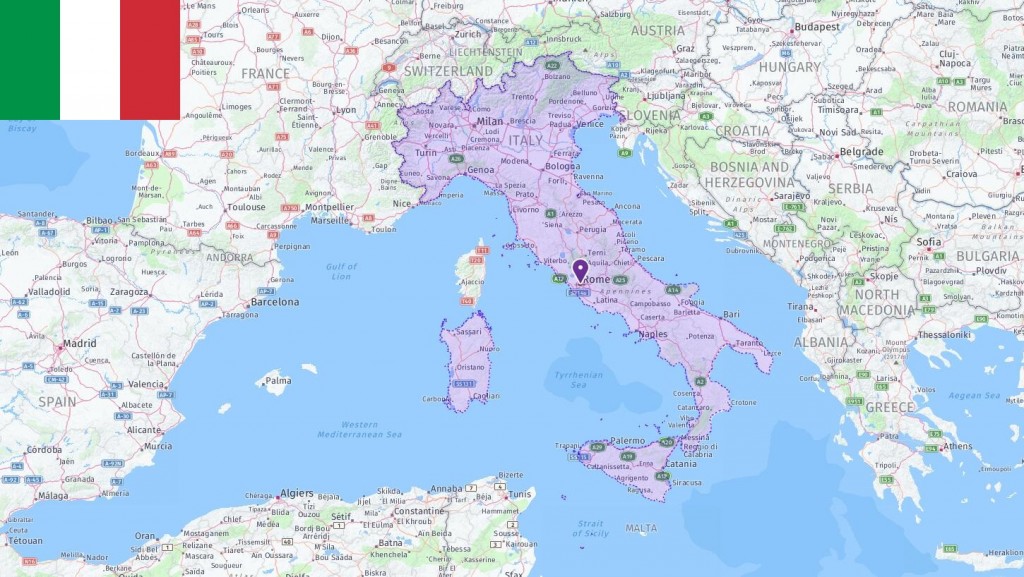 The most commonly used abbreviations about Italy are IT which stands for Italy and EUR which means Euro (Italy currency). In the following table, you can see all acronyms related to Italy, including abbreviations for airport, city, school, port, government, and etc. 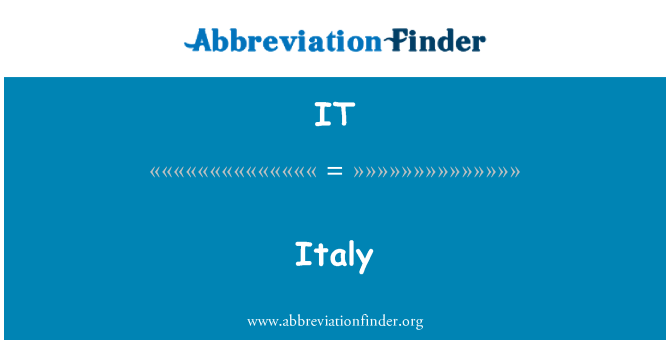 The outline of Italy is similar to a boot that extends into the Mediterranean. The country extends from the Alps in the middle of Europe to the south of the Mediterranean. The country has two major associated islands: Sardinia west of the mainland and Sicily, which are the southernmost points. Northern Italy’s most important area is the fertile Po plain, which lies between the mountain ranges of the Alps and the Apennines. In Sicily lies the 3330 meter high volcano Etna, which erupts almost every year.

Italy has a varied climate. The northern parts are temperate, while the southern parts have a Mediterranean climate, with dry and hot summer, and mild and rainy winter. There is less and less annual rainfall the farther south you come in Italy. In winter, there can be snow and minus degrees north of the country, while Sicily has 20 degrees of heat.

In ancient times, Italy was home to Europe’s largest empire. The Etruscans gathered the small communities around the River Tiber into a city state around 600 years BC. Around the year 500 the city’s inhabitants rebelled against the Etrurian Kingdom, forming the Roman Republic. This republic grew over the years and became the Roman Empire. At its largest, the empire stretched from England in the west, down over the entire Mediterranean, to the Caspian Sea in the east.

After the fall of the Roman Empire in the 400s, the country was thrown into chaos and was occupied and plundered repeatedly. Throughout the 1300s, city states such as Florence and Venice flourished and became important centers of commerce and science. Several attempts to unify the country after the Napoleonic wars of the late 18th century ended in revolution in 1848, and in 1861 Italy became an independent state.

In the 20th century, Italy experienced political turmoil and several power struggles. The country took an active part in both world wars, leading to great suffering for the civilian population. With the help of US support, the Marshall Aid, the Italian economy could recover after World War II. Italy chose early to join Western cooperation and joined NATO in 1949. In the post-war period Italy has been a major country in international politics and has played a crucial role in the European Union (EU). In the 1970s, the country experienced several acts of terrorism linked to major political conflicts between the communists and the right-wing. The economy has been more stable than the political landscape.

In 1992, a huge political scandal was revealed. People from all parties, both the government and the opposition were accused of corruption. This development greatly contributed to Italians having little confidence in politicians and the political system. In 1994, Silvo Berlusconi ran for election for the first time. He had founded his own party Forza Italia, and opted for liberalist values: privatization, cuts in public spending and less taxes. The party won the election and formed a government, but the cooperation within the party exploded after half a year. In addition, Berlusconi himself was investigated for corruption.

Berlusconi’s period as prime minister in the 2000s is characterized by the concentration of economic, political and media power in the prime minister’s hands. Berlusconi became one of Italy’s richest men, with a foundation in finance, real estate and industrial activities. There were strong protests when Berlusconi tried to pass a law that ensured that he could not be prosecuted. The immunity decision was later repealed by the Constitutional Court. Berlusconi became the first reigning prime minister to meet as charged in a lawsuit. It ended with acquittal, while a close party trap was convicted of cooperating with the mafia.

Italy was transformed into a republic after World War II. The president has wide powers, and appoints the prime minister and the government. Italian politics has for many years been dominated by the tense relationship between the rich areas in the north and the poor in the south. The differences between the regions have led to political instability. New governments have been appointed almost annually since World War II. Despite this, Christian Democrats have retained government power for most of these years. This has been achieved by forming governments together with other parties, both from the right and left. In recent years, parties on the right have been growing, and several times have had government power. The right-hand side’s progress is due to increased xenophobia, immigration and dissatisfaction with the economic development.

Family ties are strong in Italy, especially in the south, still several generations live under the same roof. Women are only a small part of the labor market. Their role is still fairly traditional, with care of children, family and home. Italy has very low birth rates.

Amnesty International has repeatedly pointed out that immigrant labor is being used in an unacceptable way in Italy, including lower wages, or no wages at all. Racism is a widespread problem. Italy also has the highest proportion of people in their 20s without education or jobs, across the EU.

In recent years, Italy in particular has seen a sharp increase in refugee flows from North Africa. Every year, thousands of refugees arrive by boat to the island of Lampedusa, which belongs to Italy. So far, Italy has been responsible for the rescue efforts alone. Since the EU has joint border control, this is a responsibility Italian authorities have felt sorry for standing alone. This applies both to the dangerous road to Europe and how Europe then accepts the refugees and processes their applications for asylum and residence. The Italian interior minister has clearly stated that if no other countries are set up, Italy will only allow the refugees to travel to the rest of Europe. This is despite the fact that it will be contrary to the Dublin agreement, which states that the refugees must be in the first country to arrive until the asylum application has been processed.

Today, Italy has an advanced and varied industry, and is one of the world’s largest economies. The country is industrialized, but almost all industry is located in Northern Italy. Northern Italy accounts for 60% of the country’s gross domestic product (GDP). Unemployment is high, but it is significantly higher in the south than in the north. As in many other countries, youth unemployment is a major problem, and here too, southern Italy is hit harder.

The main export markets for Italy are Germany and France, and the main export goods are machinery, appliances, vehicles, clothing, shoes, leather goods and agricultural products. The service industries account for around 70% of the gross domestic product, and the tourism sector plays a very important role for the Italian economy.

Italy is part of the euro cooperation. At the turn of the millennium, Italy had the lowest economic growth and the highest government debt of all euro zone countries. Unemployment was high, and rising life expectancy, low birth rates and large pensions increased public spending. Cuts, proposals for pension reform and proposals for working environment laws triggered major demonstrations. Italy was close to being penalized several times by the EU for its budget deficits. In 2005, the EU requirement was softened, but the need for austerity and change was still great.

In the spring of 2010, Italy was in the group of countries that, with their economic setbacks, were considered a threat to the euro cooperation, the so-called Pigs countries, Portugal, Italy, Iceland, Greece (Greece) and Spain. The EU again made a number of demands for austerity.

Italy may have been a major power in the Mediterranean, but corruption, mafia rule and political disagreements have hampered developments in the country. The high government debt contributed to the euro crisis, and Italy had to make major savings.

Italy and the United States share a lot of history and values. There are many people in the United States with Italian roots and Italians have had a great influence in many places in the United States. Italy has been a strong advocate for peace and democratization of conflict-ridden areas of the world and is one of the major contributors to peacekeeping operations.

Italy has had a relatively good relationship with Russia, especially when Silvio Berlusconi was president. The relationship, on the other hand, has been somewhat strained after Russia annexed Crimea.

Italy has stated that they fear the spread of extremism and terrorism and will join the fight against these forces. Italy is one of the countries that receives the most refugees. Several escape routes across the Mediterranean lead to Italy. It is therefore in Italy’s interest that the situation stabilizes.

Italy will normally vote with the US, France and the United Kingdom in the Security Council. Everyone is close allies. Italy is committed to consensus, which means that all countries in the Security Council must agree. They will probably therefore try to work for a resolution that all countries can support. In a statement to the Security Council in March 2017, Italy emphasized that there is no military solution to the conflict in Yemen. Political agreement is the only way to go. We can therefore imagine that they are skeptical of the intervention of the Saudi Arabian coalition, which is supported by the United States and the United Kingdom.