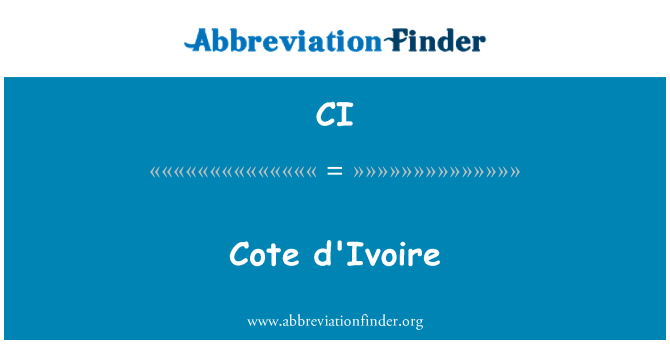 Ivory Coast is about as large as Norway in area. The coast to the south consists of cliffs, long sandbanks and shallow lagoons. Otherwise, the landscape is flat. Four rivers flow from north to south, making the soil fertile, especially in the east. The Ivory Coast has two rainy periods annually in the south and one in the north. The climate is generally warm with high humidity. The climate has become warmer and the rainfall more unpredictable over the last few decades.

In the interior of the country was a belt of rainforest, but since the Ivory Coast has long been a major exporter of tropical timber, deforestation has been great. The industry has caused most of the rain forest in the southern part of the country to be cut down. At the end of the eighties, forestry and protection were started, but the harvesting continued in the northern part of the country, beyond the control of the authorities.

Archaeological finds indicate that the area has been inhabited since 10,000 years BCE. Today’s population comes from the immigration from the Ghanaian around 1200. Immigration from the north around the same time led to Islam getting a foothold in the northern areas. In the south, several states were established, the most important being the Agni and Abrong kingdoms. The Ivory Coast was subjugated to France as a colony in 1893, but opposition to the colonial lords was strong. It was not until 1917 that the French managed to subvert the entire area, and they managed the country until it gained independence in 1960.

The country experienced financial prosperity after the liberation. It disappeared for various reasons during the 1980s and 1990s, and led to strong contradictions between different peoples. Félix Houphouët-Boigny led the country from independence until he died in 1993. In the political power struggle that followed, several politicians exploited nationalist currents to increase their popularity. This increased the ethnic and religious contradictions. In 2002, a civil war broke outand the land was divided in two. In the south, the president ruled, while the northern part was controlled by rebels. Thousands of people were killed and hundreds of thousands were fled before a peace treaty was signed in 2007. New turmoil erupted around the 2010 presidential election when incumbent President Gbagbo refused to step down. In 2011, he was forced out of power and brought before the International Criminal Court for gross human rights violations.

The president is the country’s head of state and can be re-elected once. The President appoints the Government and the Prime Minister, who is accountable to him/her. The legislative power lies with the National Assembly. The government after the unrest in 2010-11 has focused on rebuilding the economy.

The Ivory Coast has problems with corruption in the judiciary and politics, human trafficking and high crime in cities. Wide access to weapons exacerbates the situation. Both parties in the civil war were guilty of gross human rights violations, such as executions, torture, rape and child soldiers’ recruitment – which have often become street children. The country has been criticized for the late settlement of human rights violations.

The UN was present in the country between 2003 and 2017, with peace operations and peace negotiations during the Civil War, and with assistance for post-war reconstruction.

Agriculture is the Ivory Coast’s most important industry, and the country is the world’s largest exporter of cocoa. During the 2000s, the country became an oil and gas exporter, in addition to exporting some gold and diamonds. The Ivory Coast has a well-developed industry that mainly processes the country’s raw materials. In other words, the Ivory Coast is rich in natural resources and has a great potential to develop its economy.

In the thirty years following the liberation in 1960, the Ivory Coast was one of Africa’s richest countries, but among other things the civil war caused economic growth to stop and the country weakened its position as a regional trading center. Since 2012, the economy has started to grow again, and the inhabitants’ income is relatively high compared to other countries in the region.

Although the economy is growing, many are living in deep poverty, and there are major regional differences. Unemployment is high, and in the slums in cities and the north of the country, many people suffer from malnutrition. Widespread smuggling causes the state to lose important revenue. The Ivory Coast is struggling with large foreign debt despite parts of the debt being erased.

The UN Association is offering a role-playing game for the 2019-20 school year in which students will try to resolve a conflict in the Security Council (Iran and the nuclear issue). Ivory Coast is a member of the Security Council, and the sections that follow are information related to this game.

In foreign policy, the Ivory Coast has close ties to the West, and especially to the former colonial power France. The close cooperation with France is both political, military and economic. In recent years, China has invested in several major economic projects in the Ivory Coast, and has therefore become an important trading partner.

The African countries often seek cooperation between the Security Council.

Like most other countries in the Security Council, the Ivory Coast is concerned that the nuclear deal with Iran will be destroyed as a result of the US withdrawal. The Ivory Coast is also afraid of the consequences of a possible armed conflict between the US and Iran, and of the conflict affecting shipping and oil transport through the Persian Gulf.

In a post on nuclear disarmament in the UN Security Council in April 2019, the Ivory Coast commended the International Atomic Energy Agency (IAEA) for its thorough controls over Iran’s nuclear program. The Ivory Coast also strongly supported the Non-Proliferation Agreement, which will conduct its next conference in New York in May 2020. At this conference, progress must be made in terms of non-proliferation of nuclear weapons, disarmament among nuclear weapons states and continued protection of the right to use nuclear technology for peaceful purposes.

As a state without nuclear weapons but in need of more civil nuclear technology, the Ivory Coast emphasized that the country needs more assistance both to improve medical services to the population and to protect agricultural crops from pests.

In its post to the Security Council, the Ivory Coast also mentioned that it would benefit peace if more nuclear-free zones were created around the world. The country is itself a member of the African nuclear-free zone, which has existed since the 1990s. In this context, the need to create a new nuclear-free zone in the Middle East was specifically mentioned. In its speech, the country also supported the proposal to enter into an international agreement prohibiting the enrichment of uranium for weapons purposes.

The Ivory Coast was one of the first countries to sign the UN Prohibition Treaty on nuclear weapons when it was adopted in 2017. This means that, like South Africa, the country is particularly concerned about the humanitarian consequences of the possible use of nuclear weapons, and wants to create a moral prohibition against such weapons.