What is the abbreviation for Maine state? Maine is in the far northeast of the United States. The state borders the Canadian provinces of New Brunswick and Quebec in the northeast and northwest, the US state of New Hampshire in the southwest and the Atlantic in the southeast. West Quoddy Head is the easternmost location on the mainland of the entire United States.

The Maine area was originally French territory and its name probably derives from the landscape of the same name in France, but the abbreviation of “mainland” is also possible. Maine became the 23rd state of the United States in 1820. The least populated state east of the Mississippi is also called “Pine Tree State” because 90% of its area is forested – mostly with pine trees. The state covers an area of ​​91,645 km² – with around 1.4 million inhabitants. The capital has been Augusta since 1831 – with only around 24,000 inhabitants.

The main agricultural products are poultry, eggs, potatoes, blueberries, apples and numerous dairy products. Fish and the famous Maine lobsters, considered the best in the world. The Maine industry mainly produces and processes paper, wood, furniture, electronics, food, leather and textiles. There are numerous lighthouses, sandy beaches, tranquil fishing villages and thousands of smaller and larger islands along the rough rocky coast of Maine. Inland there are many lakes, rivers, forests and mountains.

Augusta
Augusta is the capital of Maine and, with approximately 18,500 inhabitants, is one of the three smallest capitals of all states in the United States. Augusta received city rights in 1797. Augusta is located on the Kennebec River in Kennebec County in southeastern Maine. It is the easternmost capital of the United States.  The State University of Maine, founded in 1965, is located in Augusta as well as the Maine State House. The Botanical Garden and the State Museum Maine are worth seeing.

Portland
With approximately 66,200 residents, Portland is the largest city in the state of Maine. It is a coastal city in southwest Maine and is located in Cumberland County.
Portland is best known for its historic waterfront at the mouth of the Fore River with its famous lighthouse, the Portland Head Light, and its artists’ district. It is also home to the state’s largest insurance companies and banks. The writer Stephen King is one of the city’s famous sons and daughters.

Brunswick
Brunswick is only 30 km from Portland and has approximately 21,200 inhabitants. Located at the waterfalls of Androscoggin, it was founded as a settlement in 1628 and in 1738 it received city rights. It received the name “Brunswick” in 1717 in honor of the House of Braunschweig. Bowsoin College, Bowdoin College Art Museum, MacMillan Arctic Museum and Naval Air Station Brunswick are located in Brunswick.

Lewiston / Auburn
The cities of Lewiston and Auburn are two of the five largest cities in Maine. Lewiston has approximately 41,600 residents, making it the second largest city in the state and Auburn approximately 25,300. Both cities are in County Androscoggin in southwest Maine. Because they are only separated by the Androcoggin cases, they are often perceived as one big city, abbreviated LA. Lewiston is home to Bates College and the University of southern Maine, as well as the famous Basilica of Saints Peter and Paul. Androscoggin County is the administrative center of Auburn.

The most commonly used abbreviations about Maine are ME which stands for Maine. In the following table, you can see all acronyms related to Maine, including abbreviations for airport, city, school, port, government, and etc. 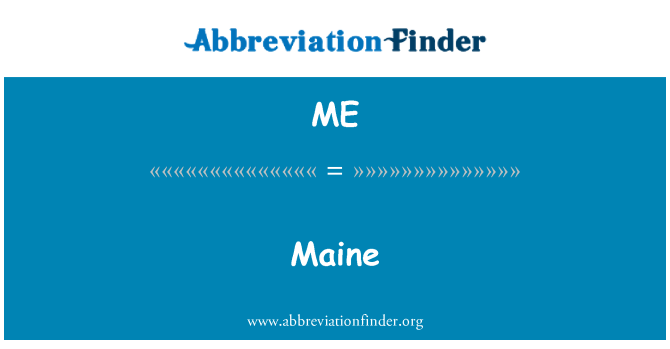