What is the abbreviation for Wyoming state? The US state of Wyoming is located in the northwest of the United States. Viewed clockwise, it borders the states of Montana, South Dakota, Nebraska, Colorado, Utah and Idaho. With a population of approximately 565,000, Wyoming is the smallest of the US states in terms of population. Wyoming covers an area of ​​253,348 km². The capital of Wyoming is the approximately 60,000 strong Cheyenne in the southeast of the state. Wyoming stretches from the west with the Great Plains to the east in the Rocky Mountains.

The name of the state of Wyoming comes from the language of the Algonkin Indians and means something like “Great Plains”. Until the end of the 19th century mainly Indians of different tribes lived here (e.g. Absarokee, Cheyenne; Lakota). Wyoming was accepted into the Union in 1890 as the 44th state. His constitution was the first in the world to grant women the right to vote. The state’s official nickname is “Equal State” and its motto is “Equal Rights.” However, the nicknames “Cowboy State” and “Big Wyoming” are also common.

Wyoming’s economy today is shaped by mining and above all by coal and not by cattle or sheep breeding as in the past. However, these industries still shape much of Wyoming’s culture today. Tourism mostly takes place in western Wyoming, i.e. in the Rocky Mountains. Wyoming’s sights are among the most famous in the United States, such as Yellowstone National Park with geysers, spectacular waterfalls and deep canyons. The film “Brokeback Mountain” by director Ang Lee from 2005 with Heath Ledger and Jake Gyllenhaal in the leading roles was a real shock for the extremely conservative Cowboy State. The film tells the love relationship between two male cowboys over a period of around 20 years.

Cheyenne
The city of Cheyenne has approximately 60,000 residents, making it the largest city in the state and the capital of Wyoming. The city was founded in 1867 as a Union Pacific Railroad station. The city was a meeting place for gunslingers and later an agricultural center. From 1890 Cheyenne became the capital of Wyoming. Even today, the city is known for cattle breeding and is also called cowboy capital. Wild west atmosphere can still arise here today, but in itself Cheyenne is not a tourist town.

Casper
The city of Casper has approximately 55,000 inhabitants, making it the second largest city in Wyoming after Cheyenne. The city is almost the center of the state and is known for its oil industry but also for cattle and sheep breeding. Because of the former, it was nicknamed “The Oil City”.

Gilette
The city of Gilette with its approximately 30,000 inhabitants is located in northeastern Wyoming. The city was founded in 1892 and named after the engineer Edward Gillette. The city’s nickname is “Energy Capital of the Nation” because there are large deposits of coal and oil in the region. In addition, methane gas is extracted from coal here.

Laramie
The city of Laramie has approximately 27,000 residents, making it the third largest city in Wyoming and located in the southwest of the state. The city was founded in the mid-19th century to support the construction work of the Union Pacific Railroad. Laramie is Wyoming’s educational center, if you will, because the only university in the state is the University of Wyoming. Laramie has more to offer, however. Since the city is bordered by the Snowy Range and Laramie Range, it is considered a particularly good place for outdoor activities.

Rock Springs
The city of Rock Springs has approximately 18,000 residents and is located in the southwest of the state of Wyoming. The city is considered a mining town and there are actually numerous coal and natural gas deposits in the area surrounding the city. On September 2, 1885 there were serious riots between Chinese and white miners in which at least 28 Chinese miners died. This incident is known as the Rock Springs massacre.

Sheridan
Although only 15,000 people live in Sheridan, the city in northern Wyoming is known as the regional center of coal. Sheridan used to be a center of cattle breeding, which you can still see in the city today. The city even profits from this and markets itself a center of the Wild West where it is still possible to feel the spirit of the past. The mix of architecture in the city, which ranges from the old Wild West style to Victorian buildings to modern buildings, is very interesting.

The most commonly used abbreviations about Wyoming are WY which stands for Wyoming. In the following table, you can see all acronyms related to Wyoming, including abbreviations for airport, city, school, port, government, and etc. 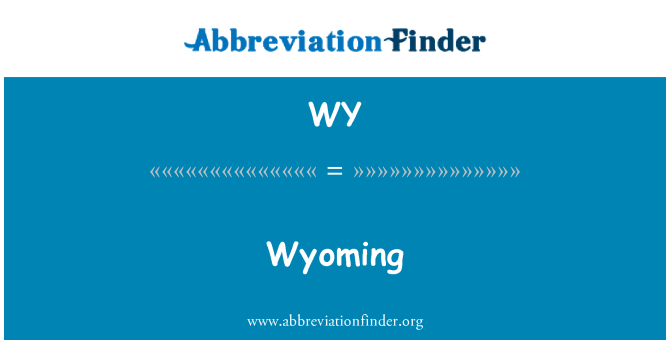