What is the abbreviation for Montana state? Montana is a state in the northwestern United States, in the Rocky Mountains, and is therefore one of the Mountain States. However, the eastern part of Montana is assigned to the northern part of the Great Plains. Montana borders Canada to the north, more precisely to the Canadian provinces of British Columbia, Alberta and Saskatchewan, to the east to the states of North Dakota and South Dakota, to the south to Wyoming, and to the west and southwest and Idaho. The name of the state is derived from the Latin word “montanus” for “mountainous”. The state’s nickname is ” The Treasure State”and its official state motto is” Oro y Plata “(gold and silver). This already shows the large deposits of mineral resources that the state has.

The state of Montana covers an area of ​​381,154 km² – in this respect the fourth largest state of the USA – with around 1 million inhabitants, the capital of Montana is Helena with only 28,000 inhabitants, and on November 8, 1889, Montana became the 41st state to join the Union. Nowadays Montana is a popular destination for tourists due to its charming, mountainous landscapes. Tourism is the fastest growing industry in Montana. Nevertheless, Montana’s economy today is mainly characterized by agriculture (livestock and cereal cultivation, mostly wheat), the mining sector (coal, copper, silver, gold, precious stones) and the extraction of oil and natural gas. Around the city of Sidney in particular, medium fracking oil has recently been extracted from the local oil shale.

The topography of Montana can basically be divided into east and west. The western part of Montana is located in the Rocky Mountains and there are over 100 mountain ranges, 77 of them in the Rocky Mountains alone. However, the eastern part of Montana belongs to the northern part of the Great Plains and is relatively flat, characterized by prairies, badlands and isolated smaller mountain ranges. In Montana there are a total of 7 Indian reservations, which are spread over 12 tribes, but about 63% of all descendants of the indigenous people do not live within reservations.

Most tourists are attracted to well-known attractions such as Yellowstone National Park (there are 3 of the 5 entrances in Montana), Glacier National Park, the source area of ​​the Missouri River, Flathead Lake and the Little Bighorn Battlefield National Monument. But this also means that numerous other attractions are waiting to be explored, visited and enjoyed. Furthermore, Montana with 15 very well developed ski areas is worth a visit in winter. The famous director David Lynch, the stuntman Evel Knievel and the professional cyclist Levi Leipheimer come from Montana. In 1876 there was a battle on the Little Bighorn River between the Indians led by Sitting Bull and Crazy Horse and the 7th US Cavalry Regiment commanded by General Custer. The fighting was one of the few major defeats by the US Army in the course of the Indian battles at the time.

Helena
Helena, the capital of Montana, has only about 28,000 inhabitants and is located in the western part of Montana. The city was founded in 1864 after gold finds. Nowadays, it offers some sights such as the State Capitol and the Cathedral of Saint Helena, as well as some other historical buildings. However, due to the size of the city, the same tourist offer as in other state capitals is not to be expected.

Bozeman
The city of Bozeman is located in the southwest of Montana and has approximately 38,000 inhabitants. This makes Bozeman the fourth largest city in the state of Montana. The city is named after the founder of the former trade route “Bozeman Trail”, John M. Bozeman. The city was founded in 1864 and Bozeman has had city status since 1883. Bozeman lies at an altitude of approximately 1,468 m and is surrounded by the Bridger Mountains, the Tobacco Root Mountains, the Big Belt Mountains, the Horseshoe Hills, the Hyalite Peaks, the Gallatin Range and the Madison Range. This results in some tempting activities. The city of Bozeman can also be seen as a university city, since Montana State University is located here. The city is an excellent starting point for tours in the Yellowstone National Park. But there is also a lot to experience in the city, such as the Museum of the Rockies, and the Bridger Bowl Ski Area, Big Sky Resort and Moonlight Basin as well as the Hyalite Canyon are nearby.

Butte
The city of Butte is located in the southwest of Montana and has approximately 34,000 inhabitants. Butte emerged as the mining settlement of the Anaconda Copper Mine at the end of the 19th century. The city’s population grew after new discoveries and in 1911 Butte was the largest city in Montana. Due to the numerous resource finds, Butte quickly got the nickname “the Richest Hill on Earth”. Today, the city is suffering from the end of resource depletion, but tourism has developed in recent years. So the city offers something historically interested, such as the Berkeley Pit or the Dumas Brothel. Some of the place Butte should already be known, because here the film “Don’t Come Knocking” by Wim Wenders was shot in 2005.

Billings
The city of Billings has approximately 104,000 inhabitants and is located in the south of Montana, near the border with the state of Wyoming. Billings is by far the largest city in Montana, which is currently growing strongly due to its strong economy. The city was founded in 1882 for the workers of the Northern Pacific Railway Company. For tourists, Billings is not just because of the attractions in the city such as ZooMontana or Yellowstone Art Museum, but also because of the nearby attractions such as the Pompeys Pillar National Monument, the Pictograph Cave, the Little Bighorn Battlefield National Monument, the Bighorn Canyon National Recreation Area. The Beartooth Highway also connects the city with the Yellowstone National Park.

Great Falls
The city of Great Falls has approximately 58,000 inhabitants and is located in the center of Montana and is the third largest city in the state. The city was founded in 1883 and was the largest city in Montana from 1950 to 1970. The name comes from the waterfalls, Great Falls, which are formed on the outskirts of the Missouri River. Here the water drops about 150 m over several rapids. The city offers a good starting point for tours to Glacier National Park, Yellowstone National Park or Grand Tetons National Park.

Missoula
The city of Missoula is located in the west of Montana and has approximately 66,000 inhabitants. This makes Missoula the second largest city in Montana after Billings. The city was founded in 1860, however as Hellgate Trading Post Station. The city is crossed by the Clark Fork River, Bitterroot River and Blackfoot River and is surrounded by mountain ranges. Missoula, although it is the second largest city in Montana, is a tip for all nature lovers. The journey time to Glacier National Park is approximately 3 hours.

The most commonly used abbreviations about Montana are MT which stands for Montana. In the following table, you can see all acronyms related to Montana, including abbreviations for airport, city, school, port, government, and etc. 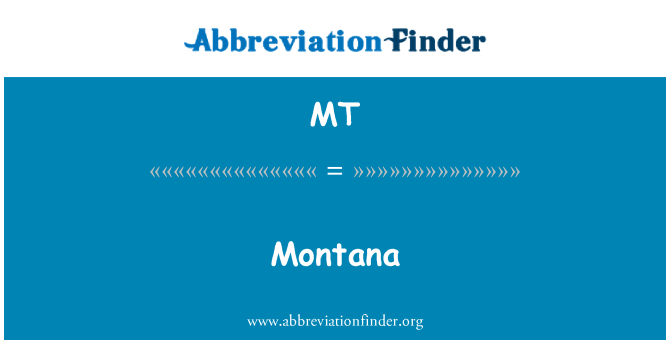