What does GRC mean?

Are you looking for the meanings of GRC? On the following image, you can see major definitions of GRC. If you want, you can also download image file to print, or you can share it with your friend via Facebook, Twitter, Pinterest, Google, etc. To see all meanings of GRC, please scroll down. The full list of definitions is shown in the table below in alphabetical order.

The following image presents the most commonly used meanings of GRC. You can down the image file in PNG format for offline use or send it to your friends by email. If you are a webmaster of non-commercial website, please feel free to publish the image of GRC definitions on your website. 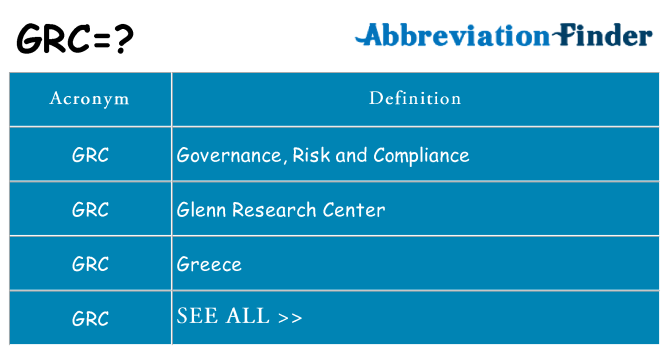 All Definitions of GRC

As mentioned above, you will see all meanings of GRC in the following table. Please know that all definitions are listed in alphabetical order. You can click links on the right to see detailed information of each definition, including definitions in English and your local language.

What does GRC stand for in text

In sum, GRC is an acronym or abbreviation word that is defined in simple language. This page illustrates how GRC is used in messaging and chat forums, in addition to social networking software like VK, Instagram, Whatsapp, and Snapchat. From the table above, you can view all meanings of GRC: some are educational terms, the other are medical terms, and even computer terms. If you know of another definition of GRC, please contact us. We will include it during next update of our database. Please be informed that some of our acronyms and their definitions are created by our visitors. Therefore, your suggestion of new acronyms is highly welcome! As a return, we have translated the acronym of GRC to Spanish, French, Chinese, Portuguese, Russian, etc. You can further scroll down and click the language menu to find meanings of GRC in other 42 languages.