What is the abbreviation for Idaho state? The US state of Idaho is located in the northwest of the USA and borders on the states of Montana, Wyoming, Utah, Nevada, Oregon and Washington. The name of the state is probably derived from the Indian word for “gem of the mountains” (Ee-dah-hoe). The state’s nickname is “Gem State” and its motto is “Esto perpetua” (it should last forever).

The federal stat covers an area of ​​216.632 km² – with only about 1.58 million inhabitants. The state capital is Boise with approximately 205,000 residents. The area was explored by the Lewis and Clark Expedition from 1805, and from 1866 the population increased due to gold discoveries. Idaho became the 43rd state of the United States on July 3rd, 1890. In agriculture, mainly potatoes, sugar beets, wheat and barley are grown. Industrial goods are primarily wood products, machinery, computer hardware, chemical products, paper products, silver and other mineral resources. Another important industry is tourism. Idaho is located in the Rocky Mountains and is known for its special landscape.

Boise
Boise is the largest city in the state of Idaho and its capital with approximately 205,000 inhabitants. In fact, more than 600,000 people live in the metropolitan area of ​​the city. The city is located in southwest Idaho on the banks of the Boise River. Boise was founded in 1863, and in 1866 the city became the capital of the Idaho Territory. Today Boise is the undisputed center of the state. In addition to numerous museums and theaters, Boise is also known for a large Basque community. About 15,000 Basques live here.

Coeur d’Alene
The city of Coeur d’Alene has approximately 45,000 inhabitants and is located in the north of Idaho. The city is located on Lake Coeur d’Alene and is therefore a popular holiday area – often only known by the abbreviation CDA. The city is particularly popular with golfers. The Coeur d’Alene Resort Golf Course is considered one of the most beautiful golf courses in the world. For everyone looking for fun and relaxation in nature, Coeur d’Alene is the right place to go.

Idaho Falls
The city has approximately 56,000 inhabitants, is located in the southeast of the state and is the fourth largest city in Idaho. About 130,000 people live in the city’s metropolitan area, making Idaho Falls the largest city in eastern Idaho. It lies on the banks of the Snake River and was founded in 1864. It is also characterized by the surrounding agriculture and serves as a starting point for many visitors to the Yellowstone and Grand Teton National Park.

Moscow
The city of Moscow with approximately 24,000 inhabitants is located in the north of Idaho near the border with the state of Washington. Moscow was founded in 1871. The name of the city is not necessarily based on Russian Moscow, but on the meaning of the word, which stands for “brotherly love”. It is a regional center and the economy is based on agriculture. However, there are numerous forest protection areas around the city that invite you to go hiking.

Pocatello
Pocatello, with approximately 51,000 residents, is located in southeastern Idaho, making it the fifth largest city in the state. Pocatello was once an important junction of the railway lines. Not much of that can be noticed today. Nevertheless, the city offers something to its visitors. For example, the historic city center and the old railway facilities are impressive. The city is named after the Indian chief Pocatello, who allowed the construction of the railway.

Sandpoint
Sandpoint, with only 7,000 inhabitants, is located in the far north of the state of Idaho. Although the city is quite small, it is very popular with tourists due to the Lake Pend Oreille. In addition to a mountainous and forested environment that reminds of the Pacific Northwest, there are also beautiful sandy beaches on the shores of the lake. Incidentally, the politician Sarah Palin was born in Sandpoint.

Stanley
has only about 100 inhabitants and is centrally located in Idaho in the Rocky Mountains on the Salmon River. Stanley is considered the perfect Rocky Mountains village. Despite Stanley’s size, there is a lot to do here in wonderful nature. For example hiking, mountain biking, fishing or rafting.

Twin Falls
The town of Twin Falls has approximately 42,000 inhabitants and was founded in 1904. Twin Falls is located in southern Idaho near the state border with Nevada and Utah. Twin Falls is a popular destination because it is home to the Craters of the Moon National Monument and the famous Shoshone Falls. But the Snake River Canyon is also very worth seeing.

The most commonly used abbreviations about Idaho are ID which stands for Idaho. In the following table, you can see all acronyms related to Idaho, including abbreviations for airport, city, school, port, government, and etc. 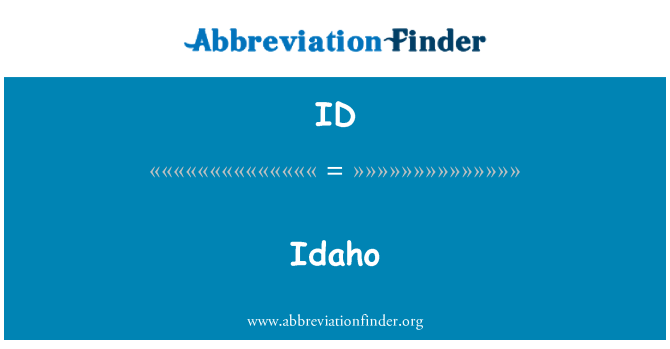