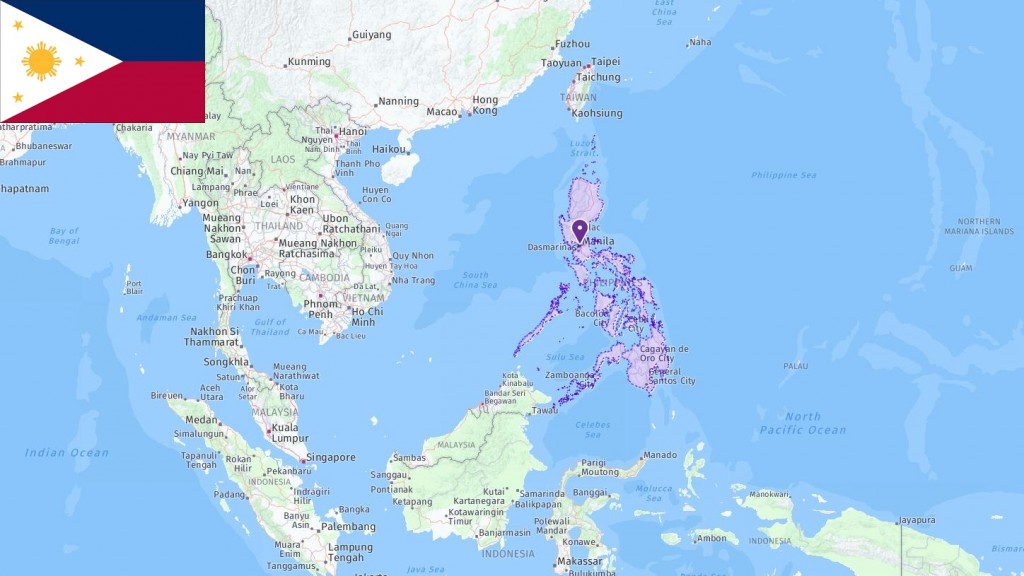 The most commonly used abbreviations about Philippines are PH which stands for Philippines and PHP which means Peso (Philippines currency). In the following table, you can see all acronyms related to Philippines, including abbreviations for airport, city, school, port, government, and etc. 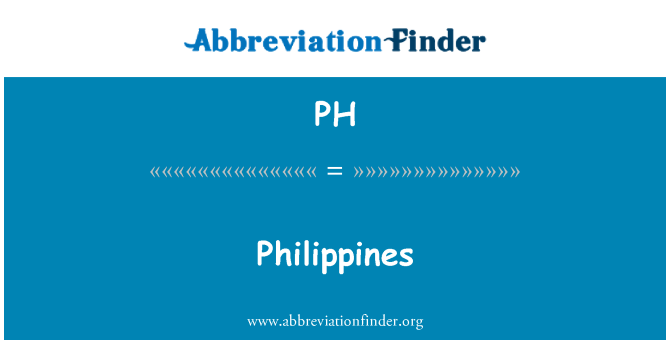 The Philippines is an archipelago of more than 7,100 islands. Most of the land mass on the largest islands consists of mountain areas and plateaus, with few lowland areas. The islands have more than 20 active volcanoes, and are located in the middle of the typhoon belt, which covers the entire western part of the Pacific. In addition to severe tropical storms, the islands are often affected by natural disasters such as earthquakes and volcanic eruptions.

The climate is tropical, with extremely high humidity and high temperatures throughout the year. Monsoons affect the rainfall: in the period from June to November there is rainy season with constant wind from the west, the rest of the year it is dry and cool with wind from the east.

The Philippines is struggling with many of the environmental problems affecting poor countries around the world: deforestation, lack of clean drinking water and high air pollution. In addition, more than half of the coral reefs of the islands are damaged or damaged by spills and fisheries. The ocean surrounding the islands probably has the largest marine species diversity in the world, and the fish and coral species that live here are threatened by environmental problems.

The islands that are today the Philippines were originally settled by Australian-Melanesian peoples via a land bridge several thousand years ago. From the 8th century the islands had cultural and economic contact with China in particular, in addition to Japan, Malaysia and Indonesia. Muslim traders, and eventually also missionaries, converted many Filipinos to Islam in the 13th century.

The first western contact with the Philippines came when explorer Ferdinand Magellan visited the islands in 1521. Spain colonized the islands in the 16th century, and then ruled the Philippines for more than 300 years. The Spaniards converted the population to the Catholic Church, built roads and simple industry, and gave the islands a Latin mark that is still noticeable. The Spanish government lasted until 1898, when the United States took over after the Spanish-American war and a brief war against the residents.

The Philippines was an American colony until World War II, when the islands were occupied by Japan, before the country became an independent state in 1946. The years after independence were marked by chaos and political turmoil. In 1965, Ferdinand Marcos came to power, ruling the country in an increasingly dictatorial manner until he was deposed during a coup in 1986.

The Philippines is a presidential republic where the president is both head of state and government. The President can only sit for one six-year term. In the Philippines, political parties are built around strong individual politicians, rather than the parties being strong organizations. It is quite common for politicians to change parties by electoral defeat, and parties are often formed and dissolved. Politics is now more stable than ever since independence, despite coup attempts and other political crises on a regular basis.

For more than 30 years, the authorities have been fighting against a communist guerrilla army in the north, and Muslim guerrilla separatists in the south, and all parties to the conflicts have committed grave human rights violations. The Philippines is today a divided society, where a small upper class both governs the country and sits on most of the income, while large sections of the population live in poverty. In addition, incumbent President Duterte has waged a war on drugs that has led to more than 22,000 extrajudicial killings since 2016.

In the 1960s, the Philippines was the second richest country in Asia, after Japan. Two decades under the dictator Marcos’ rule greatly contributed to the country not developing further with the other Southeast Asian countries. After a good period of growth in the 1990s, the country was hit by the Asian financial crisis in 1997, and only in recent years has the Philippines experienced steady economic growth. However, the country is very dependent on foreign loans.

Agriculture, fishing and forestry have long been the most important sectors of the country’s economy. Now the service sector and the manufacturing industry are more important. Outsourcing, for example, foreign IT companies moving their customer support and development to the Philippines, is becoming a more and more important part of the Philippines economy.

The main export goods are electrical and electronic products. Increased privatization of companies that, under Marcos’ rule, was state-owned has contributed to increased investment from abroad. The country’s most important trading partners are China, Japan and the United States. Nearly 10 percent of the country’s gross domestic product (GDP) is money sent home from Filipinos working abroad (2013).