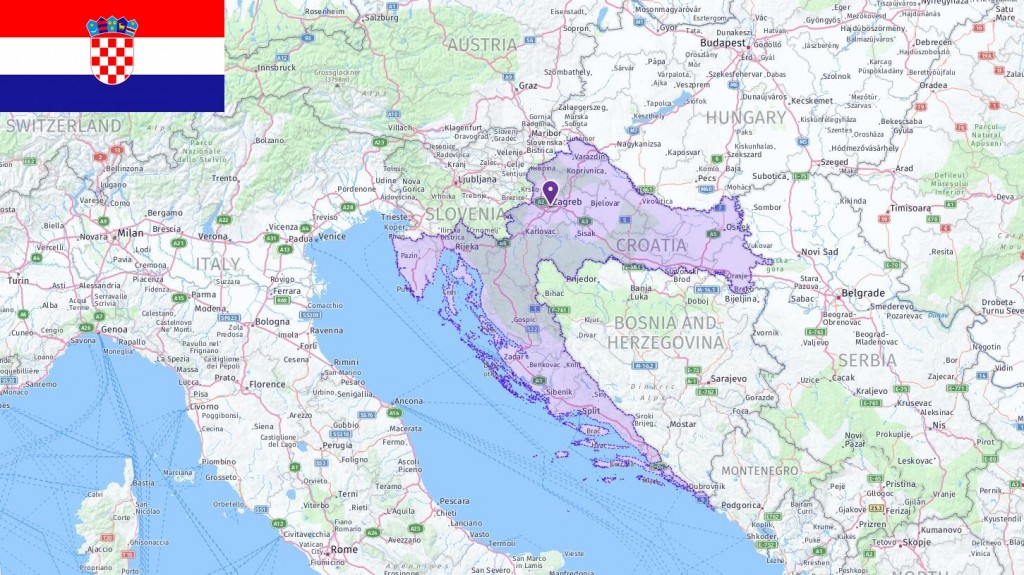 The most commonly used abbreviations about Croatia are HR which stands for Croatia and HRK which means Kuna (Croatia currency). In the following table, you can see all acronyms related to Croatia, including abbreviations for airport, city, school, port, government, and etc. 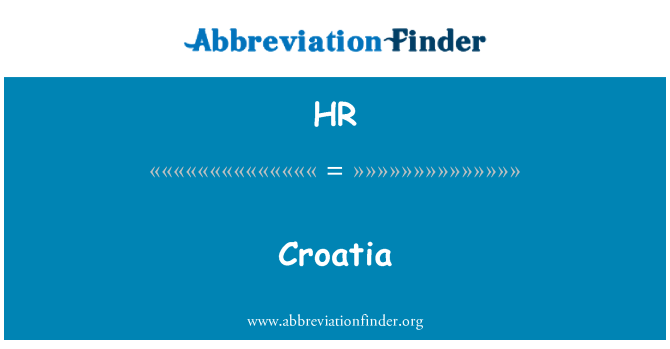 Croatia is located in the Balkan region and includes the landscapes of Croatia, Slavonia, Dalmatio and southern Istria. To the west, the country has a long coast towards the Adriatic, with around 1185 islands. The inland landscape can be divided into two types of country; A middle part with hills and mountains and a northeastern part which is lower and has a landscape suitable for agriculture.

Most of Croatia has an inland climate, with hot summer and cold, snowy winter. The coastal areas are characterized by Mediterranean climate with mild and humid winter and warm, sunny summer. The rainfall is evenly distributed throughout the year, it rains more on the coast than inland.

Croatia has been populated since the year 300 BCE. The area has been a kind of intersection for migrations from the east and the north, and a meeting point between western and eastern parts of the Roman Empire. The population composition in the country is characterized by its location. Croatia was subject to Hungarian, later Austrian-Hungarian rule from 1102 to 1918. In 1868 Croatia became its own kingdom, but only in 1918 did the Croatian parliament break with Austria-Hungary and declared Croatia independent. In the same year, the Kingdom of the Serbs, Croats and Slovenes, later called the Kingdom of Yugoslavia, was established. With the Kingdom of Yugoslavia, royal dictatorship was introduced. Serbs dominated the new state, and many Croats were oppressed. In 1941, Yugoslavia was occupied by Germany and Italy, and the independent state of Croatia was created. The new regime carried out a brutal ethnic cleansing of Jews, Serbs and Gypsies. Over 300,000 Serbs lost their lives.

In 1945, Croatia became one of the six sub-republics of dictator Josip Tito’s communist Yugoslavia. Tourism along the Adriatic earned Yugoslavia large revenue, and Croatia experienced economic recovery. The 1970s were characterized by broad popular opposition to Tito and the desire for independence, but the resistance movement was severely hampered. The Communists retained power until 1990 when the Croatian Democratic Union (HDZ) won the election. In 1991, Croatia declared its independence. Military from Serbia and Yugoslav forces intervened in the country and war broke out in the Serbian areas of Croatia. In 1992, Croatia’s independence was internationally recognized, but the war in the country did not end until 1995. The HDZ party, in the post-independence era, stood for a growing authoritarian and nationalist stance, and was accused of corruptionand human rights violations. In 2000, the Social Democratic Party came to power, and a democratic parliamentary system was introduced.

Croatia is a democratic and parliamentary republic. The president is the head of state and commander-in-chief of the country’s armed forces. The President is elected for a term of 5 years and may be elected twice. The president appoints the prime minister who governs the government. The policy is dominated by the Social Democratic Party SDP and the Conservative Party HDZ, which has now toned down its former nationalist stance.

The war in former Yugoslavia, with ethnic cleansing and large refugee flows, has made the country more ethnically unique than it used to be. Today, nine out of ten inhabitants are Croatians, and Serbs make up the second largest population group. Croatia has been pressured internationally to allow Serbs who fled during the war to return to their homes, this was, among other things, a requirement for joining the EU. More recently, Croatia has been criticized by human rights organizations for continuing to discriminate against Serbs and other minorities in the country.

The service sector represents two-thirds of Croatia’s gross domestic product and is an important sector for the country’s economy. The tourism industry has grown sharply since 2000, and in addition to agriculture and forestry is one of the most important trade routes in the country. About a fifth of the jobs in Croatia are in the tourism industry, and about ten million foreign tourists visit the country every year.

Croatia was a relatively rich part of the former Yugoslavia, but the 1990s war brought economic decline to the country. At the same time as tourism to the country increased in the 2000s, there was a period of economic growth. The international financial crisis in 2008 hit the country hard and only in 2015 was the economy on the road to recovery again. In 2013, Croatia joined the EU, which has demanded privatization and more effective anti-corruption measures in the country. Many of the former state-owned companies have now been sold, but the process takes a long time.