Until recently, the most feasible options for listening to music was vinyl discs and cassette tapes. However, the Philips, in association with other companies, developed the Cd (Compact Disc) audio (with a sound quality excellent), and then, this type of media has become the most standard used for albums music. The CDs have also become the most efficient and cheap to data storage (CDs of this type are called CD-ROM). Just as example, thanks to CDs, the software industry has practically eliminated the distribution of programs on floppy disks. By such characteristics, the drives CD-ROM drive (the devices that read CDs) have become items indispensable on any computer. This article aims to show some details of these devices.

The connection of the drives of the CD-ROM to the computer is made through the the back of these devices. In it, there are entries for the source power (energy), to the cable of data (responsible for transmit the data from the CD to the computer) and the audio cable (which should be plugged into the sound card so that it is possible to play Audio CDs).

On the front of the drives CD-ROM, are the tray where the CD is placed, an input for headphones (not available in some devices) and usually 2 two buttons: Load/Eject and Play. Obviously, it is possible to find differences between the various models of drives CD-ROM, both on the front as on the back. For example, there are drives CD that have an infrared sensor to receive orders via are remote control.

The data cable of the drives of the CD-ROM should generally be connected to the IDE interface of the motherboard (the same one used by the HDs). For this feature, drives of this type have jumpers to choose the mode operation (Master or Slave). Typically, the HD that contains the system operating is as master and the CD-ROM is with the slave, but this depends on each computer.

There were some drives of CD-ROM that used the SCSI interface, just as there was devices that used proprietary interfaces, or an interface created by the manufacturer of the CD-ROM drive, and that was not compatible with other manufacturers. In this case, the connectors varied greatly.

Speed of drives of CD-ROM

An important point in the CD-ROMs is the speed. The higher the the speed of rotation of the disk, namely, the speed at which the CD spins, the greater is the rate of data transfer. The first drives were transferred data at a speed of 150 KB per second (KB/s). These, were called drives single-speed, or 1X. With the evolution of technology, have been released drives faster and faster. Today, you pay much less for a drive 56X, than a 1X, in 1993. To know the value of the rate of transfer from your CD-ROM drive, you simply multiply the speed of the drive (this information is present on the front of the unit) for 150. By example, if your drive is 52X, do 52 ×150 = 7800 KB/s. See the table below:

The first drives of CD-ROM is operated in a mode rotation called CLV (Constant Linear Velocity – Linear Velocity Constant). Its speed of rotation varied, with the goal of keeping a transfer rate constant, which was required for the playback of audio CDs. On the trails outside, there are more bits recorded that on the trails internal. To compensate for the difference, the disk want to rotate more quickly when operated on the trails built and more slowly when on the trails outside. The models of single-speed (1X), rotate the disk the 530 RPM (rotations per minute) on the trails internal and 200 RPM in a trails external. It is not difficult to make the disk rotate at speeds high, but the acceleration and deceleration required when the read head is moved along the disk, it was with that the access time to stay very long.

From the speed of 16X, the CD drives began to use a rotation mode called CAV (Constant Angular Velocity – Speed Angular Constant). Rather than spin the disk with variable speed so you get the same transfer rate, both on the trails external internal, drives CAV rotate the disk at a constant speed. The advantage of this process, it is an access time that is smaller, because the disk does not need to be accelerated/decelerated in accordance with the movements of the reading head. The disadvantage is that the highest transfer rate is only obtained on the trails outside. In the internal, this rate is approximately equal to the half of its value on the trails outside. Because of this, some manufacturers advertise the CD with a minimum and maximum speed. For example, minimum of 24X and a maximum of 52X.

The variation of the rate of transfer does not allow playback of audio CDs, since these must operate in CLV, with speed 1X. But this is not a problem because the drives, when you play back Audio CDs, automatically reduce its speed to 1X, mode CLV.

There are basically 4 types of CD drives. A – the only reads audio CDs – it is only used in stereo. The list below shows the types of media available:

The media (discs) are formed by several layers, as plastic, aluminum, gold, etc., which allows you to read, recording and re-recording of the bits on a disk with 650/700 MB capacity. You can find media from several manufacturers, prices, and colors such as green, silver, blue, golden, etc. It is worth mentioning that the color of the media only indicates what was the type of process used in its manufacture. The quality depends on price and manufacturer. 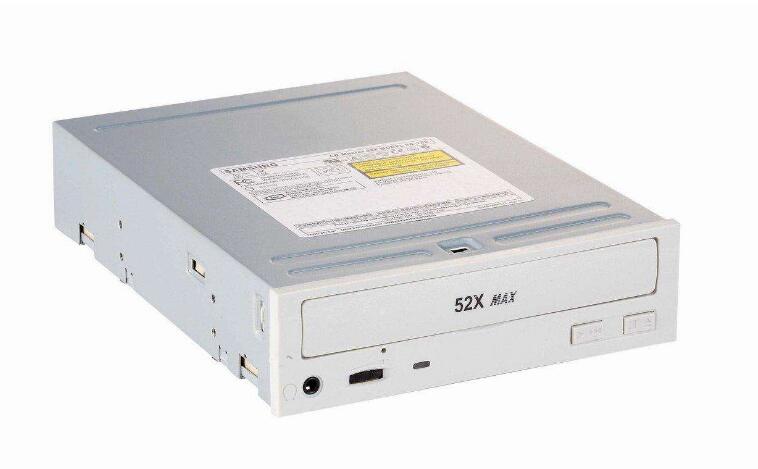