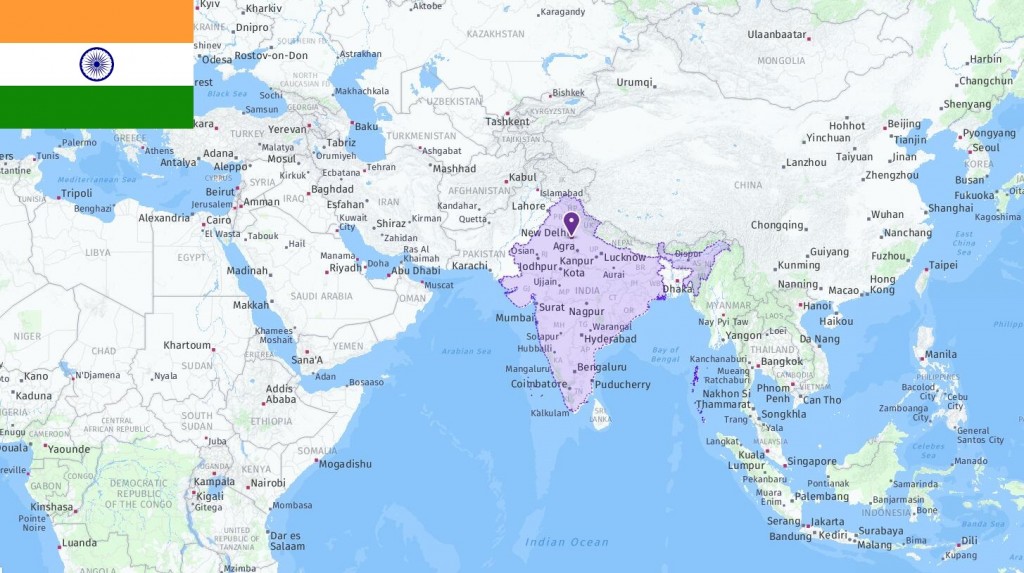 The most commonly used abbreviations about India are IN which stands for India and INR which means Indian rupee (India currency). In the following table, you can see all acronyms related to India, including abbreviations for airport, city, school, port, government, and etc. 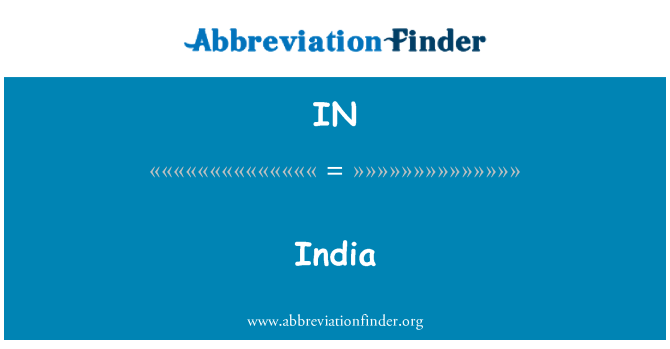 India is one of the world’s largest countries. Geographically, the country can be divided into three types of landscape: the Himalayan mountain range in the north, the northern Indian lowlands and the large Deccan Plateau in the south, which covers most of India. The Himalayas consist of parallel mountain ranges, between which lie fertile valleys such as the Kashmir Valley. The lowland countryside is very fertile, and many of the largest rivers flow here, such as the Ganges, Indus and Brahmaputra. About 57 per cent of the land is used for agriculture, the rest are forests, deserts, towns, pastures or fallow land.

The climate is very varied since the country is so large. The climate can be divided into two zones: a temperate zone in the north and a tropical zone in the south. In the north, the temperature varies between 15 degrees in January to 30-40 degrees in May, while it is more even in the south, between 25 and 35 degrees. India has extensive environmental problems, but greatly improved from 1995. A major problem is uncontrolled discharge of toxic waste from the growing industry, which has caused 70 percent of India’s surface water to be polluted.

One of history’s first high cultures evolved around the river Indus 3000 years BCE. The religion of the Indo-Europeans was the basis of Hinduism and has influenced India’s culture. Northern parts of the country were invaded by Arabs in the 7th century, and by Turks in the 11th century. Sultanates and dynasties established themselves, and the Mogul empire lasted from 1500-1700. The presence of Muslim rulers influenced the country’s culture, literature and architecture.

Towards the end of the 19th century, dissatisfaction with British rule increased. The Congress Party was established in 1885 and led the freedom struggle against the English, led by Mohanda’s Karamchand Gandhi. He was preoccupied with non-violent resistance, and millions of Indians protested with peaceful civil disobedience. Gandhi was a Hindu, and the Muslims feared Hindu domination when India was to become independent. Therefore, when the country gained independence in 1947, two states were established: Hindu India and Islamic Pakistan.

The division of British India was extremely bloody. Hundreds of thousands were killed and millions were displaced from their homes. Hindus moved from Pakistan to India, and Muslims from India to Pakistan. The conflict with Paktistan has marked India to a great extent since the split.

India is often called the world’s largest democracy. The country is a federation where states can decide on areas such as schools, hospitals, public transport and agriculture. The central government controls foreign policy, defense, development planning and currency. The president of the country is the head of state, but the real power lies with the government with the prime minister at the forefront. Quotation schemes have been introduced to get women and people from lower castes to parliament. There are many political parties in India, but the Social Democratic Congress Party has ruled most of the time after independence. Since 2014, Narendra Modi from a Hindu nationalist party has been prime minister.

India has a growing middle class, but the differences are huge and a large part of the population lives in poverty. The worst is in the slums in the big cities and in the countryside, where nearly a quarter of all Indians live. The Hindu caste system, which divides people into a hierarchy, still characterizes society. In recent years, the country has experienced increased corruption, riots and acts of terrorism. India is an atomic power and has long been in conflict with Pakistan for control over the Kashmir mountain range.

India is today one of the world’s largest economies, and Asia’s third largest after China and Japan. Strong growth in production technology, the IT sector and the increase in foreign investment have led the country to have one of the fastest growing economies in the world since 2000. Nevertheless, India is among the world’s poorest countries if it distributes gross domestic product (GDP) to all its citizens, because it is so populous. Economic growth has not been distributed among all citizens, and there is considerable economic inequality between those included and excluded.

India has developed a nuclear power industry, is a major weapons manufacturer and builds its own spaceships. The country is also one of the big ones in the IT industry. Important export goods are traditional goods such as clothing, textiles, diamonds and jewelry, but also oil products and minerals, machinery, chemicals and medicines. Its main trading partners are China, the United Arab Emirates, the United States and the EU.