What is the abbreviation for Nevada state? Nevada – “The Silver State” – is located in the western United States. Its name comes from the Spanish word for “snow-covered” and refers to the snow-capped peaks of the Sierra Nevada. In 1864 Nevada became the 36th state to join the Union. In Nevada There are rugged, snow-capped mountains, green valleys and sandy deserts. The state covers an area of ​​286,351 km² – with approximately 2.7 million inhabitants. The capital is Carson City in the western part of the state near the California border.

Located in Nevada are the world-famous player city of Las Vegas as well as the also very well-known Hoover Dam and the associated reservoir, Lake Mead. In addition, the largest hunting fair in the United States takes place here in Reno, which is visited by hunting enthusiasts from all over the world. Nevada borders Oregon and Idaho to the north, California to the west, Arizona to the southeast, and Utah to the east. The border with Arizona is largely formed by the Colorado River – the Hoover Dam is also located on this border. In Nevada, the 3,500 km² Nevada National Security Site – a restricted area north of Las Vegas within the Nellis Range – also hosted more than 700 US nuclear and underground tests.

Boulder City
The city of Boulder City is located on the border of Nevada and Arizona and has approximately 17,000 inhabitants. The city is closely linked to the construction of the Hoover Dam, for which it was founded as a working settlement. A peculiarity of the city is that gambling is prohibited here. The city is a great starting point for tours of the Lake Mead area.

Henderson
The city of Henderson has approximately 260,000 inhabitants and is the second largest city in Nevada. The city is located in southern Nevada and basically belongs to the Las Vegas metropolitan region. Henderson was founded in 1953 as a location for magnesium mining. Henderson is not a suburb of Las Vegas, but is known for its reputation as a science location. Henderson is also an extremely pedestrian-friendly city.

Reno
The city of Reno with its approximately 220,000 inhabitants is located in western Nevada near the border with California and Lake Tahoe. The city is located on the eastern border of the Sierra Nevada. Reno was the gambling capital of the world until the 1950s, but gradually lost this reputation to the rapidly growing Las Vegas. Gambling is still very important to the city today, but it is nowhere near as pronounced. The city calls itself “The Biggest Little City In The World”. Visitors will not only find casinos and hotels here, but also interesting museums and beautiful landscapes in the surroundings of the city.

Las Vegas
Who doesn’t know the fabulous Las Vegas in the state of Nevada. This is without a doubt the “gambling capital of the world”, as confirmed by its nicknames “The Entertainment Capital of the World” and “Sin City”. Today, approximately 585,000 people live in the actual city in Las Vegas and even 2 million people live in the metropolitan region, making Las Vegas the largest city in Nevada. This growth was only possible due to the Hoover Dam and Lake Mead. The city never stands still and so it changed from the money laundering city of the mafia to the casino center and tries to acquire a family-friendly image these days. It is not only gambling that attracts tourists to the city, there are around 39 million a year, but also shows. So stars in Las Vegas like Elvis Presley, the Rat Pack, Frank Sinatra, Sammy Davis Jr., Dean Martin, Celine Dion, Johnny Cash, Elton John, the wizards Siegfried and Roy, David Copperfield, Criss Angel and many more. Las Vegas is also known for its numerous wedding chapels, where marriage is probably easier than anywhere else.

The most commonly used abbreviations about Nevada are NV which stands for Nevada. In the following table, you can see all acronyms related to Nevada, including abbreviations for airport, city, school, port, government, and etc. 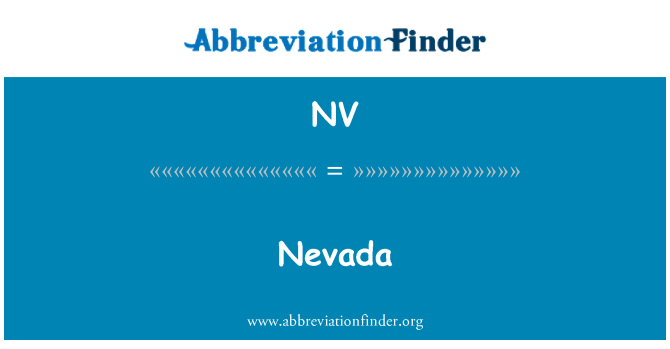