What is the abbreviation for Illinois state? Illinois is a state in the midwestern United States. The state is named after the Illinois Indians. But it is also known as the “Land of Lincoln”. Abraham Lincoln lived here for a long time, which can easily be seen in many places. In 1818 Illinois became the 21st state in the United States.

The state of Illinois covers an area of ​​149,998 km² – with approximately 12.9 million inhabitants. The capital of Illinois is not Chicago, but Springfield with approximately 120,000 inhabitants. In addition to the nickname “Land of Lincoln”, “The Prairie State” is another nickname of the state that mainly refers to the large areas of flat farmland. The state’s motto is “State sovereignty, national union”.

The state of Illinois borders Wisconsin in the north, Indiana and Kentucky in the west and southwest, and Missouri and Iowa in the southeast and east. Illinois has an economic diversity that extends from the cultivation of corn and soy (corn belt) and wheat to agricultural machinery, such as through John Deere, to industrial production (rust belt). Chicago is the region’s leading industrial and transport center. Until 2008 Barack Obama, the 44th President of the United States, lived in Chicago, from 2005 to 2008 he was active as a junior senator for Illinois in the United States Senate.

The central and southern part of Illinois also lies in the so-called tornado Alley. This is a particularly tornado-rich area in the Midwestern United States, where over a thousand large and small tornadoes roam across the country each year, especially in the spring. The US states of Oklahoma, Arkansas and Missouri are entirely within Tornado Alley. Tornado Alley also includes the northeastern part of Texas, the north of Louisiana, the northwest of Mississippi, the southwest of Indiana and parts of Nebraska, as well as smaller parts of Tennessee and Kentucky.

Interesting note
Since the discoverer of Pluto (1930) – Clyde William Tombaugh (1906-1997) – was born in Illinois, the downgrading of the Pluto by the International Astronomical Union (IAU) on August 24, 2006 to the minor planet was not accepted here. In Illinois, Pluto is still considered the ninth planet in our solar system.

Springfield
Springfield is the capital of Illinois and has approximately 116,000 inhabitants, making it the sixth largest city in Illinois. There are even 200,000 people living in the metropolitan area, but Springfield is much smaller than Chicago and is in the picture of former President Abraham Lincoln, who worked as a lawyer here for some time. The city was founded in 1821 and is centrally located in Illinois.

The city also has a rather dark history. So in 1908 there were serious “racial riots” which led to the murder of 2 African Americans. The city has also been hit twice by tornadoes in its history, in 1957 and in 2006. The main attractions in Springfield are of course closely related to Abraham Lincoln such as the Lincoln Home, the Lincoln Presidential Library & Museum and the Lincoln-Herdon Law Offices.

Aurora
The city of Aurora in northeastern Illinois has approximately 200,000 residents. This makes the city founded in 1834 the second largest in the state after Chicago. The city is also included in the Chicago Metropolitan Region. The city’s nickname “City of Lights” comes from the fact that the city was one of the first to introduce electric street lighting. From a tourist point of view, the city is particularly interesting because of the different architectural styles that can be found in the city, but there is also no shortage of theaters and museums.

Chicago
Chicago in northeastern Illinois is the largest city in the state of Illinois and has approximately 2.9 million inhabitants.

Galena
This very small town with 3,500 inhabitants in the far northwest of Illinois is a popular excursion destination and the biggest attraction of the entire area. In its heyday in the middle of the 19th century, the city rose to industrial center by mining lead in the surrounding mines. After the Civil War, Galena was almost completely abandoned and only restored in the 1960s. Sights include the Ulysses S. Grant Home and the Italian Belvedere Mansion.

Joliet
The city of Joliet has approximately 150,000 residents, making it the fourth largest city in Illinois. Joliet is located in northeastern Illinois, near the city of Chicago. The city was founded in 1852. Today visitors can find several attractions in the city. For example, here is the Chicagoland Speedway, where NASCAR and indie races take place. Furthermore, in Joliet there is the Joliet Correctional Center, a former state prison, which is probably best known as the backdrop for numerous series and films such as the Blues Brothers. Those who feel the urge to gamble can try their luck at two riverboat casinos in Joliet.

Nauvoo
The city of Nauvoo in western Illinois on the border with Iowa has only about 1,000 residents, but was founded in 1840 by Joseph Smith. This is considered the Mormon founder of religion. Today the residents of Nauvoo are mostly Catholic, but Mormon buildings can still be found here.

Peoria
The city of Peoria has approximately 115,000 inhabitants and is considered the model city of the American Midwest. This means that for many new products, the city of Peoria is the first test location to find out whether the products will prevail.

Petersburg
Petersburg is a small town with around 2,300 inhabitants located approximately 32 km north of Springfield. Petersburg is interesting because the border village of New Salem, where Abraham Lincoln first worked as a seller, clerk, and postmaster when he came to Illinois in 1831, is replicated at Lincoln’s New Salem State Historic Site.

Quad Cities
This is an amalgamation of four towns on the Mississippi. Moline and Rock Island in Illinois and Davenport and Bettendorf in Iowa. Particularly worth seeing is the pretty city center of Rock Island with numerous cafés and pubs, as well as the island of Rock Island, which was used as a weapon store and a prisoner of war camp during the civil war and where there is now a weapon museum and a civil war cemetery. Moline is the headquarters of John Deere, which produces tractors and other agricultural machinery.

Rockford
Rockford has approximately 150,000 residents and is located in northern Illinois. The state’s third largest city was founded in 1834. In addition to the city’s museums, Rockford is particularly interesting in summer, as there are extensive and protected forests around the city that invite you to relax. Hence the nickname of the city “Forest City”.

The most commonly used abbreviations about Illinois are IL which stands for Illinois. In the following table, you can see all acronyms related to Illinois, including abbreviations for airport, city, school, port, government, and etc. 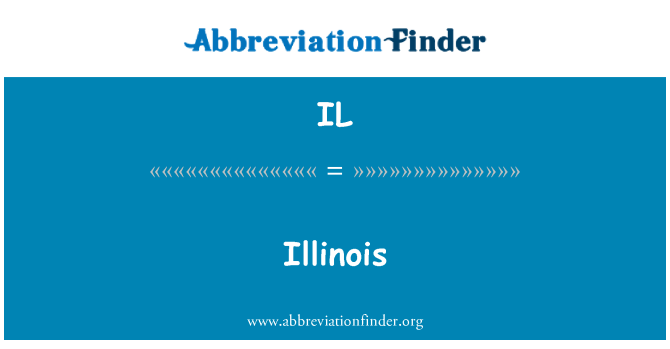