What is the abbreviation for Missouri state? Missouri is located in the Midwestern United States and borders the states of Iowa, Illinois, Kentucky, Tennessee, Arkansas, Oklahoma, Kansas and Nebraska. The state’s name comes from the Missouri River and the Missouri Indians and means “river of the big canoes”. The state’s unofficial nickname is The Show-Me State and its motto is “Salus populi suprema lex esto” (The salvation of the people is the highest law).

The state of Missouri covers an area of ​​180,533 km² – with around 6 million inhabitants. The capital of Missouri is Jefferson City with approximately 50,000 inhabitants. Missouri became the 24th state to join the Union in 1821. The Mississippi and Missouri rivers flow through the area and are important transportation routes for industrial products and raw materials. Tourists are drawn to the unique Missouri landscape with rugged mountains, raging rivers and vast forests. Lovers of literature will be interested to know that Thomas Stearns Eliot was born in St. Louis in 1888. But soon afterwards he went to Great Britain and became British citizen in 1927 and received the Nobel Prize for Literature in 1948.

Missouri is also located in the so-called Tornado Alley. This is a particularly tornado-rich area in the Midwestern United States, where over a thousand large and small tornadoes roam across the country each year, especially in the spring. The US states of Oklahoma, Arkansas and Missouri are entirely within Tornado Alley. The northeastern part of Texas, the north of Louisiana, the northwestern part of Mississippi, central and southern Illinois, the southwestern Indiana and parts of Nebraska as well as smaller parts of Tennessee and Kentucky count to Tornado Alley. On May 22, 2011, an approximately 1 km wide tornado devastated large parts of the 50,000-inhabitant town of Joplin – located on the Arkansas border. Around 2,000 houses were destroyed and 151 people lost their lives while around 900 were injured – some of them seriously.

Jefferson City
The city of Jefferson City with approximately 43,000 inhabitants is the capital of the state of Missouri. The city was founded in 1821 and because of its central location it was declared the capital. The city is named after the 3rd President of the United States, Thomas Jefferson. The city is on the banks of the Missouri River and visitors to the city will find interesting historical buildings.

Branson
The small town of Branson in southern Missouri, near the border with the state of Arkansas, has approximately 6,000 inhabitants. Although the city is relatively small, it still attracts many visitors who are either looking for recreation in nature, for example around the lakes around Branson, or entertainment in one of the many shows in Branson. For many visitors, Branson has a reputation for being a family-friendly Las Vegas.

Columbia
Approximately 110,000 people live in the city of Columbia, which was founded in 1806, making Columbia the fifth largest city in Missouri. The city is known as a student city and approximately 30,000 University of Missouri students live here. The campus of the university is very worth seeing and so here you can find the second most photographed scenery of the USA – the pillars in front of Jesse Hall.

Hermann
The small town of Hermann in the east of Missouri has only about 2,600 inhabitants, but is very popular as a destination. The city was founded in 1842 by the German Settlement Society in Pennsylvania and the town is named after Hermann the Cheruscan. Hermann is known for his wine growing and is considered the “sausage center” Missouri. Due to the town’s German roots, there is an annual May and October festival here.

Kansas City
Kansas City with its approximately 460,000 inhabitants is located in the northwest of Missouri on the border with the state of Kansas but not as the name would suggest. In the metropolitan region, which also extends to the state of Kansas, 2 million people live. This makes Kansas City not only the largest city in Missouri, but also the second largest conurbation in the region. The city was founded in 1853 and today bears the nicknames City of Fountains and Heart of America. This is because Kansas City has the most fountains in the world after Rome. Kansas City also has many boulevards. From a tourist point of view, the city’s theaters and museums complete the offer. Nevertheless, Kansas City is not overcrowded with tourists and is therefore ideal for a relaxing stay.Hanover.

Springfield
The city of Springfield in southwestern Missouri has approximately 160,000 residents, making it the largest Springfield in the entire United States and the third largest city in Missouri. The city was founded in 1838 and today there are even 440,000 people living in the metropolitan region. The city’s nickname, The Queen City of the Ozarks, shows the importance of the city in the Ozarks. Springfield is also known as Birthplace of Route 66 and of course the most famous street in the world also runs through Springfield. Springfield offers visitors museums, theaters and all other amenities of a city, but also the proximity to the nature of the Ozarks and is therefore a “base camp” for trips to the region.

St. Louis
With its approximately 320,000 inhabitants, St. Louis is the second largest city in Missouri and if you look at the metropolitan region of the city with its approximately 2.9 million people, there is no bigger one in Missouri. The city is located in the east of the state on the border with the state of Illinois. St. Louis offers its visitors so much that it is impossible to list everything here. It is even better to visit many of the attractions in St. Louis for free. Just like the city’s landmark, the Gateway Arch. In addition to countless museums and theaters, you can also walk just 15 km and travel to Illinois to the UNESCO World Heritage Site of Cahokia Mounds.

The most commonly used abbreviations about Missouri are MO which stands for Missouri. In the following table, you can see all acronyms related to Missouri, including abbreviations for airport, city, school, port, government, and etc. 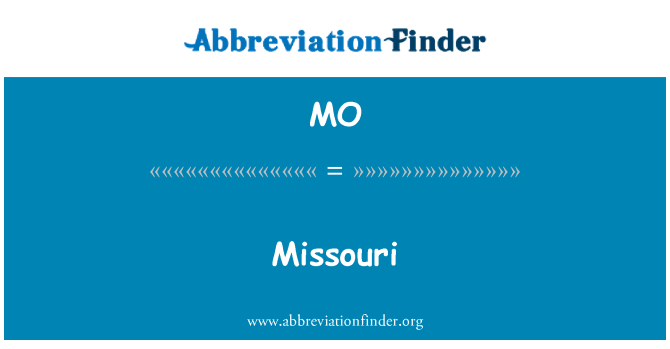