What is the abbreviation for Kansas state? The state of Kansas is located in the geographic center of the United States and is one of the states of the Midwest. Kansas borders Nebraska in the north, Missouri in the east, Oklahoma in the south and Colorado in the west.
The state was named after the Kansas River that runs through in. This in turn is named after the tribe of the Kansa Indians, who lived in the area of ​​northeastern Kansas and eastern Nebraska.

The state’s economy is dominated by agriculture, particularly the cultivation of wheat and corn, and cattle farming. Kansas is the United States’ wheat producer and the second largest beef producer. The largest natural gas field in the United States is also located in Kansas. The topography of Kansas is relatively flat. The western part of the state, a good two thirds, is in the Central Plains region and the eastern part, the remaining third, is hilly and lightly forested. Surprisingly, the state’s highest point, Mount Sunflower, is located in the far west of the state on the border with the state of Colorado.

Although Kansas is not really a tourist hotspot, you can experience a lot here. Many historic buildings and small towns give a wild west feeling. The state does not have the big, well-known attractions or highlights, but that is exactly what makes it so charming, it is important to discover the small or the big from unusual perspectives. For example, the huge sunflower fields of the state, or on a flight over the state, the many circular fields of agriculture. Kansas is also located in the so-called tornado Alley. This is a particularly tornado-rich area in the Midwestern United States, where over a thousand large and small tornadoes roam across the country each year, especially in the spring. The US states of Oklahoma, Arkansas and Missouri are entirely within Tornado Alley. Tornado Alley also includes the northeastern part of Texas, the north of Louisiana, the northwestern part of Mississippi, central and southern Illinois and the southwest of Indiana as well as smaller parts of Tennessee and Kentucky.

Topeka
The city of Topeka is located in the northeast of Kansas and is the fourth largest city in Kansas with approximately 127,000 inhabitants in the urban area proper, as well as the state capital. Around 230,000 people live in the city’s metropolitan area. The city was founded in 1854. The name of the city comes from the Kansa language and means something like “digging for good potatoes”. In 1954 Topeka was one of four places where segregation in schools was challenged. The city offers visitors some historical buildings, such as the State Capitol and Brown v. Board of Education National Historic Site. During the month of March 2010, Topeka changed its name to Google.

Wichita
The city of Wichita is located in central southern Kansas and is the state’s largest city with approximately 382,000 residents. The city is an economic center of the state and is home to large aerospace companies such as Boeing, Cessna, Learjet and Hawker Beechcraft. The name of the city comes from the Indian tribe of the Wichita who used to live here. Wichita has had the title of a city since 1870. In addition, Wichita State University, the largest university in Kansas and other universities shape the cityscape and cultural offerings within the city. Of particular interest is the Old Town district, where many historic buildings can be found.

Abilene
The small town of Abilene is located in central Kansas and was founded in 1857 as a small stagecoach stop. The city was the first in the USA to have its own train station for loading cattle from Texas. Abilene’s fame, however, became known as the place where the future US President Dwight D. Eisenhower grew up.

Dodge City
The city of Dodge City is a very historic city. With a population of around 27,000, the city in southwest Kansas is not one of the largest cities, but still offers a lot to visitors. The city emerged from the former Fort Dodge and still stands for a real wild west town. It was the same in the 1880s and 90s. There was a wild west life with saloons, gambling, brothels and everything that goes with it. Even today, the sights of the city immerse the visitor in these past days.

Emporia
The city of Emporia is located in the east of Kansas in the Flint Hills region and has approximately 25,000 inhabitants. The prairie town surprises its visitors with several historic buildings.

Lawrence
The city of Lawrence is located in northeast Kansas and has approximately 80,000 residents in the city and approximately 100,000 in the metropolitan area. However, the population fluctuates more or less because Lawrence is a university city with the University of Kansas. Accordingly, visitors will find cultural offers that are mostly aimed at students.

Kansas City
Kansas City is the third largest city in Kansas with approximately 145,000 inhabitants. However, this is only the part of the city that is Kansas, the other part is on the other side of the Missouri River and belongs to the state of Missouri. Although the part of the city in Kansas is much smaller, visitors will also find some attractions here, such as the Scottish Rite Temple or the Rosedale World War I Memorial Arch.

The most commonly used abbreviations about Kansas are KS which stands for Kansas. In the following table, you can see all acronyms related to Kansas, including abbreviations for airport, city, school, port, government, and etc. 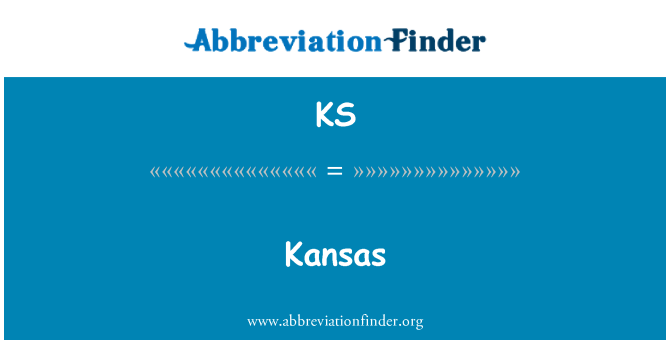