What is the abbreviation for Minnesota state? The name of the state comes from the language of the Dakota (Sioux) Indians and means something like “water reflecting the sky”. Minnesota also has several nicknames such as “North Star State” and “The Gopher State”.
However, the most important nickname is “Land of 10,000 Lakes”. This is even an understatement because there are 11,843 lakes in Minnesota that are larger than 40,000 m².
The official state motto of Minnesota is “L’Étoile du Nord” (The Star of the North).

The state of Minnesota covers an area of ​​225,181 km², in this regard the twelfth largest state in the United States. About 5.38 million people live in Minnesota, two thirds of whom live in the Twin Cities metropolitan area. This metropolitan area includes the cities of Minneapolis and Saint Paul. The latter, i.e. Saint Paul, is the capital of the state with approximately 290,000 inhabitants in the urban area proper. Minnesota was founded on May 11, 1858 as the 32nd state of the United States. A large proportion of Minnesota’s residents have German or Scandinavian ancestors.

The state’s economy, like the economy of many other states, has undergone major changes in recent decades. The largest part is in the service sector, but Minnesota remains dominated by agriculture. The cultivation of peas, sugar beets and sweet corn is particularly intensive. Tourism is a growing industry and is primarily aimed at visitors who long for untouched landscapes.

Minnesota’s topography is relatively flat. This has to do with the massive glaciers that are at least one kilometer thick and have shaped today’s topography over a long period of time. The glaciers disappeared about 12,000 years ago. Nowadays only the extreme northeast, the so-called Arrowhead Country, is a bit hilly or mountainous. Unsurprisingly, the state’s highest point, Eagle Mountain, is also here in the far northeast. Eagle Mountain is only about 21 km from the deepest point in Minnesota, the coast of Lake Superior (Upper Lake). The northern tip of Minnesota, which often protrudes into the Lake Woods, is the northernmost point of the “Continental United States” (the 48 contiguous US states on the North American continent) and lies north of the 49th parallel.

Minnesota is an extremely interesting vacation destination for all nature lovers, because for the most part there is still little untouched nature. If you want to enjoy these landscapes, we recommend the Voyageurs National Park, the Big Stone National Wildlife Refuge, the Frontenac State Park or the Alexander Ramsey Park, to name just a few attractions. But even those who are not enthusiastic about nature can find something for their taste in Minnesota with museums such as the Walker Art Center or the magnificent buildings such as the Cathedral of St. Paul.

Saint Paul
The city of Saint Paul is located in central Minnesota and is the capital of the state with a population of approximately 290,000. In the metropolitan region of the Twin Cities, consisting of Saint Paul and Minneapolis, 3.3 million people live. Saint Paul has been a city since 1854 and has been the state capital since then. The city, or the twin cities, is the cultural, scientific and economic center of the region. Accordingly, visitors will find a wide range of sights here.

Minneapolis
The city of Minneapolis is located in central Minnesota and is the largest city in the state with a population of approximately 3920,000. In the metropolitan region of the Twin Cities, consisting of Minneapolis and Saint Paul, 3.3 million people live. Minneapolis has been a city since 1867, even if the development of the city goes back further. The city, or the twin cities, is the cultural, scientific and economic center of the region. Accordingly, visitors will find a wide range of sights here.

Duluth
The city of Duluth is in northern Minnesota, on the shores of Lake Superior, and has approximately 86,000 residents. This makes Duluth the fourth largest city in Minnesota. In the “Twin Ports” metropolitan region, which also includes the city of Superior in Wisconsin, 280,000 people live. Duluth is considered one of the most beautiful cities in the entire Midwest. A larger scale settlement of the area took place from the 1850s with the discovery of copper deposits and since 1857 the settlement was officially called Duluth and was run as a city.

In the following years, the city prospered due to the canal connections between the Great Lakes and the associated navigable connection to the Atlantic Ocean. In the 1970s, however, Duluth also felt the industrial decline of the region. Since then, economic activity has increasingly shifted to tourism. However, Duluth was and is a port city. Interesting sights of the city are its port, especially the Aerial Lift Bridge and the historic Fitger’s Brewery. An excursion to the Enger Tower, which offers an excellent view of the city, is also recommended. The city’s cultural offerings are in the Downtown district and a large number of cafés and shops can be found in the Canal Park district. The city’s most famous son is surely Bob Dylan, who was born here on May 24, 1941 as Robert Allen Zimmerman. ”

Rochester
The city of Rochester has approximately 107,000 residents, making it the third largest city in Minnesota. Rochester is located in the extreme southeast of Minnesota on the banks of the Zumbro River. The city was founded in 1854, when George Head founded the city and named it after his hometown Rochester in the state of New York. The city’s most famous son is certainly Charles Horace Mayo, the founder of the world-famous Mayo clinics.
The city’s Mayo Clinic is one of the most important employers and has a dominant effect on the entire economy of the city. In addition to the actual clinic, the former home of Charles Horace Mayo, the Mayowood Mansion, is also very worth seeing. A visit to the Assisi Heights and the Rochester Art Center.

St. Cloud
St. Cloud is in central Minnesota and has approximately 66,000 residents. St. Cloud can be attributed to the metropolitan region of the Twin Cities. The city was founded in 1856 after the region was opened to settlers in 1851. Nowadays, St. Cloud can rightly be called a college town, with the St. Cloud State University, the St Cloud Technical College, the College of St. Benedict and St. John’s University having many higher educational institutions.
With its Munsinger Gardens and Clemens Gardens and its Stearns History Museum, St. Cloud offers its visitors top attractions. Of course, that’s not all.

The most commonly used abbreviations about Minnesota are MN which stands for Minnesota. In the following table, you can see all acronyms related to Minnesota, including abbreviations for airport, city, school, port, government, and etc. 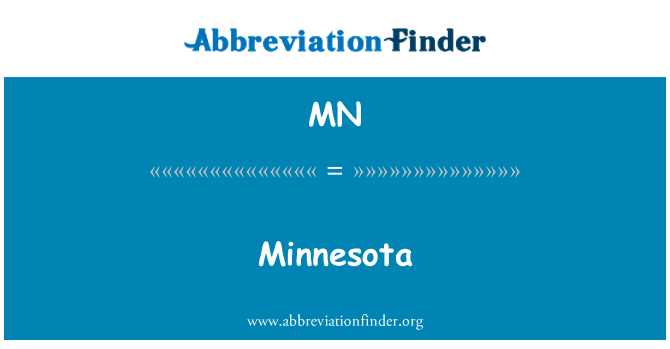