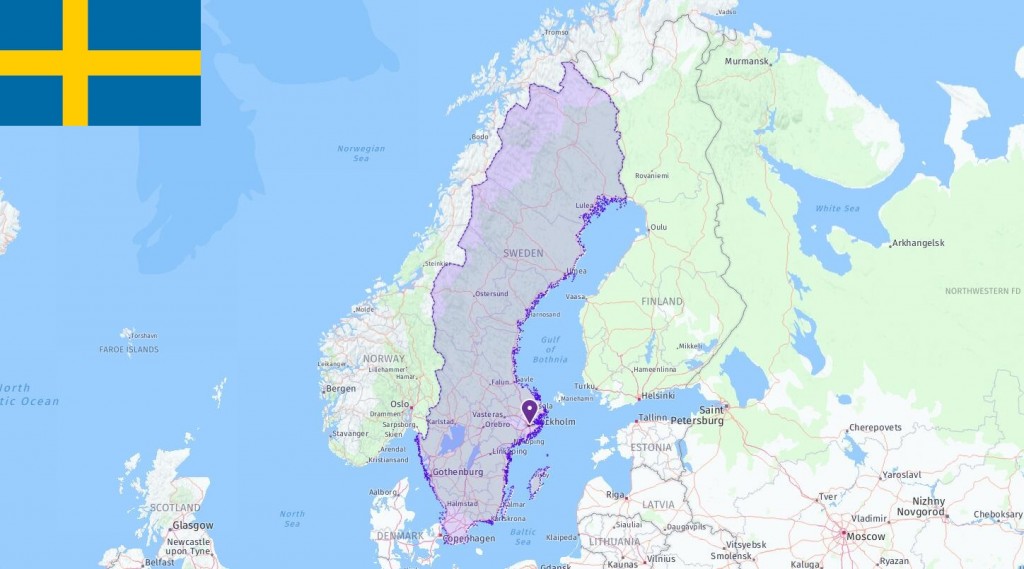 The most commonly used abbreviations about Sweden are SEwhich stands for Sweden and SEK which means Swedish krona (Sweden currency). In the following table, you can see all acronyms related to Sweden, including abbreviations for airport, city, school, port, government, and etc. 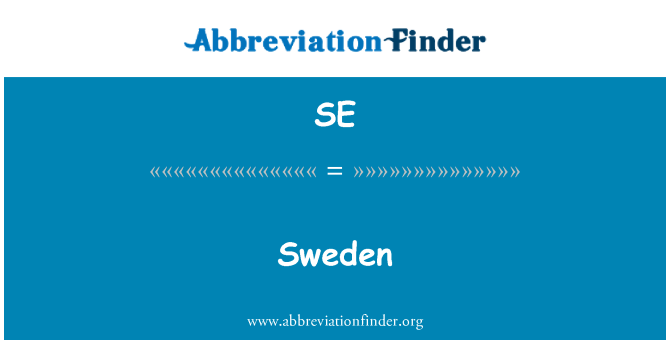 The landscape is very similar to the Norwegian one with a lot of highlands and some mountain areas in the north. The middle part of Sweden has fertile areas facing the coast, and here the country’s factories and industry are located. In the south, where the population is densest, agriculture is run. In addition, the large islands, Öland and Gotland, belong to Sweden.

The climate varies in different parts of the country. In the north, winters are cold and snowy, while summers can be hot. In the southern part of Sweden, the climate is milder all year round. The Gulf Stream in the Atlantic creates a warmer climate in Sweden than elsewhere so far north on the globe.

The Viking Age lasted from the late 700s to the middle of the 1000s. The Vikings from Scandinavia plundered and ravaged Europe. A unified kingdom has existed in southern Sweden since the 1100s. From 1397 the country was part of the Kalmar Union, and had a joint king with Denmark and Norway. Sweden became independent in 1523. Over the next centuries Sweden conquered lands around the Baltic Sea and became a great power. In line with the conquests, Sweden became more and more enemies. The largest of these was Russia, and in 1709 Sweden lost its central position in the Baltic Sea to the country. From 1814 to 1905, Norway and Sweden were in union. Sweden received Norway as a reward after taking a party against Napoleon during the Napoleonic wars, and as a patch on the wound for losing Finland to the Russians.

Sweden remained neutral during both world wars. Since Sweden had been out of World War II, they had a great head start on the other European countries after the end of the war. The Swedish industry was unscathed, and the economy grew rapidly when peace came. Under the Social Democrats Party, which ruled from 1945-76, the country built up a comprehensive welfare state. In 1995 Sweden became a member of the EU.

Sweden is a constitutional monarchy. The king is head of state, but has only a ceremonial role. Parliament, called the Riksdag, creates the country’s laws and adopts budgets. The government has the executive power. Sweden has a parliamentary system, and the government must have the support of the majority in parliament.

The Social Democrats were dominant in politics for much of the 20th century. In recent years, there has been a clearer split between the bourgeois parties on the one hand and a red-green cooperation on the other. The government switches between the blocks. Another development has been the emergence of the Swedish Democrats, an immigration-critical party on the outer right. In 2014, the party became the third largest in the Riksdag. This has created instability in politics because no parties will cooperate with them.

In foreign policy, Sweden has traditionally pursued a policy of neutrality without alliances. The country is still officially neutral, but entered the EU after the end of the Cold War. Now, the country is part of a common European foreign and security policy. International work within the UN has always been important for Sweden, and they are among the largest financial contributors to the UN.

Sweden has an open economy and depends on being able to sell its goods on the international market. Timber, minerals and hydropower have made Sweden Scandinavia’s foremost industrial country. In addition, they export electronics and telecommunications equipment. The service sector is the largest part of the economy. Sweden was hit hard by the financial crisis, but rescue packages and government investments led to high growth in the economy as early as 2010. Economic growth has since been slowed by the Euro crisis, but it is still stronger than in most other Western countries.

The EU is the main trading partner; especially the other Nordic countries and Germany. Trade with Asia and the United States has also grown in recent years, but still represents a small proportion of total foreign trade.

Sweden generally has good relations with the other countries in the Security Council. They are not members of NATO and have a foreign policy that says they should not enter into military alliances with others. Still, they stand strong with the Western powers. Sweden has been a member of the UN since 1946 and is one of the largest contributors. The UN is a central and integral part of Sweden’s foreign policy.

Relationships with the United States have generally been good, although there have sometimes been sparks – especially when it comes to US warfare.

Sweden has a somewhat tense relationship with Russia following Swedish accusations that Russian spies have operated in Sweden, something Russia has denied.

Sweden is concerned about the situation of the civilian population in Yemen. They believe that immediate humanitarian aid is crucial for other measures and instruments to have an effect, and for the country to stabilize over time.

At a meeting of Yemen in the Security Council in April 2018, Sweden’s representatives argued that Yemen’s ports and airports must be open and able to receive assistance and trade goods, and that the arms embargo on the Houthis must be followed. This is everyone’s responsibility, Sweden believes.

Sweden often puts human rights on the agenda and believes it is important that all countries follow international rules of the game. It is also important for Sweden to work to prevent conflict, as well as to work actively on maintaining peace after a conflict.

On a general basis, Sweden says that they will work for political solutions to conflicts, and not military ones. But like many other EU countries, Sweden has been criticized internationally for indirectly contributing to the war in Yemen through the sale of weapons and war materials to, among others, Saudi Arabia. These are export goods Sweden makes a lot of money. It is probably in Sweden’s interest to maintain a good trade relationship with Saudi Arabia, but at the same time the Swedish delegation should prepare to be criticized for both contributing and making money on the war in the Middle East. This can make it challenging for Sweden to maintain the status of a peace nation in the international community, and they must argue well why they want to work for political solutions to conflicts, and not military ones.