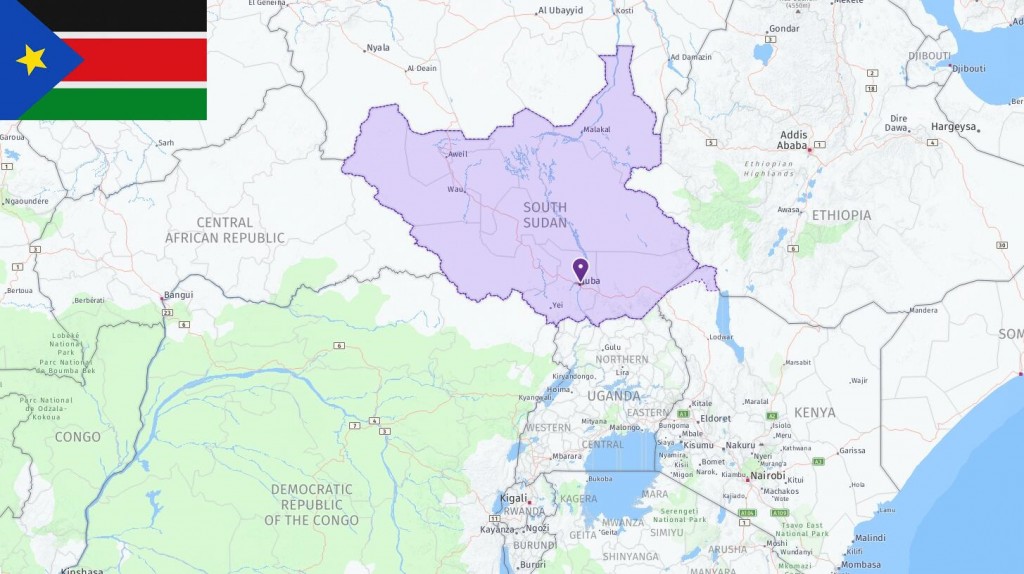 South Sudan is an inland state of varied nature. The terrain rises from low plains in the north to hills and mountains in the south. Towards the border with Uganda in the south, the highest mountain peaks reach over 3000 meters. Several rivers flow from the south to the north of the country, forming one of the world’s largest wetland areas. From there, the water flows further north into Sudan, as part of the White Nile. The mountain ranges on the border with Uganda have tropical climate, dense forest areas and abundant wildlife. The climate in the lowlands is warmer than in the mountains and has less rainfall.

Overgrazing in the country has led to widespread soil erosion and to the country’s rich species diversity being threatened. Oil spills in connection with oil drilling have led to contamination of the country’s large wetland areas. In addition, among other things, poor cleaning of sewage has led to the spread of diseases and bacteria in rivers and drinking water. Lack of clean drinking water is a major problem throughout the country. About 15 percent of South Sudan is a protected nature reserve, which includes the large wetland areas.

Little is known about South Sudan’s ancient history. The country’s impassable nature, with large swamps and wetlands, served as a natural barrier to invading powers, and it is believed that the local peoples lived in divided societies. Around the 18th century, Arab forces engaged in extensive slave trade with the African people in South Sudan. The slave trade led to great mistrust between the African people and the invading Arab forces. The distrust of the Arab and Muslim invasions increased beyond the 19th century, when Egyptian forces (with support from the United Kingdom) began to colonize areas in South Sudan.

In the 1950s, when the whole of Sudan gained independence from the British-Egyptian colonial power, there was great fear and dissatisfaction in South Sudan that the entire Sudan would be ruled by a Muslim and Arab government in Khartoum (in North Sudan). The mistrust, and the cultural, religious and ethnic differences between the people of the north and south led to civil war in 1955. With the exception of short breaks, this civil war lasted until 2005. After a 2011 referendum, South Sudan gained independence from Sudan. Since liberation, South Sudan has been characterized by civil war, ethnic conflict and widespread famine that can best be described as a humanitarian disaster.

South Sudan is a republic with a strong presidential government. The president is the head of state and government, and the chief of the military. The president has the power to declare war, announce death sentences or pardon prisoners. The country also has a parliament consisting of a Congress and a Senate representing the various states. Democracy in the country is unstable and corruption is widespread.

Since independence, South Sudan’s politics have been characterized by the relationship between the country’s more than 60 different ethnic groups. When the president kicked off the vice president, who belonged to another ethnic group, in 2013, old ethnic conflicts ignited and the country is now characterized by civil war. The country’s already widespread poverty and lack of infrastructure has made the civil war one of the world’s worst humanitarian disasters. Around one-third of the population is on the run, more than half of the country’s population is in dire need of vital help, and hundreds of thousands of people have been killed.

Women and children are particularly vulnerable in the Civil War. Rape has been used as part of the war, and many have been forced into prostitution. Genital mutilation of women is widespread, and forced marriage often occurs. Many children have also been sexually abused and recruited as child soldiers.

Prior to independence, South Sudan accounted for 3/4 of Sudan’s oil production. The oil was exported via pipes through Sudan, and the revenue was distributed 50/50 between the north and south. After independence, South Sudan believed that they should get more from oil revenues. However, they are dependent on exporting oil through Sudan, which is why the political situation between countries is crucial to the economy. In 2012, disagreement over oil transport costs through Sudan caused South Sudan to halt all oil production, the country’s most important source of revenue. This resulted in a rapidly rising inflation.

South Sudan lacks infrastructure, which slows economic development. Today, the country’s economy is based on oil and aid, mainly from the United States, the United Kingdom, the Netherlands and Norway. Many live as nomads who combine cattle farming and agriculture. There is hardly a service sector and no industry. The country depends on food imports from neighboring countries. It is expensive to transport food inland on bad roads, and therefore food prices are also high. This, combined with poverty and the civil war, has led to widespread famine. Large sections of the population are completely dependent on relief to survive.