What is the abbreviation for Connecticut state? The state of Connecticut is located in the northeastern United States and belongs to the region of New England. Connecticut borders on Massachusetts in the north, Rhode Island in the east, Long Island Sound in the south and thus on the Atlantic Ocean and west on the state of New York. The state was named after the Connecticut River, which divides the state in two.

The Connecticut River got its name from a French modification of the word “quinetucket” from the Algonkin language, which means “long tidal river”. Connecticut also has several nicknames, the most important of which are “The Constitution State” and “The Provisions State”. The former refers to the constitution of the former colony from 1638. This is considered the world’s oldest constitution. In 1959 the nickname “The Constitution State” was established by law and has been the official nickname of Connecticut since then. The nickname “The Provisions State” comes from George Washington himself, who wanted to underline the role of the state as a supplier of provisions and raw materials during the American War of Independence.

Connecticut was one of the thirteen colonies and declared independence from Britain in July 1777. On January 9, 1788, Connecticut became the fifth state in the United States. The first European settlers in the region were the Dutch, who founded their colony Nieuw Nederland here. However, this was ceded to England after the second Anglo-Dutch naval war, with the Treaty of Breda in 1667. Connecticut’s economy is very differentiated. There are agricultural producers here who rely on the cultivation of cereals, potatoes and also tobacco. The state’s industry is also strongly developed and the most important industries include the construction of machines, but also of aircraft engines and nuclear submarines.

Despite the relatively small size of the state, there are very different topographical conditions. For example, the northwest, the Litchfield Hills region, undulating nature and the southeast are known for its beaches and maritime influence. Connecticut offers visitors numerous historic buildings and educational institutions of the highest class. New Haven is home to the world’s most important university, Harvard and the Massachusetts Institute of Technology (MIT) in Massachusetts – it is Yale University, whose beginnings go back to 1701.

Well-known personalities from Connecticut include the actress Katharine Hepburn, the photographer Annie Leibovitz, the actress Meryl Streep and the famous writer Mark Twain. The latter lived and wrote in Hartford from 1871 to 1888, before going on trips to numerous countries. He also lived in Berlin for a while before returning to Connecticut, where he died on April 21, 1910. On November 12, 2008, Connecticut became the second state (after Massachusetts) to legalize same-sex marriage.

Hartford
With approximately 124,000 inhabitants, Hartford is the fourth largest city and capital of the state. As many as 1.2 million people live in the city’s metropolitan area. The city is located in the central northern part of the state on the banks of the Connecticut River. The history of the city goes back to 1614 when the Dutch explorer Adriaen Block built a fort here. The actual beginning of the city can be seen in 1635 with the arrival of English settlers. The city is nicknamed “Insurance Capital of the World” because the city is home to many major insurance companies. Visitors to the city are offered a lot, for example the oldest museum in the USA, the Wadsworth Atheneum.

New Haven
The city of New Haven in southwest Connecticut has approximately 130,000 residents and is arguably the most famous city in the state. New Haven is particularly well known as the seat of Yale University. The city was founded in 1638 by English Puritans. New Haven was initially designed in a pattern of 4 by 4 streets, making it the first planned city in North America. In the middle of the city is the New Haven Green. The city is also rich in architectural highlights. The city’s cultural scene is also remarkable. There are several state parks around the city such as East Rock Park, West Rock State Park and Sleeping Giant State Park.

Old Lyme
The small town of Old Lyme is located in the east of Connecticut on the Atlantic coast and has approximately 7,500 inhabitants. Old Lyme’s main street is a historic district and well worth seeing. The city, founded in 1855, has long been an artist colony, but mostly only in the summer months. The wonderful beaches of Old Lyme also invite you to visit. Other activities include kayaking, swimming, fishing and a hike to Watch Rock. The main attraction is likely to be the Florence Griswold Museum.

Mystic
The small town of Mystic is located in the east of Connecticut on the Atlantic coast. With its 4,200 inhabitants, the place is not one of the most important in the state, but due to its numerous attractions, it attracts a considerable number of tourists every year. Mystic Seaport is the largest maritime museum in the USA. Furthermore, the aquarium and the history of the village invite you to linger.

Essex
The small town of Essex in southern Connecticut has approximately 6,500 inhabitants and was founded in 1852. The city is made up of the three villages Essex Village, Centerbrook and Ivoryton. The city has a high proportion of historical buildings and is therefore worth a visit. A special highlight is the First Baptist Church of Essex. Other attractions include the Connecticut River Museum and the Essex Steam Train.

East Haddam
The city of East Haddam is in the southeast of Connecticut and has approximately 10,000 residents. The city was founded in 1734. The small town with the Gillette Castle State Park and the Goodspeed Opera House offers a lot for visitors.

The most commonly used abbreviations about Connecticut are CT which stands for Connecticut. In the following table, you can see all acronyms related to Connecticut, including abbreviations for airport, city, school, port, government, and etc. 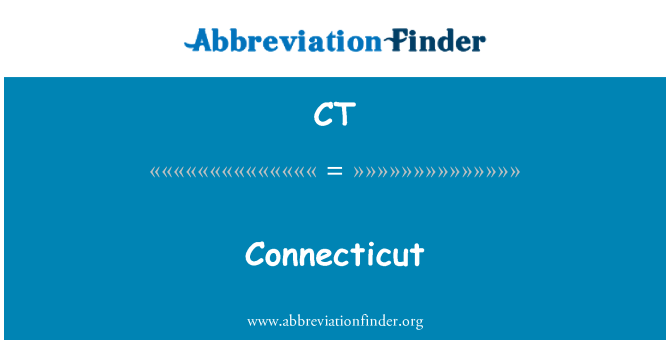